Messmer described the bill at the Senate Public Policy Committee meeting on Wednesday as a “once-in-a-generation” opportunity to update the state’s gambling laws.

The bill would allow Majestic Star Casino I and Majestic Star Casino II to relocate. The casinos' owner—soon to be Spectacle Entertainment—could move one of the casinos to a new location within the city of Gary. Spectacle could then bid to move the other casino to Vigo County (where Terre Haute is located), but it could face competition from other casinos in Indiana.

Spectacle Entertainment is a new company led by some of the same individuals who controlled Indianapolis-based Centaur Gaming before it was bought by Las Vegas-based Caesars Entertainment Corp. It is in the process of acquiring Majestic Star and Majestic Star II. Since the acquisition was announced in November, Spectacle has said it’s interested in relocating the casinos.

But the bill wouldn't hand the Vigo County location to Spectacle. Instead, other casino operators in the state could also bid to open a casino there with unused gambling “positions" from their existing casinos. The state caps the number of gambling positions at each location but some casinos fall under the number.

At least one other casino operator—Rising Star’s owner, Las Vegas-based Full House Resorts Inc.—has expressed interest. Ford filed legislation in 2017 that would have allowed Full House to take its 750 unused positions to Terre Haute, but the bill did not advance.

Messmer said creating the competitive bidding process would make sure Terre Haute gets the best possible proposal. The Indiana Gaming Commission would be responsible for reviewing the proposals and selecting the winner.

The potential casino moves have stirred up concerns across the state though.

Representatives for Ameristar Casino in East Chicago and Horseshoe Casino Hammond—plus elected officials from both of those communities—testified against the bill on Wednesday, arguing that allowing the Gary casinos to relocate would have a negative impact on nearby casinos and their local economies.

A few amendments approved by the committee on Wednesday were aimed at alleviating those concerns.

For example, the legislation as amended would give Hammond and East Chicago extra revenue in an attempt to offset any losses. It would also require any casino owner who is authorized to relocate a license to Vigo County to pay the city of Evansville $6 million.

Republican Sen. Vaneta Becker, who represents Evansville and suggested the amendment, said the money is meant to offset the expected loss in revenue if a casino opens in Terre Haute.

Any casino operator in Terre Haute would also have to pay the Indiana Horse Racing Commission $2 million that would be distributed to breed development funds and $3 million annually to the Indiana Department of Natural Resources to help fund preservation and maintenance of West Baden Springs Hotel.

Several Gary officials spoke in support of the bill, including former state Sen. Earline Rogers, who was an author of the original casino law.

“This has been a very clean industry, and it has helped so much,” Rogers said.

Gary Mayor Karen Freeman-Wilson told the committee about the city’s plans to turn Buffington Harbor, where the casinos are currently located, into a logistics and transportation hub, assuming the casinos are allowed to relocate.

“For the citizens of Gary, this is so much more than an opportunity to move a casino and capitalize on a new location,” Freeman-Wilson said, "although I would be the last person to underplay that opportunity.”

Community leaders from Terre Haute also spoke in favor of the bill.

“Our business community has been overwhelmingly supportive of this initiative,” said David Haynes, president of the Terre Haute Chamber of Commerce. 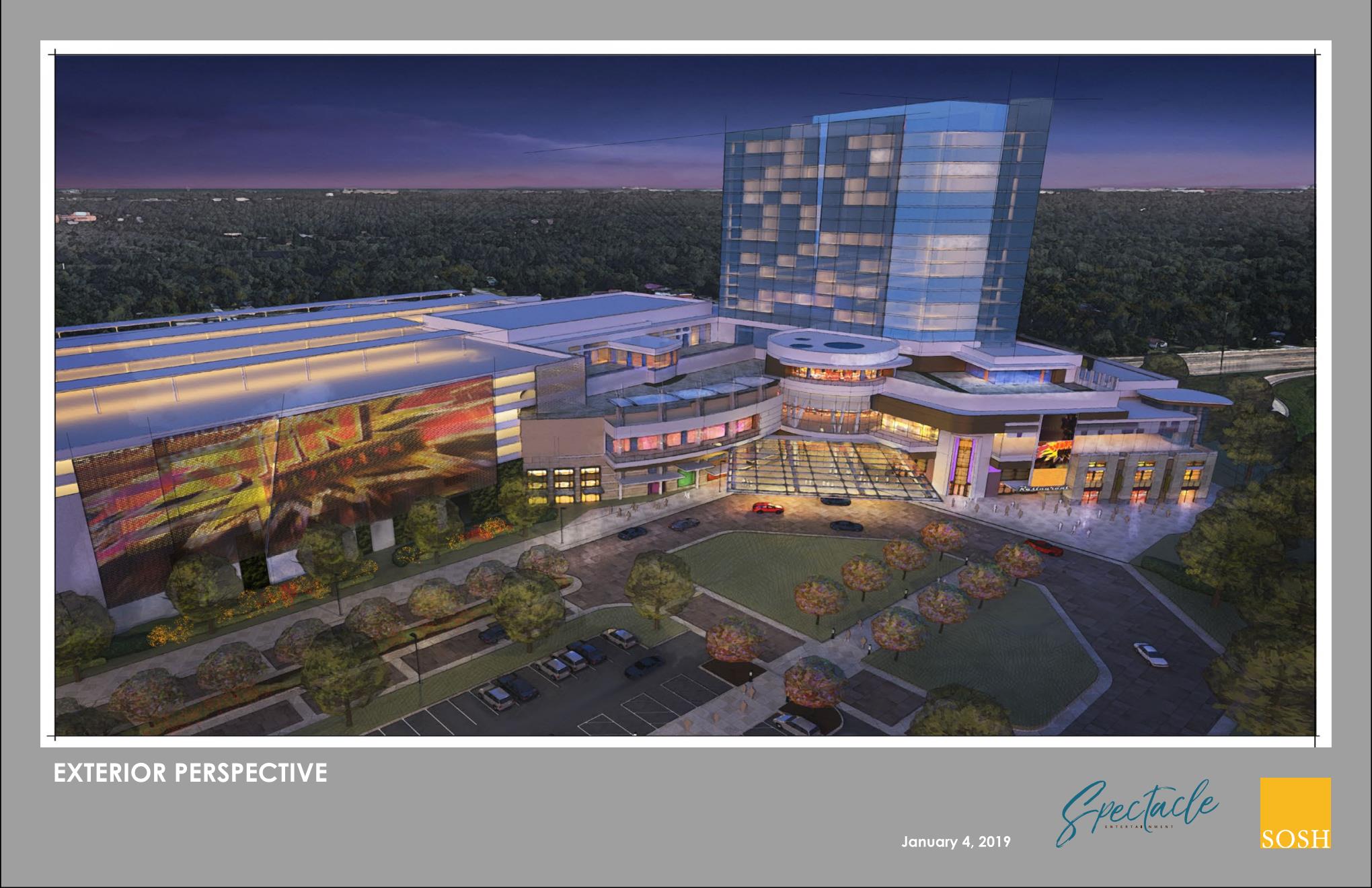 John Keeler, general counsel for Spectacle, said the new land-based casino in Gary—which is proposed to be located along the Interstate 80/Interstate 94 corridor—could be a $300 million development with a 200-room hotel (see rendering to the right). Spectacle expects to hire an additional 400 employees—on top of the existing 800 employees now working at Majestic Star and Majestic Star II .

Keeler said Spectacle officials believe Terre Haute would be a good location for another casino, and their project would cost between $100 million and $150 million (see rendering below). It would create 300-400 new jobs.

Altogether, Keeler said the two projects could generate $75 million in net new revenue for the state, and that’s after taking into reduced tax revenue from some other casinos. 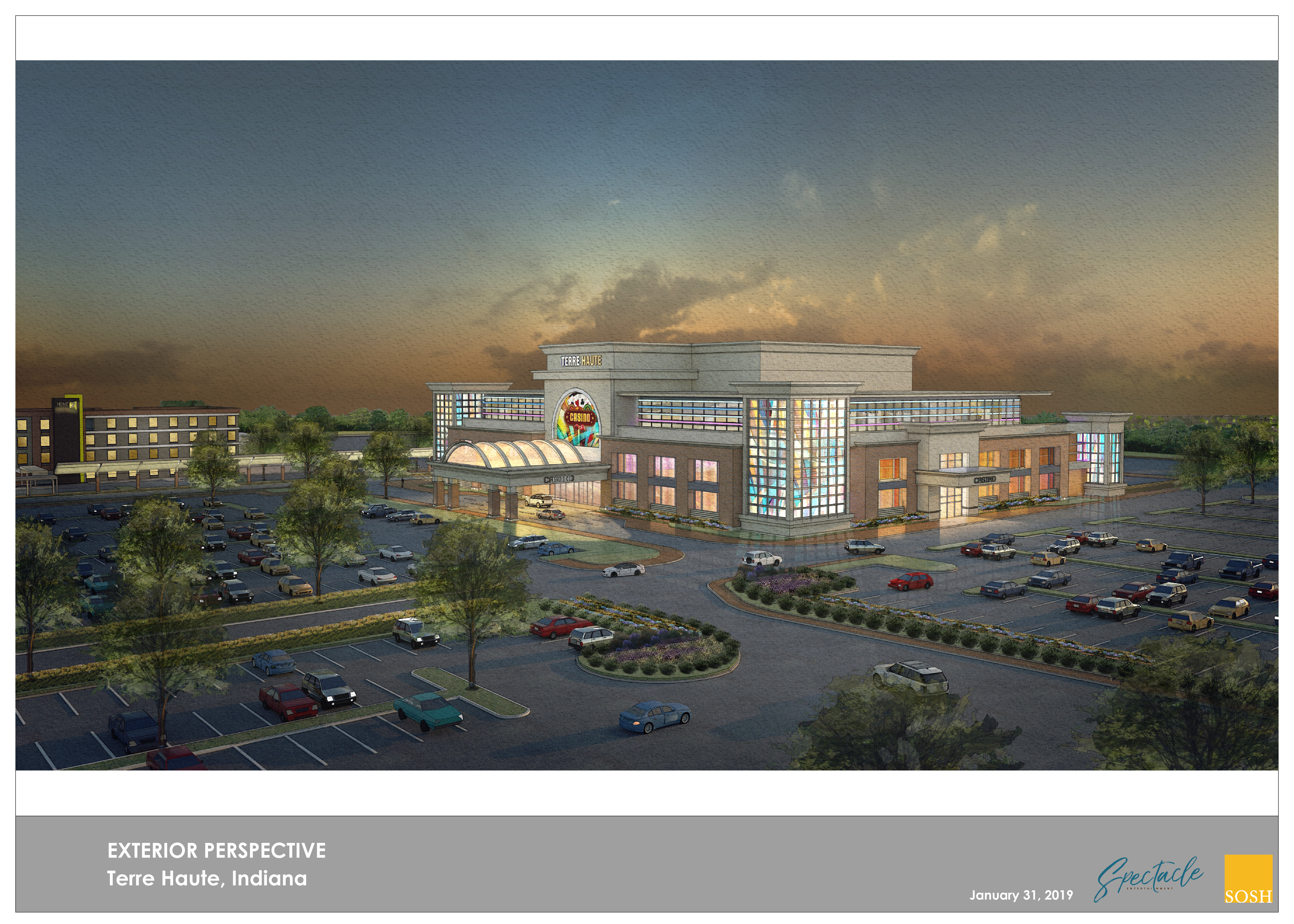 Sports betting draws concerns too
The committee also changed the sports betting language in SB 552 to reflect language that was part of a separate bill Ford had introduced.

The amended bill would allow mobile sports betting once someone has registered in person at a casino or off-track betting facility, give the Indiana Gaming Commission the responsibility of determining what sports could be bet on and require official league data for in-game bets only.

For casinos and sports leagues, the debate focused on whether official league data should be used at all.

Matt Bell, president of the Casino Association of Indiana, said if the state requires casinos to use official league data, it would essentially create a monopoly on that data and allow the leagues to control who can offer sports betting and who cannot.

No other state that has legalized sports gambling has required official league data to be used to determine the outcomes of wagers.

Bell reminded lawmakers that last year, the leagues wanted an integrity fee included in the legislation. “So now they’ve come back with a new way to line their pockets,” Bell said. “We don't believe theres a reason to create an official data monopoly.”

But Dan Emerson, chief legal officer for the Indianapolis Colts, said it would be “a prescription for disaster” if the state allowed multiple sources of data to be used, because there could be discrepancies in things like how many yards the ball moved or what a penalty call was.

The committee approved the bill 10-0, and it now goes to the Senate Appropriations Committee for further consideration.