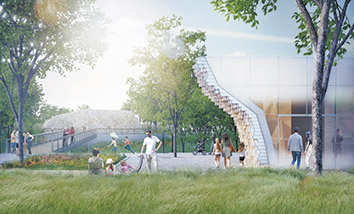 The city of Westfield plans to fund its proposed six-acre Grand Junction Plaza project with a $35 million bond that will be repaid with local income taxes and tax increment financing revenue.

The plan to use LIT and TIF funds was presented during a Westfield City Council meeting Monday night.

Mayor Andy Cook told the public initial costs came in at $42 million, but some early elements were eliminated from final plans, including a restaurant, lowering the cost.

City leaders have been planning to construct a downtown park southwest of Main and Union streets for more than a decade. The project arose from a comprehensive land-use plan first approved in 2008 when stakeholders developing the plan called for making downtown Westfield a more vibrant destination.

The property is bisected by Grassy Branch Creek and one of its tributaries, which will be a main focal point of the park. Early infrastructure work has stabilized the waterways to make them more accessible and to try to prevent downtown flooding.

A final design for the project, which will include a cafe and restaurant, an outdoor ice skating rink, a lawn, a performance stage and trails, was approved in January 2016. The plaza is expected to feature four quadrants with a series of modern glass-and-stone structures. The stage has been designed to meet the needs of the Indianapolis Symphony Orchestra but will also be able to accommodate smaller acts. And the ice skating loop will be able to host farmers markets, food trucks and similar festivals during warmer months.

Additionally, more than 500 feet of Jersey Street will be reconstructed so it can be used as an event corridor and an extension of Grand Junction Plaza.

City leaders have spent the past two years prepping the site for construction and coming up with a plan to pay for the improvements. Early on, city officials said they’d likely issue a TIF-backed bond.

Vicki Duncan Gardner, Westfield’s director of communications, told IBJ the city will issue a $35 million bond anticipation note. When payments come due, the city will first rely on LIT revenues until TIF revenues grow enough to cover the payments. There will be no tax increase to pay for the project, she said. With a bond anticipation note, payments would be delayed for five years, she said.

The property the plaza will be constructed on is within the Grand Junction TIF district. The city expects to use revenue from that TIF to repay the bond. The TIF district had about $1 million of revenue in 2017, according to the latest data available from the Department of Local Government Finance. City leaders expect that figure to grow in coming years.

City Councilor Cindy Spoljaric expressed concerns Monday night that the city is taking on too much debt, since Grand Park is still being paid for and the city has other projects in the works.

“I’m starting to get concerns about the picture overall,” she said. “I want to make sure we’re not overextending ourselves.”

She also said she’s heard the park would cost $1 million a year to operate and asked the city’s financial advisers to include those costs in figures that will be presented to the board next month. Operational costs weren’t included in the $35 million figure.

Cook told dozens of residents who packed Westfield’s City Hall that the city will make history with the project and do so within its means. City administrators feel “100 percent comfortable” with the $35 million price tag or they wouldn’t be presenting it, Cook said.

“Our job today is to create a place, to create a unique and special place in which people and families want to live,” he said. “This will truly be a legacy item for the city of Westfield.”

If the Westfield City Council approves the proposed funding plan, construction on the plaza could start as soon as this summer. A public hearing will be held March 11.

Construction is expected to be complete by 2021 if the project is approved. Work on Jersey Street wouldn’t begin until 2022.