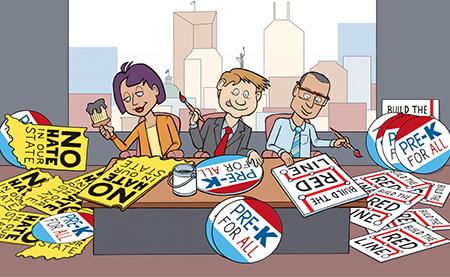 Legalizing same-sex marriage or adopting an anti-discrimination policy into state law might not seem like obvious top priorities for Indiana businesses, but in the past few years, some of the state’s largest companies have strongly spoken out about such matters.

To the leaders of some of those companies—Eli Lilly and Co., Cummins Inc. and Anthem—the issues are key to their business strategies.

“I think people were really surprised that we would see it as a business imperative,” Marya Rose, vice president and chief administrative officer for Cummins, said about same-sex marriage.

Cummins was one of the first major companies to offer domestic partner benefits in 2000 and lobby against a constitutional amendment that would have banned same-sex marriage in Indiana. The Indiana General Assembly debated the amendment several times over about 15 years, but it never passed the legislative threshold to put it on the ballot as a referendum for voters.

“It was pretty lonely there,” Rose said about the company’s initial opposition to the amendment. “I remember the first time we were out there, honestly, there was no big company with us. They just weren’t ready yet.”

In recent years, some of Indiana’s biggest companies and trade organizations, including the Indiana Chamber and the Indy Chamber, have publicly voiced opinions on a variety of social issues, including pre-kindergarten funding, gay rights, mass transportation and higher cigarette taxes.

Business leaders say many of the issues have a direct impact on their ability to attract and retain the best and brightest employees, so it has become a priority to lobby state and local leaders about them, just like they do for tax and regulatory policies.

“We can only make good business decisions when we have diverse thinking as part of those decisions,” she said.

This year, the top social issue for businesses has been the hate crimes legislation, which—as passed by the Indiana Senate—would enhance sentences for defendants convicted of crimes motivated by bias.

But the bill doesn’t define bias, and business leaders have stressed that it needs to include a list of specific victim categories, like race, religion and gender identity. So under the proposal advocated by business leaders, a defendant who acted out of bias against any of those specific groups—maybe because the victims were black or transgender—would face harsher penalties.

The Republican-controlled Senate stripped such a list from the bill’s language before passing it in February. Leaders in the Indiana House, which is also controlled by Republicans, have already made clear there is little appetite to reinsert the list.

Critics say business leaders seemed caught off guard when the Senate removed the list and hadn’t campaigned strongly enough to make sure that didn’t happen.

Rose acknowledged the outcome of the bias crimes debate so far has been frustrating and disappointing. But, she said, “We’re not even close to giving up hope. We are working very diligently to try to keep this momentum going.”

Businesses haven’t always been such public advocates for social issues, but that’s changed as attracting talent has become more difficult.

According to research from the Global Strategy Group, 79 percent of consumers say companies should take action on social issues, and 87 percent say companies have the power to influence change.

“For many years, consumers have had this appetite,” Hootkin said. “There has been a steady drumbeat for this.”

In Indiana, the spark was lit in part by the Religious Freedom Restoration Act, a bill the Legislature approved and then-Gov. Mike Pence signed into law in 2015. Opponents had argued the bill would allow companies to discriminate against the LGBT community, but many business leaders didn’t get significantly involved until a national uproar that put Indiana into the national spotlight.

At that point, some companies with Indiana operations, including Salesforce, threatened to cut planned investments; major conventions like Gen Con threatened to leave Indianapolis; and some states, including New York, banned their government employees from traveling here.

“Very few of us knew what was going on,” McDonald said.

“That is one good thing that came out of” RFRA, McDonald said. “A newfound sense of responsibility for some of the companies that were leading then or are leading now.”

Rose said she couldn’t believe how hard it was to rile up other business leaders about RFRA before it passed. But afterward, she said, it was clear alarms went off as the country started thinking about Indiana as an unwelcoming place.

“It’s hard to change that perspective if we don’t speak out publicly about the things we care about,” she said.

Speaking out about controversial social issues does come with the potential for backlash—whether that’s from employees who disagree with the company position threatening to leave or from customers boycotting the business.

But experts say larger companies can probably survive it, and leaders of those companies tend to say it’s worth the risk.

“We have a responsibility as a big company with a lot of employees and a lot of resources to help make change that makes the world better,” Rose said.

She said that’s one reason the company has lobbied for expanding the state’s pre-K program—the better education children can receive at an early age, the better the workforce will be in the long run.

McDonald said he has received negative pushback about certain positions he’s taken, but it doesn’t bother him and it won’t stop him from taking stands in the future.

“I’m not looking for approval ratings,” he said. “I’m not a politician where I have to gather votes.”

McDonald said he considers two things when weighing whether to speak publicly about an issue—how it could affect his company and how he feels about it personally.

“Those two things have to be in line,” he said.

RFRA, to him, easily passed the test as something that was unacceptable. And he understands that, given his position in the business community, his voice can make a difference.

“I know that I have a bully pulpit, and I know that it’s not going to last,” McDonald said. “I’ve just never been the guy that sits there and stays quiet hoping someone else will take on the issue.”

Hootkin said, in the past few years, she’s noticed consumers more willing to penalize companies for not taking action, as opposed to penalizing businesses for taking action.

She said the key for companies advocating on social issues is to make sure they explain the reasoningbehind their positions.