Home » March madness tips off with college sports under microscope 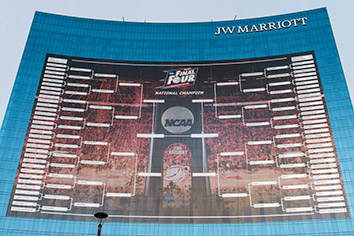 It’s hard to overstate the importance of March Madness to the Indianapolis-based NCAA.

The annual men’s basketball tournament, which kicks off in earnest Thursday, makes up roughly 80 percent of the association’s $1.1 billion in annual revenue. More than the college football playoffs, which the NCAA doesn’t own or operate, March Madness represents much of what college athletics aspires to be: An egalitarian, three-week event featuring future pro stars, where teams from schools with tiny budgets can shock those that are 20 times richer.

But this year, the NCAA faces more pressure than ever to reform its model. Legal challenges, scandals and athlete activism are convincing the public that colleges are getting rich exploiting their players. Major change seems imminent.

“There is going to be a day of reckoning,” said David Ridpath, a sports management professor at Ohio University and former president of the Drake Group, which lobbies to preserve academics amid the commercialization of college sports. “If anybody thinks we can hold on to this model, which has probably never worked as intended, they’re dreaming.”

The public increasingly agrees. A 2017 Seton Hall Sports Poll found 60 percent of people think a scholarship is sufficient compensation for college athletes, down from 71 percent in 2013. Forty percent believe athletes are exploited by not sharing in the revenue they generate, the highest number in the poll’s 10 years.

The NCAA is on the defensive. Three times in the past two weeks the Indianapolis-based organization has issued statements responding to court setbacks, an admissions scandal at elite schools and threatened legislation. In the most recent, the NCAA said it is “properly positioned” to make changes, and remains steadfast that its “member-made rules are essential to preserving college sports in the United States.”

The NCAA didn’t respond to requests for comment, but as games get underway across the country, here’s a rundown of some of those pressures:

Two weeks ago, a federal court in California issued a long-awaited ruling on the latest antitrust lawsuit against the NCAA. As she had a few years earlier, Judge Claudia Wilken opened the door for more money to flow to the athletes who help generate the billions that fuel college sports. Wilken stopped short of allowing salaries, but ruled that the NCAA can’t cap benefits given to athletes for anything school related.

The ruling could mark a significant shift in the way schools allocate money to football and men’s basketball players. Wilken’s decision also cast doubt on the NCAA’s long-held claim that amateur status for athletes is necessary to protect education. The NCAA, which has 90 days to appeal, said it agrees with parts of the ruling and disagrees with other parts.

That court case coincided with two separate federal investigations into corruption and bribery in college-sports recruiting. The first, specific to basketball, recently led to jail sentences for three men. It details the money paid to top recruits and their families in order to lure an athlete to a specific school.

The second, which became public last week, revealed that wealthy parents and their representatives bribed college coaches into helping nonathletes gain admission to top schools through sports teams. Both investigations are ongoing.

The two scandals, which have touched many Division I schools, could put the NCAA and its members in the crosshairs of the Justice Department, according to Arthur Middlemiss, a partner at Lewis Baach Kaufmann Middlemiss. In other businesses with repeated scandals, the DOJ has found institutions responsible, either because they turned a blind eye to the problem or failed to recognize and react to the risks.

“College sports is a huge enterprise,” Middlemiss said. “And it needs to do a better job of controlling where the money goes, because if it doesn’t, someone else is going to decide how to control it for them.”

Congress could step in. While many have advocated for the NCAA to lobby the government for an antitrust exemption — a nuclear option that would require reform in exchange for oversight and protection — lawmakers are pushing more immediate changes.

Last week, for example, Representative Mark Walker, a Republican from North Carolina, introduced a bipartisan bill that would allow college athletes to market themselves — instead of letting schools alone cut deals with sponsors.

“It’s time to bring equity to student-athletes and fix the injustices that exist in the current NCAA model,” Walker wrote on his website.

There are also a handful of organizations pressing for college athletes to gain more rights. Perhaps the best known, the National College Players Association, helped facilitate an attempt to unionize the football team at Northwestern University back in 2015. Earlier this week, attorney Tim Nevius, a former NCAA investigator, launched the College Athlete Advocacy Initiative to give legal aid to athletes as they fight for reform.

“We are working hard to get influential athletes, people, and voices together to capitalize on the growing movement for change,” Nevius said. “More people are realizing the depth of the NCAA’s exploitation and the extraordinary conflicts of interests between a school’s commercial interests and its educational mission.”

These are just a few examples of the pressures facing college sports. There’s also an upstart basketball league proposing pay-for-play rules to compete with the NCAA, increased talk about a possible athlete-led boycott of games, and an ever-growing disparity between have and have-not schools, leading to financial pressures at some colleges.

Then there’s legalized sports betting, which the NCAA has long opposed. Under-compensated college athletes could be more vulnerable to efforts to rig games. A scandal could undermine the popularity of college sports and cast the economic disparities in an even more negative light.

Even ESPN analyst Dick Vitale, a former coach and long-time defender of the status quo, is re-evaluating his position. “We got a tournament going on, and everyone’s making millions,” Vitale said in an interview with Esquire. “Let those kids be able to benefit!”