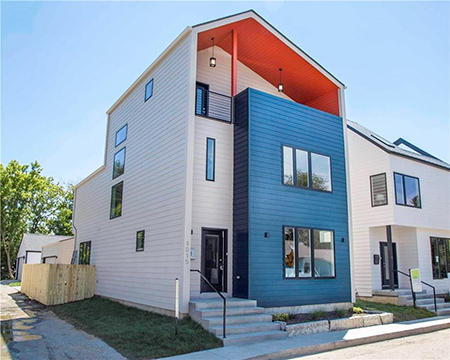 The lot was a triangle. Well, the four lots combined made one big triangle, with Interstate 65 running along the south and west sides, slicing into what were historically four rectangular plots of land.

Only one original house sat along that stretch of Orange Street—at the intersection with Ringgold Avenue—with a trailer and a shed in the yard and overgrown brush along the highway, where some homeless people had camped over the years. 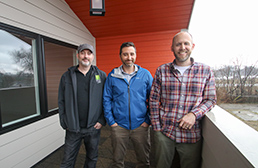 The lots were among the last available spaces to nab close to the main drag in Fountain Square, a neighborhood where Fisher and his family’s business, RCA Properties LLC, already owned substantial property. So he snapped them up, cleared the lots and called in reinforcements—primarily his brother Rex Fisher, a real estate agent at Plat Collective, and friend Jeffrey Morgan, owner of Green Square Design | Construct Inc.

“It was a little bit of a gamble,” Morgan said. “He overpaid for the lot, but there are not many opportunities to get properties like this.”

The three had worked together on other projects—although this would prove to be a design and regulatory challenge. There was the stuff typical for almost any Fountain Square project: getting variances for the amount of the property that could be covered by structure as well as the setback from the street and other property lines. 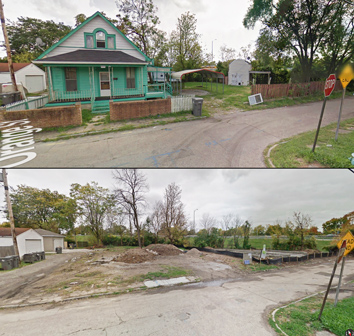 Construction of Interstate 65 decades ago sliced through four parcels on Orange Avenue. In 2016, at top, only one of four houses remained. Andrew Fisher of RCA Properties bought the land and cleared it for construction. (Photos courtesy of Google)

Andrew Fisher also wanted to redraw the lot lines so that the four plots became three—and needed special permission to make one of the lots an odd shape that allowed for all the houses to have garages. The middle home’s garage actually sits behind the house on the east end, meaning the middle lot is L-shaped.

In the end, though, the group received their approvals and Morgan set to work. The designs were meant to be modern but not wide open. The goal was to create an open flow, but one that still differentiated rooms and functions.

“The listing price is more about the way a home flows than it is about the finishes,” Rex Fisher said. “It’s about how a house works in someone’s daily life. That often gets overlooked.”

The group started building on the west end of the properties, nearest the interstate, and developed a home with extra-thick walls and insulation to cut out the highway noise—a feature it would eventually incorporate into all three houses. All three houses also feature balconies—in front, furthest away from the highway noise. 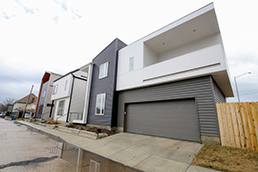 Because of the first lot’s wide, shallow shape, it also had something unusual for Fountain Square: an attached garage with access from the street. The house sold before it was finished.

The middle home—with the unusual L-shaped lot and detached garage—had the most modern interior, almost all black, white and gray. That house sold immediately to longtime tenants in another house owned by the Fishers.

The home on the east end was the last one the group finished—and the most expensive—with warmer finishes but modern lines. It went on the market briefly at $479,000 in the fall and will be back on this spring as the buying season ramps up.

The home is slightly wider than most of its Fountain Square brethren, meaning the living room doesn’t have the narrow feel that so many other newer construction urban homes do, even with a half wall—which lets in light from side windows—separating it from a front hall and stairs. 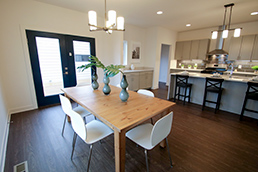 Modern French doors in the dining area lead onto a back deck. (IBJ photo/ Lesley Weidenbener)

The design of the first floor is open—but not wide open, with that half wall, a strategically placed utility closet and a slight bulkhead that differentiates the living from the kitchen. Gray shaker cabinets with a darker, longer-than usual gray subway tile define the kitchen. There’s a larger island with a quartz, waterfall counter.

“People love that,” Morgan said of the quartz, which runs down the vertical edge of the island.

The refrigerator is surrounded by pantry cabinets and set off by partial walls that Morgan says helps to separate food storage from food preparation. Buffet cabinets marry the kitchen with a dining area that has a set of modern French doors leading to a back deck.

The floors on the lower level look like wood but are actually a PVC product 3-D printed to look like wood. The printing goes deeper than a traditional laminate, which means the floor weathers scratches and dents more durably. “Everybody wants hardwoods but they get beat up,” said Andrew Fisher. 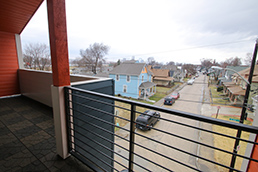 a balcony that overlooks Ringgold Avenue and has a distant view of the Indianapolis skyline. (IBJ photo/Lesley Weidenbener)

The home is three stories, with two guest bedrooms and a bath on the second floor, plus a master suite with a walk-in closet.

A bonus room and full bath are on the third floor—and so is the balcony with a view that takes in the still-redeveloping east end of Fountain Square, the interstate and the Indianapolis skyline in the distance.

The view is interesting, because the house sits at the spot where Ringgold Avenue dead ends into Orange Street, providing an unusual view straight down a street.

Outside is a two-car garage—detached but accessible without enduring rain drops by a covered walkway across the deck. A tiny side yard sports a bit of grass.

Out front is the only thing left of the parcels’ past. The team added sidewalks along Orange Street, and the work uncovered old curbs that separated the yards from the street. Morgan couldn’t resist them and reused the curb concrete to create front flower beds.•