Home » Amid tensions, plans for Hilton hotel towers on Pan Am Plaza advance 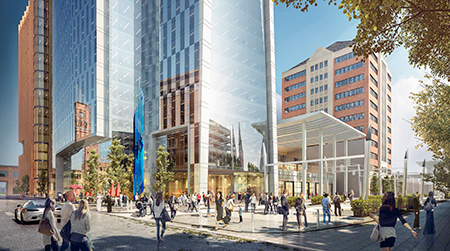 A powerful group of hoteliers that opposes a proposal to build a pair of Hilton hotels with a total of 1,414 rooms on Pan Am Plaza scored a victory in the Legislature. But the plan by Indianapolis-based developer Kite Realty Group Trust to construct the project remains very much alive.

“Productive conversations continue between the city, Capital Improvement Board and the developer,” said Chris Gahl, senior vice president of Visit Indy, which believes the convention industry needs the additional hotel capacity to fuel its next wave of growth.

The Capital Improvement Board last fall tapped Kite to serve as master developer for a publicly funded 80,000-square-foot expansion of the Indiana Convention Center on Pan Am Plaza and the two adjacent privately funded hotels.

The city plans to use $120 million in tax-increment financing to cover the cost of the convention center expansion and related infrastructure, including a walkway above Capitol Avenue connecting it to the Indiana Convention Center.

A sweeping CIB funding bill in the General Assembly had relied partly on the tax revenue the new Hiltons would generate—until it was amended April 8 to replace the proposed hotels with existing hotels elsewhere downtown.

The revised measure, which provides $270 million toward Bankers Life Fieldhouse renovations and shores up the finances of the quasi-governmental body, won final legislative approval April 23.

Chalk up the changes as a win for opponents of the Hiltons. If the General Assembly had passed a bill that counted on the tax revenue they’d generate, it might have given construction of the hotel towers an air of inevitability.

Now, critics hope to build on their momentum.

The opponents—including Merrillville-based developer White Lodging Services, owner of the JW Marriott and other downtown hotels—say they fear that building the Hiltons would create a glut of rooms, eroding the performance of existing properties and leaving them without the financial wherewithal to keep them in the tip-top shape convention planners expect.

“We would be concerned about the downtown hotel market even if these Hilton hotels weren’t being proposed,” said Mike Wells, president of Carmel-based REI Real Estate Services, which owns the Indianapolis Marriott Downtown with White Lodging.

That’s because of an unprecedented wave of hotel development across downtown—from the 316-room Hyatt House and Hyatt Place development that opened this spring across from Bankers Life Fieldhouse to a host of smaller projects, including a 150-room West Elm Hotel under construction at Bottleworks District on Massachusetts Avenue and a 180-room InterContinental Hotel planned near the Statehouse.

Even without the Hiltons, if all the hotel projects at some stage of planning or construction downtown came to fruition—a scenario experts say is unlikely—they would increase the inventory of downtown hotel rooms by more than 2,000, or 27 percent.

“We are in the 10th year of a hotel recovery,” Wells said. “You throw a recession in the mix in the next three years, along with additional supply, and that could be a very bad scenario.”

The opponents, who’ve launched a website and ad campaign to spread their message, have had two meetings with Mayor Joe Hogsett, most recently early this month.

Thomas Cook, the mayor’s chief of staff, said now that the legislative session has concluded, the city will launch project negotiations with Kite, with the goal of wrapping up an agreement by the end of this year.

“The mayor has consistently told all the stakeholders that he is committed to a collaborative process that accomplishes the basic goal we set out to address—to continue not to lose ground and gain ground in the convention, sports and entertainment industry that has become such an important economic driver,” Cook said.

Kite last year proposed building a 38-story, 814-room hotel—which would carry the Signia flag, a new, upscale Hilton brand—and a second, 600-room hotel. The Hilton brand for that hotel has not been announced.

The city originally had not sought to entangle the proposed Hiltons with the CIB funding bill, Cook said. He said that idea came from lawmakers drawn to the Hiltons as a source of tax revenue.

He said keeping the hotel project separate “allows us to negotiate with Kite on equal footing.”

One huge question mark is how much it would cost to build the hotels. Kite hasn’t provided an estimate, though hotel consultants say the tab likely would exceed $400,000 per room, or a total of $560 million.

Also unclear is how much of a public subsidy the city might provide. Hotel consultants say developers constructing U.S. convention hotels universally receive a subsidy. One in Louisville last year, in fact, received more than $100 million.

That’s because such projects include lots of amenities convention cities want—such as restaurants and meeting space—that otherwise would drag down the profit margin of the property.

But Cook said the city intends to provide public dollars for only the convention center expansion and infrastructure.

He said the city is “not considering in any way, shape or form a direct subsidy to the developer.”

White Lodging Chairman Bruce White said he considers the city’s $120 million investment in the convention center expansion and infrastructure a developer subsidy—since it will provide the Hiltons connected, convenient meeting space the hotels won’t have to build themselves.

He said convention hotels the size of the proposed Hiltons normally would have a total of more than 100,000 square feet of meeting space. The Hiltons are expected to have about 40,000 square feet.

“The fundamental point is the government is going in and oversubsidizing, disrupting a market that is barely at equilibrium,” White said.

City officials say Visit Indy would have unfettered access to the convention center space as needed.

“We’d never agree to a setup that would give away the convention center space,” Cook said.

But he said there might be ways the Hiltons could benefit from efficiencies that come with being connected to the expansion.

Possibilities to explore, he said, could range from operating a single loading dock for the three properties to using one kitchen to service more than one property.

For now, the two sides are standing by dueling hotel-market studies that reach starkly different conclusions about whether the downtown market could absorb the Hilton rooms.

According to the opponents’ study, by LW Hospitality Advisors, the downtown occupancy rate would decline from 73 percent this year to 64 percent in 2025.

The study done by HVS Consulting & Valuation for Visit Indy projects market occupancy falling from 72 percent this year to 65 percent before springing back to nearly 72 percent in 2025.

A key difference in the studies is the estimates of how much new business the convention center expansion and the two Hiltons, backed by the hospitality giant’s considerable sales-and-marketing firepower, would generate.

Gahl said constructing the two Hiltons and the convention center expansion would allow the Indiana Convention Center to host two large conventions at the same time, something it currently is unable to do. He said that, over the last decade, Visit Indy lost out on 208 conventions because it lacked sufficient available convention or hotel space.

“This project will transform Indianapolis and grow the convention business,” Gahl said.

He said Visit Indy, the not-for-profit charged with bringing conventions to the city and helping fill convention hotels, wouldn’t argue for the project unless officials were confident it would succeed.

“We have the greatest to lose,” he said. “At the end of the day, it is our group charged with filling it up.”•