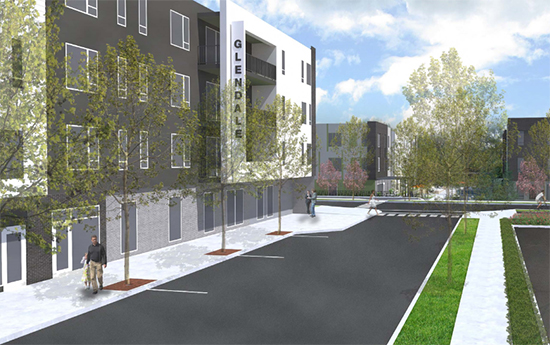 A pair of local developers with plans for an extensive apartment complex in Glendale Town Center said Tuesday they hope to break ground on the project before the year’s end.

Glendale owner Kite Realty Group Trust and Milhaus, both based in Indianapolis, held a public information session Tuesday night at the vacant former Macy’s store at the mall to share more about their plans for a seven-building, 267-unit complex along Rural Street in parking areas for the mall. (Click on image below for larger view of a conceptual site plan.) The project is part of a larger effort by Kite to breathe new life into the shopping center at 6101 N. Keystone Ave.

The developers said they were equal partners in the project, although company representatives told a group of nearly 40 nearby residents the development does not yet have a firm price tag. It's also unclear whether developers would seek public financial help, such as tax-increment financing, with representatives saying that "may be an option." 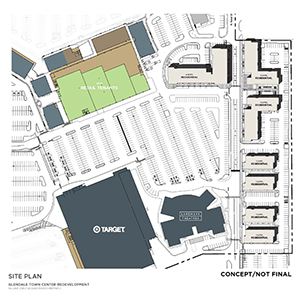 The development team is expected to meet with city officials about the project Friday and could have the plans heard by the Metropolitan Development Commission as early as July 17.

Brad Vogelsmeier, director of development for Milhaus, said the group hopes to begin construction on the project by autumn. The expected construction period for the project would be about two years, he said.

The project architect is DKGR, while Anderson + Bohlander is the landscape architect. Both firms are based in Indianapolis.

IBJ previously reported the project is expected to be heard by the Board of Zoning Appeals to change the zoning from classification C4, which allows for shopping mall development, to D-P, a planned unit development district. No date has yet been set for that request, according to filings on the city website.

“We are excited for the future of Glendale Town Center, and look forward to partnering with Milhaus and the Glendale community to strengthen a neighborhood landmark with the proposed redevelopment,” Mark Jenkins, senior vice president of development for Kite, said in a written statement.

The 5.7-acre project site is comprised of existing parking lots, including a 4.2-acre overflow lot on the east side of Rural Street that is subject to a land covenant. The developers are expected to ask the MDC for termination of the 1969 agreement, which currently prevents the site from being developed.

The covenant was enacted before Kite owned the property, when Glendale was converted from an open-air mall into an enclosed shopping center. It gives property owners near the lot a say in changes to the site plan. It also allows for legal action if the covenant is breached.

Much of Rural Street between Kessler Boulevard to 62nd Street is expected to undergo extensive improvements, including the addition of sidewalks and landscaping. The redevelopment of that section also could include a change to the IndyGo bus stop, now near Landmark's Glendale 12 Theatre.

The apartment project has faced concerns from residents in the nearby neighborhoods, particularly those living along Oxford Street, the nearest road to the east. Several residents voiced concerns to the developers on Tuesday related to privacy, noise, lighting and traffic problems that could stem from the complex.

Representatives of Kite and Milhaus said they would take into consideration the feedback they received, and pledged to continue working with residents to address their concerns with additional public meetings and input sessions.

In addition to the apartment development, Kite is also looking for ways to find new retail tenants for the former Macy’s store, which was vacated early this year. The 237,456-square-foot, three-level department store took up about 45 percent of the square footage in the 530,249-square-foot shopping center.

Kite said it would initially concentrate efforts on renovating the second floor, which technically is street level on the south side of the store that faces Target. Preliminary plans call for the creation of up to four separate retail spaces on the floor, occupying a total of 53,000 square feet. Kite representatives said they plan to give each tenant its own exterior entrance.

Kite representatives said they are “close” to reaching agreements with some national tenants for some of the space, but declined to disclose the companies. Kite said it hopes to have the stores open to the public by the 2020 holiday season.

There are no immediate plans to redevelop the rest of the space, officials said.