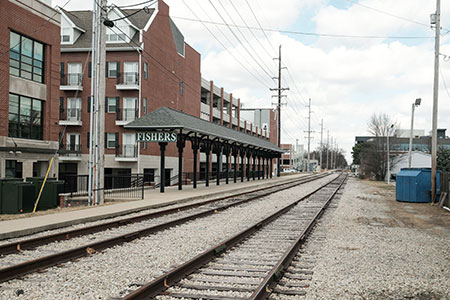 Indianapolis has joined Fishers and Noblesville in a quest to turn the Nickel Plate Railroad corridor into a 17-mile trail connecting the three communities and is seeking millions in state funds to make it happen.

In fact, all three cities have applied for funding from the Indiana Department of Natural Resources Next Level Trails Fund to help convert the railroad into a pathway from East 39th Street in Indianapolis to Pleasant Street in Noblesville.

Fishers and Noblesville, who, together with Hamilton County, own 37 miles of the corridor from the Marion County line to Tipton, have spent the past 2-1/2 years making plans for the trail and are seeking grants to speed up the project.

But Indianapolis is just getting started—and city leaders say they need the grant money if the trail is to become a reality in Marion County at all. Already, they have neighborhood groups along the route on their side. 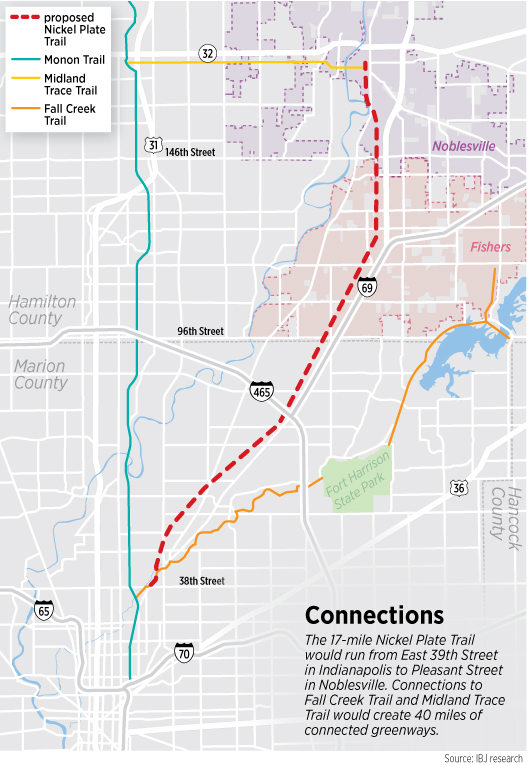 See how the proposed Nickel Plate Trail would create 40 miles of connected greenways.

The Binford Redevelopment Association Group, which represents about 35,000 residents in northeast Indianapolis, was one of the first to endorse the project. In a letter of support for the grant application, Executive Director Mark Flanary said the community would benefit from the connections with existing trails—including the Monon and Fall Creek Greenway as well as trails on 62nd and 71st streets and at Skiles Test park and Fort Benjamin Harrison.

“We believe that continuing the Fishers Nickel Plate Trail south of 96th Street into Indianapolis is an ideal way to provide this connectivity, not only to the Indianapolis trail system but to our neighbors in Hamilton County as well,” Flanary said.

Next Level Trails is part of Gov. Eric Holcomb’s $1 billion Next Level Connections infrastructure program, which also aims to accelerate completion of major highway projects, expand access to rural broadband services, and create more nonstop flights to and from Indiana. The initiative will be the largest infusion of trails funding in state history.

Indianapolis, Noblesville and Fishers applied for funding in separate but coordinated applications that provide new insight into the communities’ plans. Together, the cities are eyeing $11.5 million in regional funding—roughly one-third of the $31 million estimated cost for design and construction.

“We can create a new corridor that once again connects the central Indiana region in new ways with the promise of a positive economic impact for its communities,” Fishers Mayor Scott Fadness wrote in his city’s application. “We can create a one-of-its-kind 40-mile pedestrian loop and inspire discovery and wellness for all who visit, every day of the year.”

While the Nickel Plate projects were passed over for the first round of funding, which granted $25 million to 17 projects last month, leaders remain hopeful their applications will be competitive in subsequent rounds. Applications for the second round of funding will be accepted later this year, according to the Indiana Department of Natural Resources. Projects not chosen in the first round are invited to resubmit their applications with updated timelines.

Fadness said city leaders plan to discuss with the DNR why their projects weren’t chosen in the first round to better understand what criteria the applications didn’t meet.

In the meantime, Fishers is charging ahead with plans to rip out the railroad tracks and begin construction this fall on the already-funded portion of its trail—from East 106th Street to East 126th Street.

Indianapolis and Noblesville, however, are waiting to see whether they can secure grant funding before moving forward.

The city of Indianapolis only recently considered converting the Nickel Plate Railroad into a trail.

Originally, the corridor was tagged for the IndyGo Green Line, to provide bus-rapid or light-rail transit from downtown Indianapolis to Noblesville as part of the Indy Connect Transit Plan. When that plan was rejected, city leaders began looking at the corridor differently.

Last August, Indianapolis submitted a letter to the Federal Surface Transportation Board, which oversees the country’s railroads, indicating its support for the Fishers and Noblesville projects and expressing interest in its own. At the time, city leaders said those conversations were preliminary and any project would first need to be supported by residents.

Now, the Nickel Plate Trail is part of the Indy Moves Plan adopted at the end of last year. Through the public meeting process to adopt that plan, city leaders learned the idea of a trail had “overwhelming” support from neighborhoods that surround the corridor, said Indianapolis Department of Public Works Director Dan Parker.

“When you look at the ability to connect the Monon downtown with the state fairgrounds with Castleton and the Binford redevelopment area all the way out to Fishers … that could be a really transformative project for the northeast side of Indianapolis,” Parker said.

Indianapolis is interested in joining the trail effort, but the city doesn’t have funds in its cash-strapped budget to pay for the project, said Parker, who estimated the Indianapolis portion would cost $10 million.

Much of the public works budget goes to road projects, and funding allocated for trails is already going toward other trail projects, he said, so the city needs grant funding from Next Level Trails to make the Nickel Plate connection happen.

The city has requested $3.5 million to help with design, construction and inspection costs to build the first phase, which would run for roughly 5.2 miles from East 62nd Street north to East 96th Street. Communities are required to provide a local match of at least 20%. Indianapolis has agreed to pony up $1.9 million.

Eventually, the city would seek funding to pay for the second phase: the 3.4 miles that run from the Indiana State Fairgrounds at East 39th Street to East 62nd Street.

Parker said the Nickel Plate Trail would complement the Monon Trail, which already connects to the west side of the fairgrounds and runs through Carmel up to Westfield. It would also connect to Indy’s Fall Creek Trail. 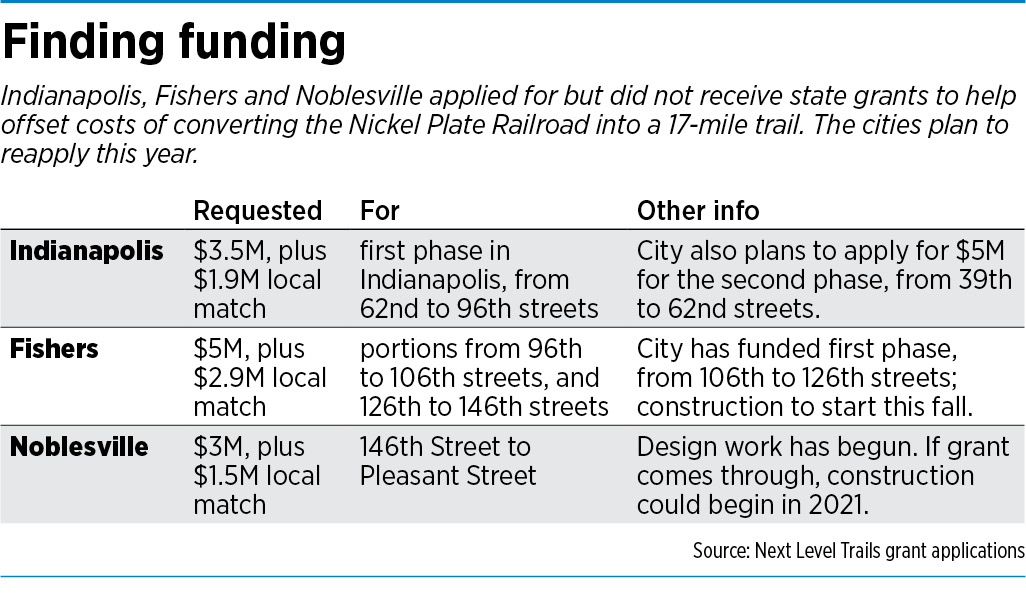 Once fully built, the Nickel Plate Trail would connect to the Monon and the Midland Trace Trail in Noblesville, creating a 40-mile pedestrian loop from the fairgrounds in Indianapolis north to Forest Park in Noblesville.

In its application, the city of Indianapolis argues that support for the trail is contagious. In addition to the Binford neighborhood group, the project is also supported by the Greater Allisonville Community Council, Eastwood Neighborhood, the Ivy Hills Residents’ Association and the Fairfields-Sylvan Neighborhood Association, as well as the Indy Chamber and the Indiana State Fairgrounds.

Noblesville is also waiting to secure grant funding before making any official plans for the trail that was announced in February 2017, city spokesman Robert Herrington said.

Noblesville asked for $3 million in grant funding to supplement a $1.5 million local contribution (which includes land) to construct the trail from East 146th Street to Pleasant Street. It plans to resubmit its application. That funding would enable Noblesville to begin working on the trail in 2021, according to the application, much sooner than if the city has to fund the entire project itself.

The Next Level Trails funding is the first grant the city has applied for to build the Nickel Plate. Unlike Fishers, the trail hasn’t been a top priority for Noblesville officials, which have been dedicating resources to completing the Midland Trace Trail and the Levee Trail.

But now that those projects are fully funded and under construction, Noblesville Deputy Mayor Steve Cooke said, it’s time to explore other funding opportunities for the Nickel Plate Trail.

The city is ready to begin preliminary design work and is laying the groundwork for future community input if the funding is awarded, according to its grant application.

Cooke said the grant funding would allow Noblesville to begin work on the Nickel Plate without depleting funds from infrastructure projects slated to be completed in the next few years as part of the city’s capital improvement plan, which doesn’t include the trail.

“We felt like this was an opportunity to build the trail without taking funds away from other priorities and to bring this connectivity to thousands of residents who don’t have that connectivity today,” he said.

For now, the trail’s fate through Noblesville depends on that grant funding. Current Mayor John Ditslear’s term expires this year, and Chris Jensen—the Republican nominee for the post, who is expected to win easily—has said the trail won’t be a priority for him.

In Fishers, however, the city isn’t relying on state funding to complete roughly four miles of trail that will run from East 96th Street to East 146th Street. Fadness said the grant money could help speed up construction, but the trail will be fully built eventually with or without that money. “We believe enough in this project that we’re going to continue to move it forward,” he said.

For the two construction phases the city has not yet funded, 96th to 106th streets and 126th to 146th streets, Fishers requested $5 million in grant money and agreed to provide a local match of nearly $2.9 million.

The $8.8 million it funded through a property tax hike for the middle, 106th-to-126th-streets leg includes an underground tunnel at 116th Street.•