Indiana startups might soon have an easier time attracting out-of-state investments thanks to a change lawmakers made this year to an instrumental tax incentive program. 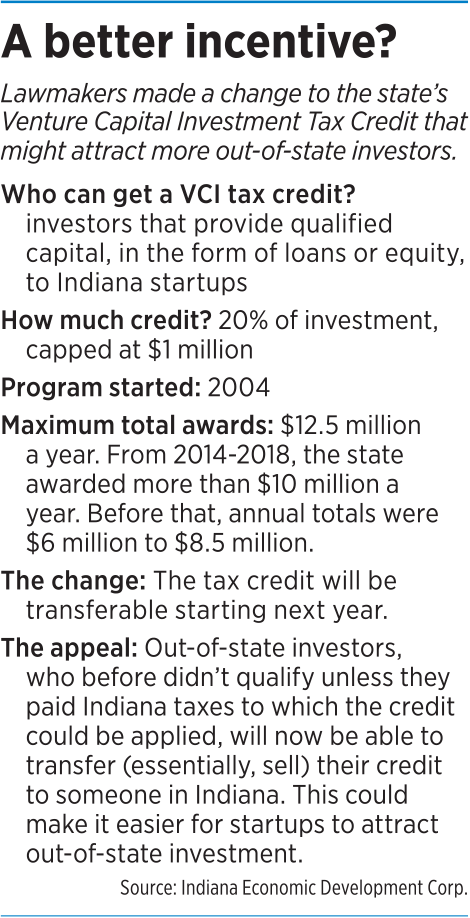 The state has offered the venture capital investment tax credit since late 2003 as a way to make investing in startups a little less risky, but it really only benefited Indiana residents because it applied to an individual’s state tax liability. That meant investors who didn’t pay Indiana taxes were left out.

Senate Bill 563, authored by Republican Sen. Travis Holdman and signed by Gov. Eric Holcomb, changed that. Starting in 2020, investors will be allowed to transfer the tax credit, which means out-of-state investors can essentially sell the credit to someone in state who can take advantage of it.

Leaders in the tech community say that is a big win for their industry, because it will help motivate out-of-state individuals—who regularly ask about the tax credit—to invest in Indiana startups.

“It’s certainly not the only driver when making the decision about whether to invest in a company,” said entrepreneur Mike Simmons, who is now executive chairman and president of Sharpen Technologies. “But it certainly makes it a much easier decision.”

The change could also have a ripple effect for regular in-state investors. If startups’ pool of potential investors grows, local investors might hear fewer pitches.

“There are 15-20 people that probably get hit on pretty regularly for investment,” Simmons said. “The more we can broaden that out, it’s definitely better for the community.”

The VCI tax credit program allows someone who invests in an early-stage Indiana company to claim a tax credit worth 20% of the investment. The credit is capped at $1 million.

Eligible startups have to register with the Indiana Economic Development Corp. and set a venture capital fundraising goal. Investors then can receive the 20% credit until the company hits that goal, which is capped at $5 million.

In the program’s first 15 years, 778 startups have been certified to use it, but only 39 have reached the $5 million cap.

Scott McCorkle, who used the credit as part of his strategy to attract investors to his software-as-a-service firm MetaCX Inc., said the program definitely helps.

“It makes for more aggressive investments, so a higher level of funding,” McCorkle said.

Investors have five years from making the financial commitment to claim the tax credit.

The IEDC is limited to awarding $12.5 million in tax credits every year—but the total credits have never reached the cap.

“Only in the last few years has that [cap] become a concern,” IEDC President Elaine Bedel said.

Mike Langellier, president and CEO of TechPoint, said the credit has been “a really important instrument in the startup finance ecosystem” because it can be difficult to convince investors to take a risk on an idea or new company.

The companies involved in the program are typically in their first round of funding, and investments could take a long time to materialize. The credit essentially makes the investment 20% less of a risk.

“What’s so great about it is, it provides virtually an immediate return on investment,” Simmons said.

It’s not clear how much money Indiana startups have missed out on because the tax credit wasn’t transferable, but tech leaders say they know dollars have gone elsewhere.

“It’s real. I absolutely see it,” Langellier said. Investors “have tons of options to prospectively invest in. A big part of that decision is the risk/reward trade-off.”

Simmons said allowing the credit to be transferable will “definitely broaden the investor base.”

Some states, like Kentucky, already allow the VCI tax credit to be transferred to another individual. But the move by lawmakers this year does give Indiana a leg up over Illinois, Michigan and Ohio, where the credit is not transferable.

“It just gives us a bigger platform to tell the story of all the great things that are happening in the state of Indiana startup scene,” said Scott Dorsey, tech entrepreneur and investor who helped found venture studio High Alpha.

The IEDC is still working out the details of just how the transfers—or most likely sales—of tax credits will work. The state will not be involved in determining how much an in-state investor will pay to buy a tax credit from an out-of-state investor, but the parties will have to notify the IEDC.

Bedel said the price might depend on whether the buyer could immediately claim the tax credit or would be saving it for a year in which he or she has a high enough tax burden to apply it.

“I see it as a real win-win for the state of Indiana,” Bedel said. “We’re just bringing more money in to help start these small businesses in Indiana.”

Langellier said he thinks there is a large pool of potential investors among out-of-state alumni of Indiana’s colleges and universities since they already have a connection to the state.

John Hanak, managing director of Purdue Ventures, said its donor network is predominantly alumni, so the impact from the change could be huge.

“There’s definitely been a market need for this to happen,” Hanak said. “It’s just another in a number of growing factors for investors to look at Indiana.”

Langellier also said the tool could convince startups to locate in Indiana, because access to capital is typically a top consideration for entrepreneurs.

But the measure’s significance, he added, will depend on key details like how easy the process is to use the credit and how well the startup community markets it.

“We shouldn’t see it as a ‘build it and they will come’ kind of strategy,” Langellier said. “It’s not going to happen to be successful on its own.”

One unchanged aspect of the program is the cap on how much the IEDC can award each year. That will stay at $12.5 million, but tech community leaders are likely to push the state to increase it if the credits start reaching that level.

Bedel said hitting the maximum would be a good thing.

“That would mean we have more money coming in from outside the state,” she said.•