Home » Companies are giving employees more say in how, when they volunteer

Companies long have encouraged employees to volunteer and be active in their communities.

But often that meant sponsoring a specific volunteer day or having a designated not-for-profit for employees to help. Now, businesses are giving employees more freedom and flexibility when it comes to volunteering programs—and they’re going far beyond one organized annual volunteer day.

Some companies, such as Fishers-based First Internet Bank, have implemented unlimited paid time off for volunteering. While others, including Carmel-based accounting firm Katz Sapper & Miller, are giving monetary incentives when their employees hit a certain number of volunteer hours.

According to the Society for Human Resource Management, 24% of companies allow their employees to take paid time off to volunteer.

Experts in corporate social responsibility, or CSR, say such programs are at least in part driven by millennials in the workforce and are almost necessary today to attract and maintain top talent. Questions about volunteer opportunities regularly come up in job interviews, and employees increasingly want the ability to select a not-for-profit or cause they are passionate about, rather than be told where they can or cannot volunteer during company time.

According to a report from the Indiana University Lilly Family School of Philanthropy, 60% of employees say the ability to choose which organization or cause to support is “extremely valuable” in their decision to give time or money.

“Many companies see this as part of their overall strategy rather than something just on the side,” said Una Osili, associate dean for research at the Lilly Family School of Philanthropy. “The flexibility has become more and more important rather than a kind of one-size-fits-all model.”

Employers say flexible volunteer programs are a win-win-win—they can boost morale among staff members, serve as a strong recruitment tool and help improve the community.

Nicole Lorch, executive vice president and chief operating officer for First Internet Bank, said it’s important for employees to bring their best selves to work, which means allowing them to connect to causes they care about.

“If we can help support that through time or money, we’re glad to do that,” Lorch said.

‘Right thing to do’

Mike Wipper, who has worked at KSM for nearly two years, said he was shocked when he heard the company would donate $500 to a not-for-profit after an employee clocked 24 hours of volunteer time with the group.

“I’ve worked for two national accounting firms, and no one had a program anywhere near that,” Wipper said. “A $500 contribution is not something to sneeze at.” 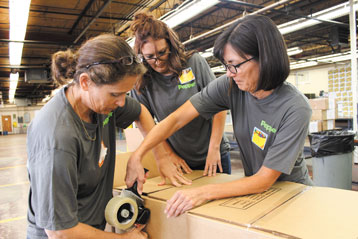 KSM launched the initiative, dubbed “Time and Talent,” in the fall, and it’s already had an impact. Of KSM’s 350 employees, 24 hit the threshold for the $500 contribution before the end of last year.

“To have that happen that quickly really shows me that we did strike a chord,” KSM Managing Partner David Resnick said.

Resnick said KSM already had a matching-gift program, but leaders wanted to create something to support employees who would rather volunteer time than give money. KSM staff have volunteered for a variety of charities, from religious organizations to animal rescues to health care groups. Wipper, for example, volunteers with Friends of Indianapolis Dogs Outside and serves on the not-for-profit’s board.

“We just want to err on the side of the individual,” Resnick said. “We’re allowing them to go where they wish.”

Josh Driver, CEO and founder of Selfless.ly, said that if companies want to create the best kind of volunteer program, employees need to be able to volunteer wherever they’d like. That’s because everyone might not be interested in planting trees or packing bags of food, for example, but they might be interested in helping a not-for-profit fix its website.

“If you’re looking to increase the engagement … you need to be more inclusive,” Driver said.

His company aims to help others with their corporate social responsibility strategies, recognizing that some businesses might not have a human resources department or staff members with enough resources to manage programs like these.

“If I’ve got 75 different employees running 75 different directions, that’s a nightmare,” Driver said. “But if you’re trying to create a CSR program and do it right, it has to be done like this.”

Netlogx, an Indianapolis-based risk-management services company, has for the past four years given its employees eight hours every year to volunteer at any not-for-profit. Last year, the company had about 80% participation, and this year, it’s aiming for 90%.

Audrey Taylor, CEO and founder of Netlogx, said the program is a way to show employees the company cares about them and the community.

“It’s kind of the right thing to do,” Taylor said.

It’s not just the private sector offering the benefit to employees. The state of Indiana allows its 28,000 employees to take 7-½ hours—a full work day for the state—off every year for volunteering.

State employees also can participate annually in what’s known as the State Employee Community Campaign, which is a months-long initiative in which departments and agencies create and manage fundraising activities for a not-for-profit they select.

“It’s an incredible employee-engagement experience,” said State Personnel Department Director Britni Saunders. “Any organization that wants to light a fire in their employees in some way, I think charitable work is a great way to do that.”

Pepper Construction Co. of Indiana President Mike McCann recently decided to give employees 12 hours of paid time off for either a company-sponsored community event or to volunteer wherever they’d like. 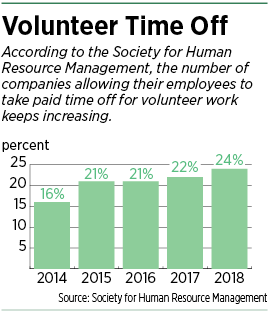 He knows some people may see that as a productivity killer.

“I think it’s just the opposite,” McCann said. “I think it improves our employee morale.”

With turnover costs far outweighing the cost of paid-time off for an employee to volunteer, and low unemployment rates giving individuals more job opportunities, business leaders are increasingly concerned about keeping employees happy in the workplace.

According to the Tennessee-based Work Institute, one-third of employees are expected to voluntarily leave their jobs by 2020, and turnover could cost companies $680 billion by 2020.

Driver said Selfless.ly estimates its program saves the more than 60 companies it works with an average of $20,000 per year in turnover and management costs.

“I think people are becoming more cognizant of the power CSR can have,” Driver said.

It’s also becoming a key recruitment tool. According to a report from the IU School of Philanthropy, 79% of millennials look for companies that care about how they are impacting and contributing to society, and 64% say they would turn down a job offer if the employer didn’t have a strong CSR policy.

Deana Applegate, Pepper’s director of human resources for Indiana, said she’s regularly asked by prospective employees about how the company gives back.

“They want to know how we’re involved,” Applegate said. “They’re passionate about getting involved in the community.”

Driver has suggestions for companies creating CSR plans. For starters, he advises against offering unlimited paid time off for volunteering and recommends going beyond a single day of organized work.

Driver said the problem with unlimited time off for volunteering is that there’s no goal to work toward, so it might not motivate employees.

“I like the principle of unlimited, but I also like the idea of structuring something that’s feasible,” Driver said. “Sometimes people need a goal.”

Lorch, from First Internet Bank, said the company offers unlimited volunteer time because it didn’t want to make its policy complicated, and leaders weren’t concerned about their employees abusing it.

“We lean on the side of keeping things simple when we can,” Lorch said.

As for the dedicated one-day volunteer events, Driver said those can certainly have an impact. But the long run, the impact for the not-for-profit is much greater when employees have ongoing relationships with organizations and volunteer regularly.

Osili said the key for not-for-profits involved with those one-time volunteer days is to find a way to turn the experience into a long-term relationship with the not-for-profit and the company’s staff.

“I think for some nonprofits they can leverage those one-time moments to expose employees to long-term opportunities,” Osili said.•