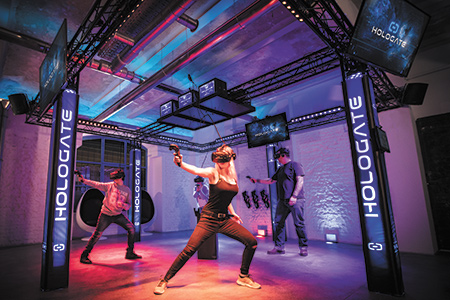 Creative Works Inc. is a small company with a big presence in the world of fun.

Established in 1997, the company designs, makes and installs set pieces and props for a host of entertainment venues, including escape rooms, virtual reality and esports venues and indoor miniature golf courses.

The company creates about 300 projects a year, delivering them to customers all over the United States and abroad. And it’s in a serious growth mode.

“We’ve tripled in size the last three years,” said Armando Lanuti, the company’s president and co-owner. The other co-owners are founder Jeff Schilling and his wife, Kim.

In 2016, the company had 25 employees and just under $7 million in annual revenue. Today, Creative Works has more than 70 employees, and its 2018 revenue was $20 million. The company expects to grow both its revenue and workforce by 20% to 40% this year, Lanuti said.

One reason for Creative Works’ growth: In an age where more and more of life happens online, consumers want a memorable occasion when they do go out. 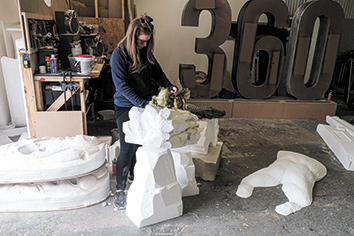 “Consumers as a whole are looking for experiences, and they’re looking for more of an emotional and physical connection than they would have in the past,” said Kim Donahue, a senior lecturer in marketing at Indiana University’s Kelley School of Business at IUPUI. “The whole way you can compete [as a venue] is by the experience that you can create.”

And that’s what Creative Works does.

“People go to a venue for one of two reasons—to celebrate or escape something,” Lanuti said. “It’s giving them that emotional R&R, so to speak.”

Creative Works makes actual objects: recreations of famous Chicago landmarks for a miniature golf course; an intricate steampunk-themed set for a laser tag venue; or a simulated Egyptian archeological site for an escape room where customers can solve hands-on puzzles with lights and moving parts. 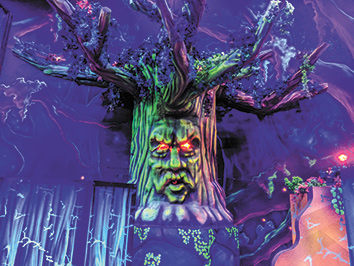 But what the company is really selling is less tangible.

“The product is the emotions and the memories that we create,” Lanuti said.

But creating the sets that evoke such emotions doesn’t come cheap.

Depending on the size and complexity of the project, Creative Works charges from $40,000 to several hundred thousand dollars for its work.

And the nature of the industry demands that venues keep their offerings novel if they want to succeed.

“You’re always trying to add something new every year,” said Creative Works customer Brent Greenwood. “You always want your customers to come back.”

Greenwood and his wife, Mary, own Funopolis Family Fun Center in Commerce, Georgia. The couple hired Creative Works to create a Star Wars-themed laser tag arena when they opened Funopolis in 2008. The venue also offers go-karts, a climbing wall, miniature golf and other attractions. It added an escape room in 2017, purchasing Creative Works’ Egypt-themed set pieces and puzzles. 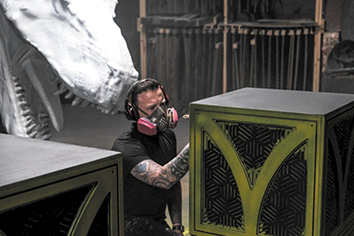 Creative Works has taken steps to improve its culture for its employees. (IBJ photo/Eric Learned)

“Every year, they’re always trying to introduce something new, which is great for the industry,” Brent Greenwood said.

Another reason for the company’s growth—and a factor that distinguishes it from competitors—is that Creative Works offers a broad array of products.

Jeff Schilling started the company fresh out of Butler University, where he’d completed an internship at a local laser tag venue. For its first 10 years or so, most of Creative Works’ customers were laser tag facilities.

“That led us to a lot of other doors that opened for us,” Schilling said, and the company started doing more work for other types of venues.

The company got into escape rooms and virtual reality venues over the past few years, as those forms of entertainment began to grow in popularity. Just this year, Creative Works started doing work in esports—creating the fixtures and set pieces for competitive-video-gaming venues.

“We are comfortable being uncomfortable in learning new things,” Lanuti said.

Looking ahead, Creative Works is eyeing casinos and resorts as potential new areas of opportunity.

Funopolis’ Greenwood said he’s aware of only one or two other companies that offer the range of products and services that Creative Works does. 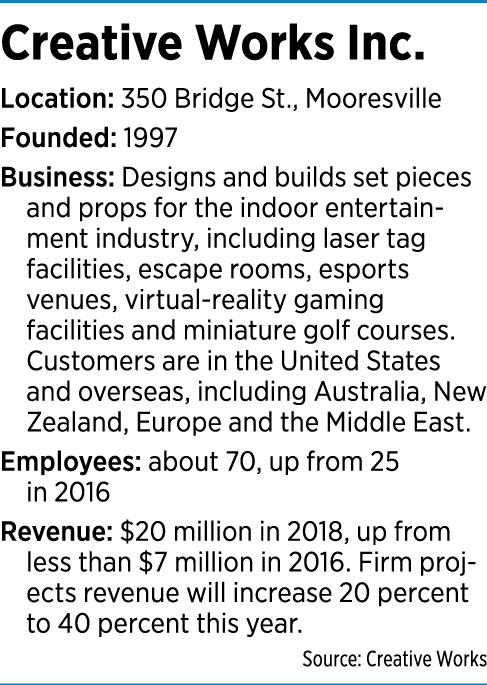 Creative Works’ recent growth can also be attributed to some internal factors.

Several years ago, Jeff Schilling said, he came to the realization that he needed to step back from being so involved in day-to-day operations. “I needed to have my team really grow and let their strengths shine.”

He invited Lanuti, who had been at the company since 2008, to buy in as an owner.

“Three to five years ago, we had a high turnover and our culture wasn’t as good,” Lanuti said. “For us to grow, we had to create an attractive offering for people to want to come down here and work with us.”

So the company improved its benefits package, adding paid maternity leave and beefing up its 401(k) benefits. It started a program that distributes a portion of the company’s profit back to employees. It established quarterly companywide meetings to celebrate successes, recognize top performers and trouble-shoot challenges. It began organizing employee volunteer activities and social outings.

“We got our employees to really become team members,” Jeff Schilling said.

The efforts seem to have paid off, Lanuti said. Turnover is way down, and the company’s employees come not just from Morgan County but also from as far away as Hamilton County.

In recent years, many new companies have popped up around the world to offer potential competition for Creative Works.

But Brent Greenwood of Funopolis said he’s loyal to Creative Works because of its quality work and strong customer service. “Through the years, we’ve built a relationship with them and really trust them in terms of the quality of their products.”

Ideally, Brent Greenwood said, he’d like to add even more Creative Works pieces to Funopolis. “I wish I could get a few more, but it hasn’t been in the budget.”•