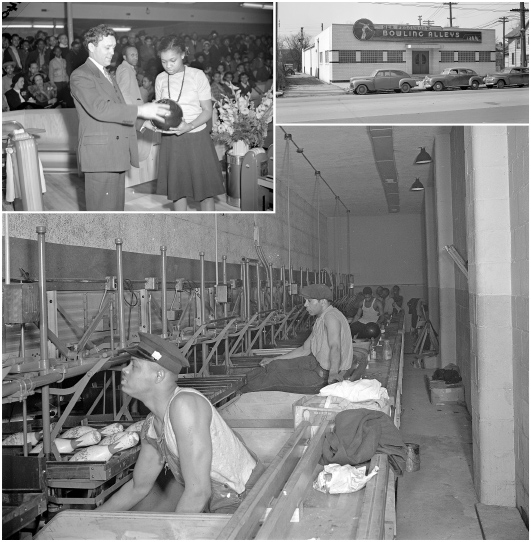 Sea Ferguson was born in Kentucky and followed his brother, Denver, who came to Indianapolis in 1919 and opened a printing company. In about 1931, the brothers began building an entertainment district on Indiana Avenue, with businesses including the Trianon Ballroom, Cotton Club and Sunset Terrace Ballroom, and they opened the Ferguson Hotel. They launched a booking agency and brought African American performers to the city. Sea, who was an officer with The National Negro Bowling Association, built Sea Ferguson’s Bowling Alleys in 1941 at 750 N. West St. He was believed to be only the third African American to build a bowling center. The bowling alley was chosen to be the site of the National Colored Bowling Tournament in 1942. These photos were taken March 19, 1942, in advance of the tournament and include men working as pin setters behind the alleys.•

These photos are courtesy of the Indiana Historical Society and are part of the Larry Foster Collection. More images are available at images.indianahistory.org.