Home » How socially responsible are your investment funds?

Investing with an eye toward social responsibility has become a hot trend in recent years, but right now there’s no easy way for investors to actually assess how well a fund’s stated goals play out in its actual investment practices.

That could soon change. The U.S. Securities and Exchange Commission has proposed a rule that would, for the first time, require funds and advisers to disclose information about how environmental, social and corporate-governance issues, commonly known as ESG, factor into their investment products and services.

“It’s really hard for the public to really discern what is ESG and what is just regular, straight-up investing,” said Matt Landini, principal at Indianapolis-based Genuine Wealth Advisors LLC.

The concept, sometimes also called socially responsible investing, has been around for decades. It originally focused on avoiding investing in businesses that some perceive as having negative social effects, such as alcohol, tobacco, weapons, gambling or fossil fuels.

The concept has expanded in recent years to include environment-focused funds and has caught on in a big way among U.S. investors. According to the Chicago-based investment research firm Morningstar Inc., as of last year, U.S. investors had 534 ESG funds to choose from, up from 392 in 2020 and just 104 in 2012.

The funds’ approaches vary widely. One environmentally focused fund, for instance, might be heavily weighted toward renewable-energy producers. Another fund might focus on companies committed to supporting reforestation. Both might hold themselves out as ESG investments.

“[ESG] is still a pretty broad term that isn’t very well defined,” said John Shelbourne, a financial adviser at Indianapolis-based investment firm Woodley Farra Manion Portfolio Management. “There are ESG funds out there that still have [oil company] Chevron in them.”

And, in some cases, so-called ESG funds can be similar to funds that don’t use the ESG label.

Landini said his firm doesn’t offer a lot of investment options that are labeled ESG, even though he has clients with an interest in ESG investing. That, he said, is because the ESG funds typically carry higher fees than non-ESG funds, even when the asset mix between the two funds might be nearly identical.

“First and foremost, we’re supposed to be fiduciaries and act in the client’s best interest,” Landini said. 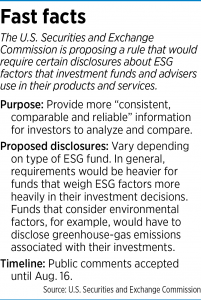 The SEC proposed the new rule in May, and it’s accepting public comments on the topic until Aug. 16. As proposed, the rule would mandate varying levels of disclosure, depending on the type of ESG fund.

ESG-focused funds, in which ESG factors are a major consideration, would be required to provide more detailed disclosures, including an ESG strategy overview.

And ESG-focused funds that use greenhouse gas emissions as a decision factor would be required to disclose the carbon footprint of their portfolio.

These disclosures would become part of investment documents, including fund prospectuses, annual reports and adviser brochures. 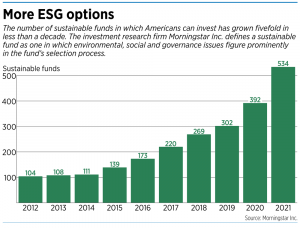 Shelbourne said Woodley Farra Manion doesn’t market itself as an ESG investment firm, nor does it offer ESG funds to its clients. But the firm does field a lot of ESG-related questions from clients who want to avoid investing in certain industries—like defense, gambling, or oil and gas.

The new rule should make it easier to answer some of those questions, Shelbourne said. “We very much try to make things understandable to our clients, so they can easily understand what we’re doing and why we’re doing it.”

Jasmin Sethi, associate director of policy research at Chicago-based investment research firm Morningstar Inc., said her
firm generally favors the SEC proposal, though it plans to submit comments to the
SEC with suggestions for refinements.

In November 2020, Morningstar formally began integrating ESG factors into its analyses. But it can be difficult to determine which funds are truly ESG-focused and which might be just using the term as a buzzword to attract interest, Sethi said.

“It’s not that easy to quantify,” Sethi said. “An ordinary investor might not be able to distinguish.”

The SEC’s proposal, she said, could also cut down on the practice of so-called greenwashing, where an entity promotes a pro-environmental stance or activities, but doesn’t actually follow through with them.

Sethi said Morningstar believes a certain level of greenwashing exists, but at present it’s impossible to say how widespread the practice is.

As of mid-July, the public docket for the proposed ESG rule included 50 comments submitted by individuals, companies and organizations. Those comments represented a mix of opinions both for and against the proposed rule. Those against the proposal offered reasons that ranged from a fear of stifling the free market, to a belief that the SEC should not involve itself in climate matters, to outright denial that climate change poses a problem.

The proposed rule is among a number of steps the SEC has taken recently that are related to climate disclosures.

In March 2021, the SEC formed a Climate and ESG Task Force to analyze disclosure and compliance issues related to advisers’ and funds’ ESG strategies.

Two months ago, BNY Mellon Investment Adviser Inc. agreed to pay a $1.5 million penalty to the SEC to settle allegations that the company had misstated the extent to which ESG considerations factored into investment decisions for certain mutual funds.

And in a separate proposed rule that gained widespread attention earlier this year, the SEC is pushing to require publicly held companies to disclose their direct and indirect greenhouse gas emissions and the climate risks their businesses face. That rule was introduced in March and is still making its way through the regulatory process.•

2 thoughts on “How socially responsible are your investment funds?”