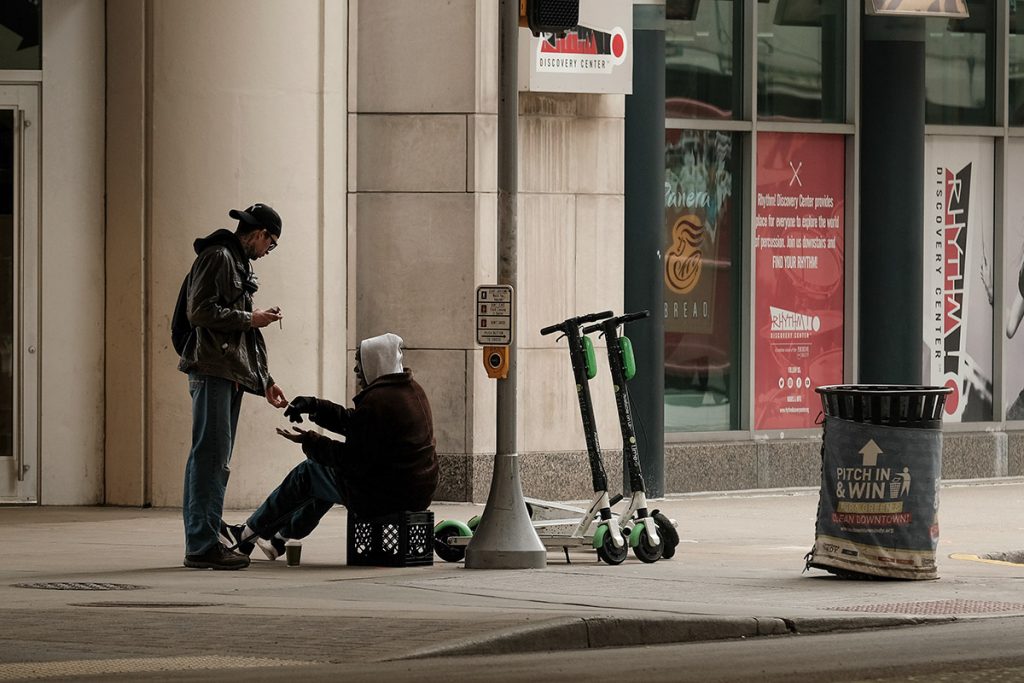 Advocates of the legislation say homelessness and panhandling are different, but its critics say the two problems are intertwined. (IBJ photo/Eric Learned)

The American Civil Liberties Union of Indiana has filed a lawsuit challenging the constitutionality of the state’s new law defining panhandling—a move that has been expected since the legislation was introduced earlier this year.

The law, which the Indiana General Assembly passed in March and Gov. Eric Holcomb then signed, expands the definition of panhandling in a way that effectively bans begging for money throughout all of downtown Indianapolis.

Advocates for the legislation have argued that panhandling is out of control in downtown and action was needed to stem the problem. They have pointed to an ordinance in San Antonio to justify measure’s constitutionality.

But opponents, including the ACLU of Indiana, have argued that court decisions made after the San Antonio ordinance took effect have declared panhandling laws like this unconstitutional.

The ACLU filed the lawsuit Thursday in the U.S. District Court Southern District of Indiana against the superintendent of Indiana State Police, Indianapolis Mayor Joe Hogsett and Marion County Prosecutor Ryan Mears. The lawsuit argues that the law violates the First Amendment because it limits free speech.

“Because of the broad definition of financial transaction, the expansion of the places near where panhandling is prohibited, and the increase of the distance restriction to 50 feet, HEA 1022 leaves virtually no sidewalks in downtown Indianapolis or any downtown area in any Indiana city where people can engage in this activity which courts have recognized is protected by the First Amendment,” Ken Falk, legal director at the ACLU of Indiana, said in a prepared statement.

The ACLU the law would even prohibit its staff members and volunteers from soliciting donations for the organization while handing out copies of the constitution, which it regularly does on Constitution Day on Sept. 17.

“But we know what this law truly aims to do is even worse,” Jane Henegar, executive director at the ACLU of Indiana, said in a statement. “It is sometimes difficult to confront the face of poverty. But we must assist those who suffer the consequences of America’s income inequality and failed mental health system, not sweep them out of sight.”

The law is set to take effect July 1, but the ACLU has requested a preliminary injunction in its lawsuit to prevent that from occurring.

Hogsett’s office declined to comment on the lawsuit. Holcomb’s office did not immediately respond to a request for comment.

5 thoughts on “ACLU of Indiana sues to stop panhandling law”