Home » After Indiana teachers fought for better pay, coronavirus could mean cutbacks instead 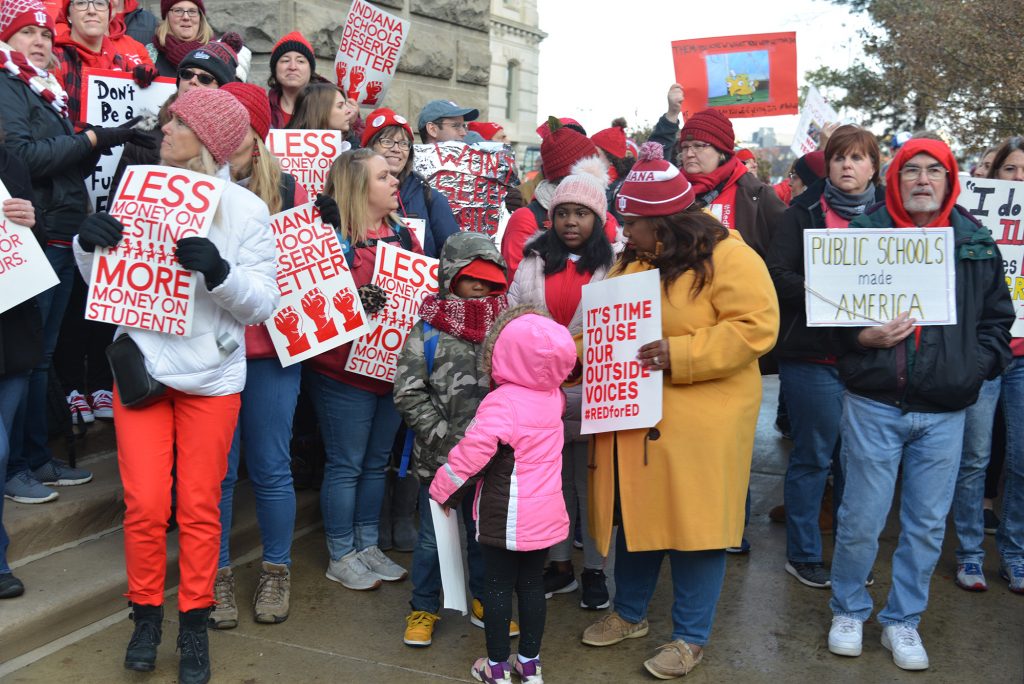 Indiana’s teacher unions planned to use April to gear up for the primary election. Riding the momentum from a massive Statehouse rally months earlier, they were going to push members to get to the polls and continue demands for better pay.

Instead, the coronavirus has postponed the primary and created uncertainty as teachers are scrambling to educate their students remotely. The most pressing education issue in Indiana quickly shifted from increasing teacher salaries to mitigating how much progress students will lose with school buildings shut down through the end of the academic year.

Within weeks, educators went from well-poised to argue for more funding in a state with seemingly plentiful reserves to facing a likely recession and much steeper competition for diminished state dollars. Experts say Indiana’s schools are left particularly vulnerable, which creates the potential for future budget cuts and layoffs.

Indiana’s revenue has already started to decline after the coronavirus closed a long list of non-essential businesses and prompted an ongoing stay-at-home order. The state has started dipping into its $2 billion reserves, which experts say could quickly be depleted if taxes continue to come up millions short each month.

Schools won’t immediately feel the financial impact. State officials have repeatedly said they will continue with the 2020 budget, with no plans to suddenly change education funding. But if the revenue drop is as steep as experts are predicting, it will be difficult to avoid cutting education funding when the state sets its next two-year budget in 2021.

“I don’t think any part of the [state] budget can expect to emerge unscathed by this,” said Chris Watts, president of the Indiana Fiscal Policy Institute, a not-for-profit governmental research organization.

School funding in Indiana largely comes from state sales and income tax, Nelson said. Most other states rely more on property taxes, she said, which are slower to change in a recession.

In a controversial move more than a decade ago, the state capped property taxes to offer relief to property owners and took over the majority of the responsibility for funding the districts’ budgets from state revenue. Lawmakers said having the state dole out school money would create more equitable funding statewide. But some worried about the long-term impact on the district budgets and questioned the reliance on a less stable tax source.

Sales and income tax revenue depends entirely on how much people spend and how many people are employed — two factors that change quickly when the economy downturns.

“In situations like right now, where people aren’t buying anything and a huge share of our tax base is unemployed, we aren’t going to generate income and sales taxes,” Nelson said.

The same year the caps went into effect, the new system was put to the test as the state felt the effects of the 2008 housing market crash. Schools took a huge financial hit. Then-Gov. Mitch Daniels cut $300 million from education on the last day of the year to address a $1.8 billion deficit, saying it was necessary because education made up more than half of the state budget. As district funds dried up, thousands of teachers were laid off.

Now experts are projecting the financial fallout from the coronavirus to be much steeper than in 2009. Unemployment fillings are pouring in at a much faster rate, state officials said. The state missed its March forecast by $70 million, officials said Monday, but is still ahead of its forecast for the year. State officials said April revenues will give them a better idea of what financial losses the state will face.

By the end of the calendar year, if Indiana’s revenue continues to decline at its current rate, the state’s loss will match the drop in 2009, Watts said — this time happening months faster.

And with the added strain on the health system caused by the pandemic, schools could be put on the backburner for funding while the state prioritizes health. Medicaid costs, for example, are expected to increase, Watts said.

“I think we are going to have to have a serious discussion in the state about the funding source for education and is the current system too vulnerable to ups and downs to the state’s economics,” said Keith Gambill, president of the Indiana State Teachers Association.

Gambill said the state’s largest union will continue its Red For Ed movement, which for now includes monitoring the long-term impact and potential economic recovery time. He declined to talk about financial hypotheticals or projections.

“We‘re going to have to recognize that our future depends on the education of our children,” Gambill said, “And that is what has been the primary focus of Red For Ed and will continue to be our focus.”

Earlier this year, lawmakers kicked conversations about increasing teacher pay to next year, when the state’s next two-year budget will be set. The state’s Republican supermajority rejected a series of Democrat proposals that would have allocated more money this year.

But lawmakers did approve other demands from teachers, including making optional an externship previously required to earn a teaching license and decoupling test scores from teacher evaluations.

And, prior to the state’s first coronavirus case, Gov. Eric Holcomb promised to free up an additional $50 million to put toward teacher pay in 2021 by tapping into its more than $2 billion in reserves to pay down the state’s teacher retirement fund. He also formed a Teacher Pay Commission tasked with finding other ways to increase salaries.

Commission chairman Mike Smith said the group is still finishing its report and will release the findings “as soon as is practical and useful.” Holcomb previously said the report would be completed this spring.

Some of the recommendations may change as a result of the coronavirus and its impact, Smith said. He declined to say what ideas the commission is considering, but said some are “economically durable” and still make sense.

“I’m thinking carefully about these recommendations in this new context,” Smith said. “We have lots of things to think about in these circumstances.”

One thought on “After Indiana teachers fought for better pay, coronavirus could mean cutbacks instead”