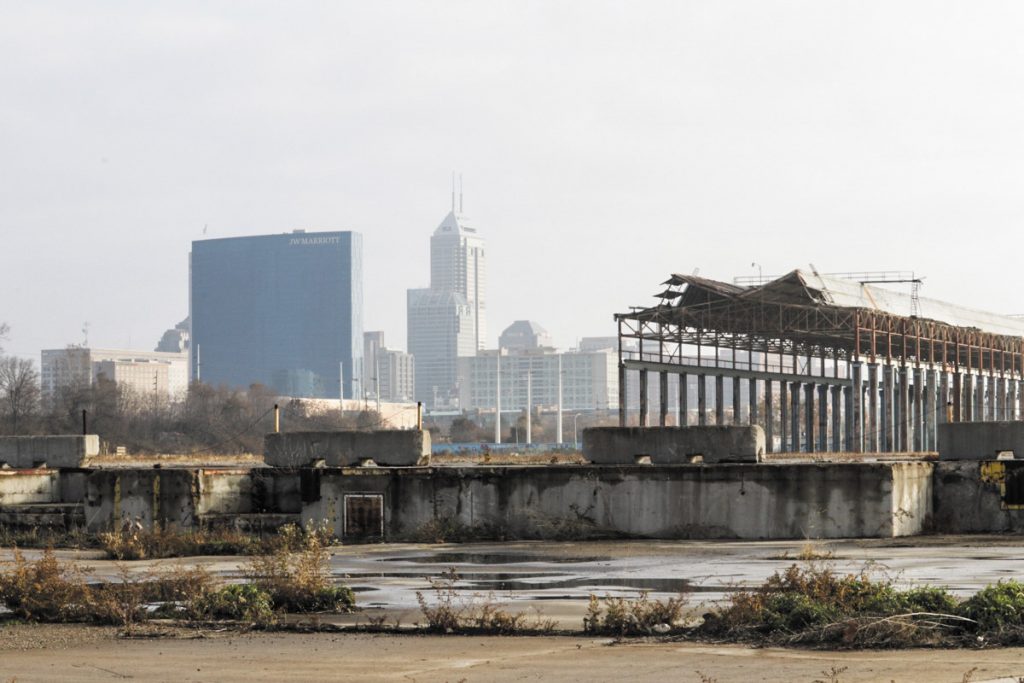 Editor’s note: The original version of this story appearing in print listed the wrong sale price for the 12 acres purchased by the Indianapolis Zoo.

The fight between Ambrose Property Group and the city over the company’s stalled redevelopment of the former GM stamping plant could take years to play out in court—delaying any development at the site on the west edge of downtown.

And negotiations could be difficult, given that both sides have strong arguments, legal experts say.

Mayor Joe Hogsett’s administration’s threat to use eminent domain to buy 91 acres from Ambrose is deeply rooted in property law that gives governments authority to take land for the public good.

But allegations Ambrose has levied in a lawsuit filed Nov. 19 raise questions about whether the city acted in good faith, which could give the developer a compelling case.

Among the claims is that the city is violating a February 2018 project agreement, which includes a clause preventing eminent domain from being used on the property.

The lawsuit only heightens the tensions that became public when the city sent an Oct. 2 letter saying it planned to acquire the property either through negotiations with the firm or through eminent domain. Ambrose had said five days before that it was canceling plans for its $1.4 billion redevelopment, known as Waterside, and hoped to find another developer to take on the project.

The lawsuit also alleges the city tried to take the site from Ambrose once before, for another project—and that the current effort is intended to benefit another developer.

“On the face of the complaint … it looks like [Ambrose has] a substantial claim,” said Jim Bopp Jr., a constitutional lawyer with the Terre Haute-based Bopp Law Firm.

Ambrose says the city’s eminent domain threat amounts to fraud and breach of contract—a tactic Bopp said could work, since the firm is asking the court to view the project agreement as a business contract. Doing so would limit the city’s ability to assert eminent domain authority at-will, as is generally permitted under Indiana law.

“The city has unfortunately put us in a really bad situation,” Ambrose co-founder Aasif Bade told IBJ on Nov. 4. “I think, as of right now, I only see the courts as the [sole] potential solution to resolve the situation.”

Cynthia Baker, a clinical law professor at the Indiana University McKinney School of Law, said the strength of the breach of contract argument will depend on how the court interprets the agreement.

“The city could say, ‘Well, we assumed that you knew we could use eminent domain because it’s a sovereign authority.’”

Ambrose insisted the clause be added to the project agreement after the city threatened in 2017 to take 55 acres of the land by eminent domain for the development of a training center for tech giant Infosys.

Ambrose, the neighborhood and other parties pushed back on that, ultimately leading Infosys to select a site near Indianapolis International Airport for its venture.

Tom Malapit, an attorney with Muncie-based McKinney & Malapit, said that history could make all the difference for Ambrose when the case is heard by a court.

“The reason why Ambrose would [add that provision] is so they could continue their development without the fear,” Malapit said. “You don’t want that fear looming over your head when you’re investing millions of dollars to develop a piece of property.”

“That’s why I think the contract really is going to benefit Ambrose,” he said.

Baker, who reviewed the Waterside project agreement, the lawsuit and copies of the letters and public statements exchanged between the city and Ambrose throughout October, said the matter could still be resolved through negotiation—however unlikely.

“It’s probably better for both of them to go to the negotiation table and figure out, you know, if there’s a breach of contract and what the damages are to each side,” she said. “Maybe they’re negotiating right now.”

Too high a price

The parties have attempted negotiations. Ambrose and city officials met Oct. 23 at the developer’s Monument Circle headquarters. Ambrose officials say the city offered $6 million for the site, which the developer rejected.

Since then, the company has said it has invested millions in the site and its development plans—although little appears to have changed on the ground. And Ambrose sold 12 acres to the Indianapolis Zoo for $3 million.

Bade has said he has appraisals that value the remaining 91 acres at $65 million to $100 million. He would not release those documents.

Generally, cities acquiring land through eminent domain are required to pay fair market value for the property, as determined by at least two independent appraisers and a judge.

Ryan Groves, a partner at McKinney & Malapit, said pricing the stamping plant site will likely prove difficult because of its size and proposed development.

“Normally, the fights around eminent domain are about the amount of money you get paid for the property,” Groves said. “In this sense, it’s probably going to mean whatever the commercial value of the property is, which would be quite significant.”

The city has not publicly acknowledged that it made an offer nor indicated how it plans to fund a takeover of the property if its eminent domain bid is successful.

Bade said the city needs to up the ante.

He said Ambrose received an unsolicited offer of $650,000 per acre earlier this year—about $67 million. But Bade said he turned it down because the company still planned to carry out the Waterside project. The company declined several requests from IBJ to share documentation of that offer.

He said the city’s announcement that it planned to take the land decimated the site’s market value, because no other developer would want to become entangled in the legal fight between the municipality and Ambrose.

Sever said if the city had communicated its plans to Ambrose quietly, the eminent domain threat likely would not have dampened market demand for the site.

”But [the city] put it out there and made it public,” Sever said. “So what happens to the marketplace? It goes away—there’s no marketplace for the real estate anymore and the property [value] falls to zero.”

Ambrose was actively advertising the site through JLL and said it had received interest in the property before the city’s threat. That interest dried up once the city made it clear it wanted the site, Bade has said.

“I think they have a good case for inverse condemnation,” Sever told IBJ.

Observers are split over whether the city violated Indiana law if it planned to give or sell the site to Indy Eleven and Keystone Corp. owner Ersal Ozdemir, as alleged in the Ambrose complaint. Ozdemir has proposed a $550 mixed-use project called Eleven Park but has not identified a location.

Generally, governments can’t claim eminent domain only to turn around and provide the property to another developer. Rather, the site must be used for public purposes.

Some experts said the city could make a case for public purpose, because Ozdemir’s plans for the site include a plaza and a 20,000-seat soccer stadium that would be owned by the Capital Improvement Board, which also owns Lucas Oil Stadium, Bankers Life Fieldhouse and other major downtown facilities.

“I think the city would prevail in that case, because the soccer stadium would [constitute] a public purpose and qualify” under eminent domain statutes, Malapit said.

Indy Eleven has refuted Ambrose’s claims that it is negotiating a deal for the site with the city, and has said the property is not even under consideration for Eleven Park.

Ambrose as part of its Nov. 19 filing requested an injunction to halt city efforts to take the land until the case is decided. As of press time, the city had not started formal eminent domain proceedings and had not indicated whether it plans to do so.

Observers said the court might also order the sides to attempt mediation before beginning a lengthy court battle.

“I wouldn’t be shocked if this lasted at least two years before a final resolution is reached,” said Malapit, added that the injunction alone is likely to head for an appeal—whichever way the ruling goes.

But it’s also likely an initial ruling on that request will come within 60 days.

“I don’t know what the court’s calendar is like, but these kinds of matters take precedence over other matters,” he said.

Groves said the process is likely to be drawn out and expensive.

“Between two entities like this, if they’re willing to spend millions of dollars or at least hundreds of thousands of dollars, this could easily run two, three years—not including appeals,” he said.

“I think that if the three or four people involved in that decision could dial that one back … they would,” he said. “They’ve set the city up for what will probably be a costly defensive exercise.”

Shreve, who said he and other members of the City-County Council were not involved in the decision to threaten eminent domain, called the move a mistake and said the litigation will have “a chilling effect on the city’s posture going forward.”

IU’s Baker said the dispute will likely lead developers to think the city can’t be trusted on big projects.

She said the maneuver might “damage the city’s ability to be a part of a public-private partnership, which is really required for this particular property.” But she said others might view the city’s effort as avoiding “caving under progressively aggressive demands for more and more public assets when it needs to be a partnership.”

Ambrose has said one reason it decided not to pursue the project is because the city declined to commit to additional incentives when the developer expanded the project.

Baker said bringing the parties back to the table, particularly given each side’s perception that the other reneged on their deal, will be difficult—if not impossible.

“There was a loss of trust at some point in the fall of 2019 that brought this—for now—to a screeching halt,” she said. “I think everyone loses.”

Jay Napoleon, president of The Valley Neighborhood Association, said his concern is about the impact litigation could have on moving any development at the site forward, and the potential stigma lawsuits might create at the site.

The Valley’s boundaries include the stamping plant site.

“Ultimately, [going to court is] not a great thing for either party,” Napoleon said. “As far as we’re concerned, that’s the last thing we want to see.”

Napoleon said he has had limited contact with officials on either side, but that the neighborhood is open to helping “work this out.”

“We will try our best to mediate any potential solution here,” he said. “Because we have to live with the consequences of this one way or the other.”•