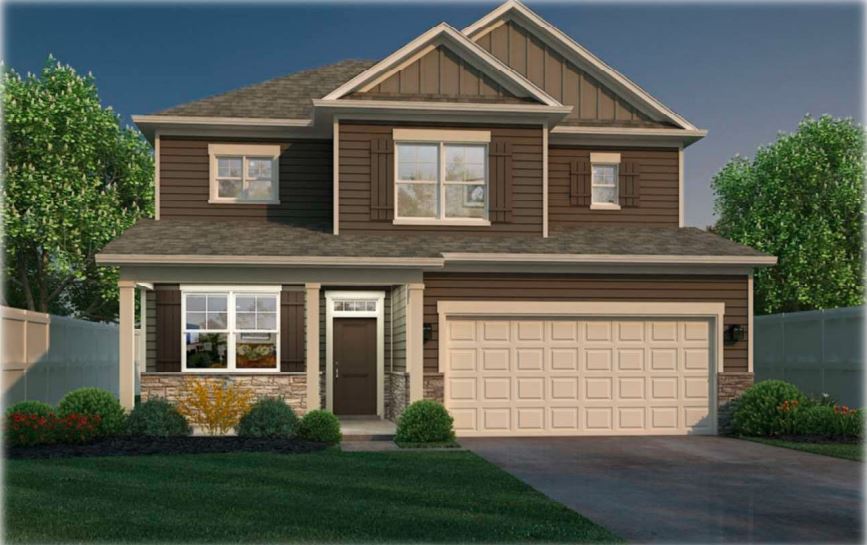 AMH Development LLC is planning two rental home communities in Noblesville that would include up to 168 new houses. (Rendering courtesy AMH Development)

Ohio-based AMH Development LLC on Tuesday night presented initial proposals to the Noblesville City Council for two rental-home communities that would total up to 168 new houses.

The Promise Run development would have 147 single-family houses on 52 acres on the west side of Pleasant Run near East 196th Street, according to documents filed with the city. The unincorporated land would need to be annexed into the city.

A smaller development on the southwest side of Noblesville called Maple Grove would have 21 single-family homes on 8.79 acres. The project would be on the northeast side of the East 161st Street and Hazel Dell Road roundabout.

Matt Price, an attorney with Indianapolis-based Dentons Bingham Greenebaum, told the council that houses in both developments—whose designs would be named after former U.S. presidents John Adams, James Buchanan, Dwight Eisenhower and William Howard Taft—would range from 1,800 to 2,700 square feet.

The houses would include stainless steel appliances, luxury vinyl plank flooring, finished garages and granite countertops. Promise Run would also feature a community center with a swimming pool and playground.

If approved, AMH expects to spend about $45 million on Promise Run and $7 million on Maple Grove.

City Councilors Brian Ayer and Mark Boise both expressed concerns about adding more housing in Noblesville given the number of developments that are either approved or currently going through the process.

“We’ve got a lot of growing pain to go through,” Ayer said. “My concern is our infrastructure and actually just absorbing what we’ve already approved.”

He added that people who rent from AMH typically are relocating for a new job, empty-nesters or are not in the market to purchase a home. The company offers minimum one-year leases and most tenants stay three to five years, Price said.