After three chaotic months during which bureaucratic delays and a lack of communication left millions of business owners wondering when help would arrive, the federal government’s coronavirus disaster-loan program is gaining momentum.

The Small Business Administration had approved just over 1.1 million coronavirus disaster loans as of Saturday, according a recent SBA report, up from about 39,000 in late April. It has spent $80 billion out of about $365 billion in available loan funds. 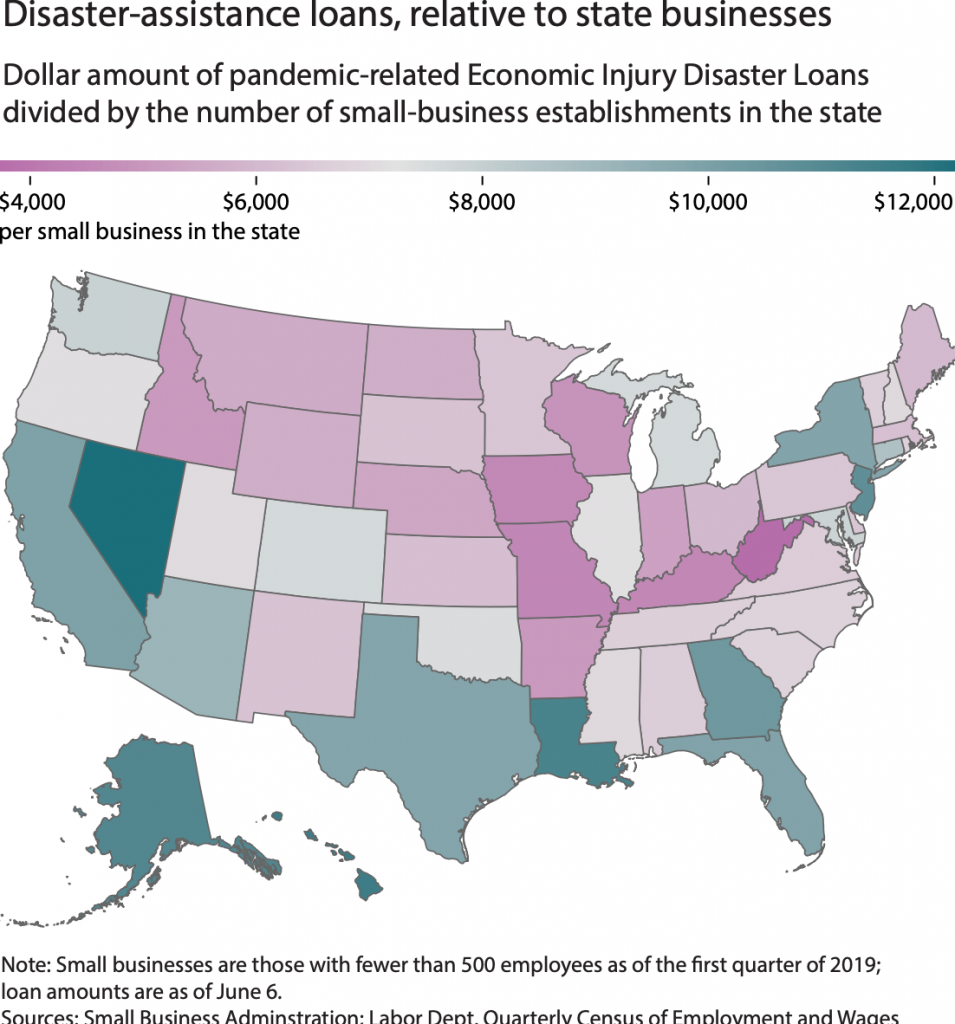 But the agency still has a long way to go toward addressing the more than 5 million disaster-loan applications it received as the economic crisis set in. And questions linger about whether the loan funds—which are part of a separate program from the larger Paycheck Protection Program—are being distributed fairly and effectively.

A state-by-state Washington Post analysis of SBA spending found drastic variation in loan receipts, highlighting how the current effort to bolster the economy with federal funds could contribute to stark inequalities in how wealth is distributed across the United States.

The Post’s analysis is based on loan figures published Saturday by the SBA. The figures were then adjusted based on the number of small businesses in the state. Because not all small business applied for an Economic Injury Disaster Loans program, known as EIDL, loan (about half did, according to a survey from the National Federation for Independent Business) the average size of each loan is likely to be larger than depicted above.

When adjusted for the size of its small-business community, West Virginia did worse than every other state, for example. Small businesses in West Virginia received 2,781 EIDL loans for a total of $178 million.

In response to questions from The Post, Sen. Joe Manchin, D-W.V., expressed frustration that businesses in his state had received such relatively little funding.

“It is clear there is something very wrong with the distribution of these funds,” Manchin wrote in a statement. “I will demand the SBA provide an explanation for this unacceptable difference and urge them to correct the unequal distribution of the EIDL funds. West Virginia businesses are struggling to stay afloat during this healthcare crisis and deserve to be supported at the same level as other small businesses across the nation.”

The SBA has refused to release records showing which businesses received federal coronavirus assistance, even though such information has been released on the agency’s website in the past. The Post is among 11 news organizations suing SBA for access to the data.

The EIDL program is different from the $660 billion Paycheck Protection Program that is part of the Cares Act. The EIDL loans are handled directly by the government rather than private lenders, making them more appropriate for entrepreneurs who don’t have deep banking-industry connections. They are favored by many business owners because more of the funding can be spent on bills including rent and utilities.

But the program did not address the crisis as quickly as members of Congress and federal officials had hoped. The SBA’s Office of Disaster Assistance received an unprecedented crush of applications in mid-March when the economic crisis deepened, and it did not have the infrastructure in place to process so many applications in a timely manner.

The agency received several million loan applications within a few days, SBA officials have said. A person familiar with the matter who was not authorized to discuss the issue said the total amount of loans received eventually climbed to between 5 million and 6 million applications before the SBA closed its application portal in late April.

The SBA initially said it would be able to process most loans in three weeks, but it took six weeks to approve the first 39,000 EIDL loans, amounting to less than 1% of its total application backlog.

And some business owners are finding the loans too small to be of much help. To try to avoid running out of funding, the SBA slashed the size of its EIDL loans to $150,000 per application, a drop in the bucket for all but the smallest companies.

Early on in the process, the SBA attempted to solve the problem by outsourcing much of its loan evaluation work to Rocket Loans. The Rocket Loans work is being handled through an existing contract with a Herndon, Virginia-based company called RER Solutions, worth at least $350 million, to manage loan recommendations and analysis, according to contract documents.

Over the past few months, the SBA has hired new loan reviewers, largely through contractors, according to people involved in the process who were not authorized to discuss the issue publicly. And the agency has changed its processes in ways that have sped up loan approvals while decreasing the size of loans and grants that businesses receive, according to SBA officials and people familiar with the matter.

The first 1.1 million EIDL loans have been allocated in a widely divergent manner from one state to the next, according to the figures released Saturday by the SBA.

Businesses in California led the way in EIDL loan receipts, with $15.1 billion going to 196,365 businesses. Texas and Florida received $6.7 billion and $6.9 billion, respectively. New York, with the biggest coronavirus outbreak in the country, received just over $6 billion in EIDL loans.

Several states with smaller economies managed to nab an outsize share of small business aid through the EIDL program. When adjusted for the number of small businesses operating in the state, Nevada, Hawaii and Louisiana received the most help by far. Nevada received about $12,200 per small business, about twice as much as a typical state.

Midwestern and Intermountain West states that depend heavily on agribusiness fared poorly in the EIDL program’s first three months, possibly because farms were initially excluded. Among 12 states that received less than $6,000 per small business, seven were agriculture-heavy states, including Missouri, Iowa and Nebraska.