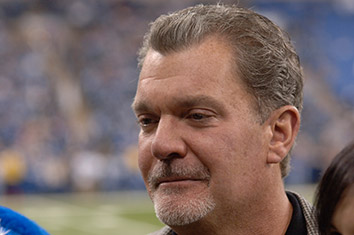 His antics this week—over the past three weeks, actually—suggest an owner hellbent on tanking for the highest possible draft pick next spring, and landing as many verbal haymakers as possible to the coaching and analytics community in the process.

That, at least, is the determination made by some NFL general managers, executives and player agents this week, many of whom reached out to me before I could even solicit their thoughts on the Colts’ owner. Irsay’s decision to fire head coach Frank Reich—a man with a winning record (40-33-1) despite perpetual mismanagement of the quarterback position by the front office and a new opening day starter all five years on the job —and replace him with former center Jeff Saturday—who has no coaching experience above high school (even those results were spotty) and no real ambition to coach in the NFL (by his own admission)—was bizarre, stupefying and largely without precedent.

Irsay’s rambling attempts to justify his apparent surrender of the 2022 season during a misguided news conference Monday night, in which he had the nerve to opine about this hire possibly following in the footsteps of Don Shula or Tony Dungy, further poisoned a locker room and coaching staff already seething at the ridiculous turn of events. The second half of the Colts’ season now seems to many around the league more an obtuse sociological experiment than an attempt to win football games, considering this unusual string of events.

Irsay had already mandated in Week 8 that developmental quarterback Sam Ehlinger, the 218th pick in 2021, replace borderline future Hall of Famer Matt Ryan. He oversaw the firing of offensive coordinator Marcus Brady days later, a power play some in the league believe is fueled by a lust for the first overall selection, which netted Irsay generational talents Peyton Manning and Andrew Luck in the past. (Numerous individuals who discussed the matter with members of the Colts staff and roster and who spoke on the condition of anonymity to discuss the sensitive topic indicated that Irsay was behind these moves.)

The Colts, who are now 3-5-1 and have lost three straight games, also traded their best remaining running back, Nyheim Hines, to the Buffalo Bills at the deadline before shutting down injured star Jonathan Taylor, leaving them without a run or pass game.

“Frank never wanted to change QBs and if he was forced to do it and it was up to him, he would have gone to [veteran Nick] Foles,” said a longtime confidant of Reich’s who spoke on the condition of anonymity because he was not authorized to reveal their private conversation. Reich “knew Ehlinger wasn’t ready to play. He would never fire Marcus Brady like that. Frank doesn’t fire anyone. That’s not how he operates. This is all Irsay. Frank will take the high road, and he won’t say anything about it. But that’s how it went down.”

One NFL general manager with ties to several key members of the Colts staff said in the immediate aftermath of Reich’s firing Monday—but before Saturday had been named the replacement—that the moves were “all premeditated. The owner is already on to next year. It’s already about next year. He’s tanking for a QB. It was obvious when he benched a $30 million guy for a guy who can’t play. That’s what this is about.”

Contacted again after Saturday was plucked from ESPN to take over this fractured football team, that general manager said: “I told you, he is doing whatever he can not to win.” (Irsay has rejected the accusation, telling the Athletic “That’s the most absurd thing I’ve ever heard, that we’re tanking,” and repeatedly calling it “bulls—.”)

Irsay thumped his chest during the Monday news conference, crowing that Saturday having no NFL experience means he’s not going to kowtow to analytics (“he doesn’t have that fear”), which leads Irsay to believe “the guy is a winner.” And all of it appeared to flout the spirit of the NFL’s diversity initiatives.

“He’s making a mockery of the Rooney Rule,” another GM said of Irsay. “He’s using a loophole to bring in his handpicked guy, who isn’t qualified for the job, and give him an eight-game trial. And if he likes him, he can just keep him around for good.”

Irsay has previously forced a coach (Chuck Pagano) and a GM (Ryan Grigson)—who each wanted the other fired—to stick together for another lost season. He has bragged that he would like to win at least two Super Bowls with Luck, who appeared in none. And despite having Manning and Hall of Fame GM Bill Polian for the totality of the Hall of Famer’s healthy prime, he held the Lombardi Trophy just once. So consider it foreboding that Irsay couldn’t help but gush about Saturday possibly lasting much longer than eight games on an interim tag—at a time the newcomer had barely met all his staff.

In anointing Saturday, Irsay skipped over two former NFL head coaches on this staff—Gus Bradley and John Fox—and a special teams coach, Bubba Ventrone, who oversaw the team during COVID issues in the past and is seen a potential future head coach. They came to Indianapolis to work for Reich, who was beloved, and now report to Saturday, who revealed a certain level of hubris in even accepting this position under these circumstances. That dynamic almost begs conflict.

Ryan and other veteran players were irate when informed of the decision by General Manager Chris Ballard, who told them this came directly from the owner, according to multiple individuals who discussed this with Colts players but were not authorized the speak for them. Several players said privately that they did not want to play there anymore; Irsay waited until after the trade deadline to pull this trick.

Not surprisingly, Saturday had great difficulty finding anyone willing to take over as offensive coordinator and call plays Sunday against the Las Vegas Raiders. His top pick, quarterbacks coach Scott Milanovich (like Reich, a former University of Maryland star), turned it down, according to individuals with knowledge of the situation. The newbie finally settled on another novice to give it a shot: Parks Frazier, 30, the Colts’ assistant quarterbacks coach, who has no history running an offense.

“I’ve talked to coaches there, and they are all like, ‘What the f— just happened?” said an individual who has worked with members of the Colts staff and remains in close contact with them but who spoke on the condition of anonymity when discussing private conversations. Irsay “had three guys he could have promoted who could have done the job and he hires a guy off his couch from ESPN? Trust me, inside that building they know this is an absolute waterfall of s—. The coaches and players know this is a total tank job. That’s what they’re all talking about.”

The idea that those coaches and players will now go out of their way to help bail out Saturday—and, by extension, Irsay—struck many as counterintuitive given all that has gone down. Irsay’s repeated shots at coaches also left many on Reich’s staff dismayed. Reich himself bailed Irsay out after top choice Josh McDaniels abruptly returned to New England shortly after agreeing to become the Colts head coach in 2018, and Irsay had bestowed five-year extensions on Reich and Ballard in 2021.

“Jeff has a huge problem with that staff already,” said one longtime agent who has discussed the matter with Colts payers and coaches. “The owner just threw that staff completely under the bus. He could have helped Jeff if he handled it the right way, but Irsay completely butchered this. Everything he said was a smack in the face to the coaching profession in many ways. His comments were atrocious to the coaching fraternity, and now Jeff is supposed to be their boss. I don’t see how that’s supposed to work.”

Neither does anyone else. Except perhaps it will work perfectly—in that it will fail miserably. And apparently anything goes for the chance to draft the right quarterback.

Jason La Canfora has covered the National Football League and its franchises for nearly 20 years for The Washington Post, NFL Network and CBS Sports.