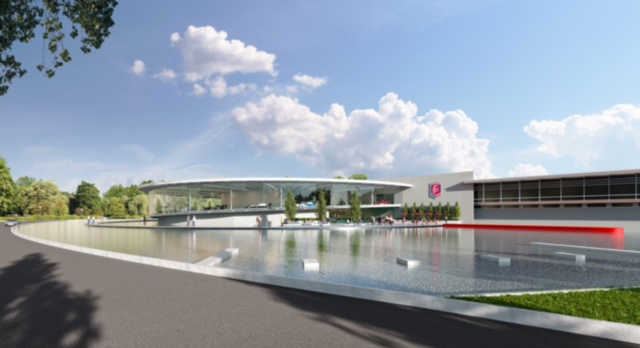 A 575,000-square-foot facility will serve as the base of operations for Andretti Global's many racing programs. (Image courtesy of the city of Fishers)

Both teams said the goal is to move into Andretti Global’s planned 575,000-square-foot headquarters in Fishers, due to be operational in 2025.

In partnering with Brownsburg-based Taylor, Andretti will have a presence at the top level of American sports car racing. It comes ahead of next month’s Rolex 24 at Daytona, which will launch a new era as IMSA will use hybrid engines in its rebranded Le Mans Daytona Hybrid, or LMDh, top class.

“This is an exciting time for us,” Andretti said. “Re-entering IMSA full time, and at this level, has been a goal of mine. I wanted it to be the right opportunity and at the right time–and we’ve found that.”

Andretti, owner of a four-car team in IndyCar, is also trying to land a spot to field two cars in Formula One.

The move to hybrid technology has lured new manufacturers to the series, and teams are eager to participate in the sport-changing moment.

For 2023, Andretti will remain in IMSA’s Le Mans Prototype 3, or LMP3, category with Jarett Andretti. Andretti Autosport competes in six additional series worldwide, including IndyCar where the team has won the Indianapolis 500 five times.

“It’s an honor to be partnering with a name like Andretti as we enter a new era of racing,” Taylor said. “While our 2023 program won’t look much different, there is a lot that Andretti Autosport can offer to us as we continue to build and expand.”