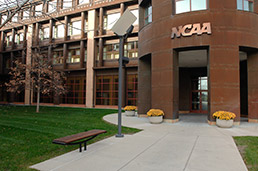 An organization calling for reform in college sports has filed a complaint with the U.S Justice Department against the NCAA, accusing those involved with the governing body of violating antitrust laws by capping compensation to athletes.

The National College Players Association, or NCPA, is asking the agency to pursue civil and criminal charges against individuals who share responsibility in maintaining athlete compensation restrictions.

“NCAA sports is a predatory economic cartel that denies college athletes the freedom to use their gifts and talents to earn money without restrictions. A freedom afforded to other Americans,” National College Players Association Executive Director Ramogi Huma said Friday.

Huma, a former UCLA football player, and the NCPA have been leading the charge for college football and basketball players to receive a share of the millions of dollars in revenue their sports generate for more than a decade. The NCPA was part of a failed attempt to unionize football players at Northwestern. Huma has testified in front of Congress numerous times.

A complaint does not ensure an inquiry by the department, but college sports and the NCAA remain under legal and political pressure to lift its ban on paying athletes.

“It’s another avenue to attack to the NCAA,” Gabe Feldman, director of sports law at Tulane, said of the complaint to the DOJ.

Huma cited last year’s 9-0 Supreme Court ruling against the NCAA in the Alston case for paving away for further legal action, including Justice Brett Kavanuagh’s scathing concurring opinion in which he wrote “there are serious questions whether the NCAA’s remaining compensation rules can pass muster.”

The NCAA said Friday it has not received the complaint and declined to offer specific comment.

“However, Mr. Huma in the past has been wrong on the facts and law as he has spoken about college athletics,” the NCAA said.

The NCAA lifted its ban on athletes earning money for endorsement and sponsorship deals last year, which allows third parties to compensate them.

Lacking detailed and uniform rules to regulate those name, image and likeness payments, college sports leaders have asked Congress for help in the form of a federal law, but there has been little progress in Washington.

“There’s no industry that so visibly, loudly, and deliberately flaunts its antitrust violations than the NCAA and its member conferences and institutions,” Huma said.