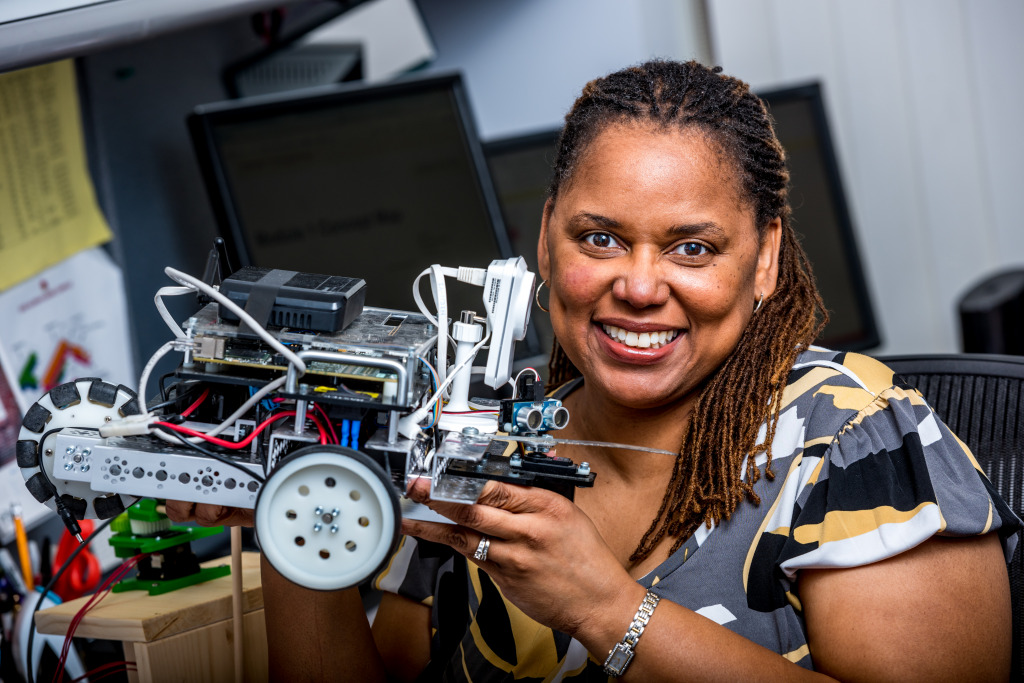 Carlotta Berry is an electrical and computer engineering professor at Rose-Hulman Institute of Technology and is a leader in the group Black in Engineering. (Photo courtesy of Carlotta Berry)

Carlotta Berry wants you to know that Black faculty who teach science, technology, engineering and math—known as STEM—matter.

The Avon resident and electrical and computer engineering professor at Rose-Hulman Institute of Technology is among the leaders of Black in Engineering, a network of about 400 Black engineering and computer science faculty that has spearheaded an initiative to inspire positive change, share experiences and stand in solidarity with activism efforts for Black people in America.

After George Floyd’s death in late May brought forth Black Lives Matters protests nationwide, Black academics and scholars began discussing their shared experiences with discrimination, marginalization and alienation within higher education, through the hashtag #BlackInTheIvory.

“I was intrigued to read about the accounts of other professors but was severely disappointed to see that there was almost nothing about engineering or computer science faculty,” said Berry, whose efforts have come during a sabbatical from Rose-Hulman for the 2020-21 school year.

Berry worked with Tahira Reid Smith, associate professor of mechanical engineering at Purdue University, and Monica Cox, professor of engineering education at Ohio State University, to set up a call-to-action meeting in which faculty could discuss social justice issues. The goal was to make plans to try to improve the climate for STEM faculty and help institutions promote inclusion and anti-racist measures.

The result has been a Black Engineering Faculty Speak video series, co-produced by Berry, that approached such topics as “What it means to be Black in Robotics?,” “When did you fall in love with engineering?” and “We Rise.”

“Our goal was to not only create a media blitz by having several videos but also a website and platform with a call to action and concrete action items similar to BlackInComputing.org,” Berry explained.

Berry said the campaign has received a lot of positive responses, and now she’s looking for it to spur positive change.

“I became an engineering professor 20 years ago while sitting in class and realizing that I had never had a professor who looked like me, acted like me, or even seemed interested in me,” she said. “I wanted to change the face of engineering by showing that the profession could be cool, interesting, exciting, engaging and, most importantly, diverse.”

Berry is no stranger to the media spotlight. She has written opinion pieces for The New York Times and the American Society of Engineering Education’s Prism magazine that highlight national issues related to professors from underrepresented groups, especially women in electrical and computer engineering. She also has spent her sabbatical year featured in several webinars and online presentations about women in robotics and engineering.

Her efforts to encourage the next generation of young people, especially African Americans and women, to pursue STEM education and careers have brought recognition among Women in Robotics’ 30 Women in Robotics You Need to Know About – 2020. She also was selected one of INSIGHT Into Diversity’s Inspiring Women in STEM, received a Leading Light Award from Indianapolis’ Women & Hi-Tech organization, and been featured in Reinvented magazine, where her story was named top story of 2020. She recently received the FIRST Robotics program’s Game Changer Award after being a volunteer and judge for robotics competitions throughout Indiana.

At Rose-Hulman, Berry has taught courses from mobile robotics to human robot interaction to electrical engineering design. She has encouraged students to learn by tinkering, hacking and making mistakes. She has even shipped low-cost kits to students’ homes to facilitate online learning during the COVID-19 pandemic.

“No matter how it is done,” she said, “students need to get their hands on something, even if it’s just to see a motor spin.”