Home » BEHIND THE NEWS: Trying to make sense of market mayhem

During the financial crisis of 2009, CNO Financial Group shares tumbled to 26 cents—a thrashing that company executives found difficult to fathom, one that cast doubt on the viability of the company.

“When you have millions of customers, millions of shareholders, thousands of employees and agents, that’s a pretty dark time if the markets were going to be right and we weren’t going to survive,” Ed Bonach, the chief financial officer at the time, recalled years later. “Thankfully, they weren’t right.”

Rather than getting swept up in the panic, company executives responded by going on a stock-buying spree that made them a mint when shares sprang back, increasing more than 60-fold over the next decade. 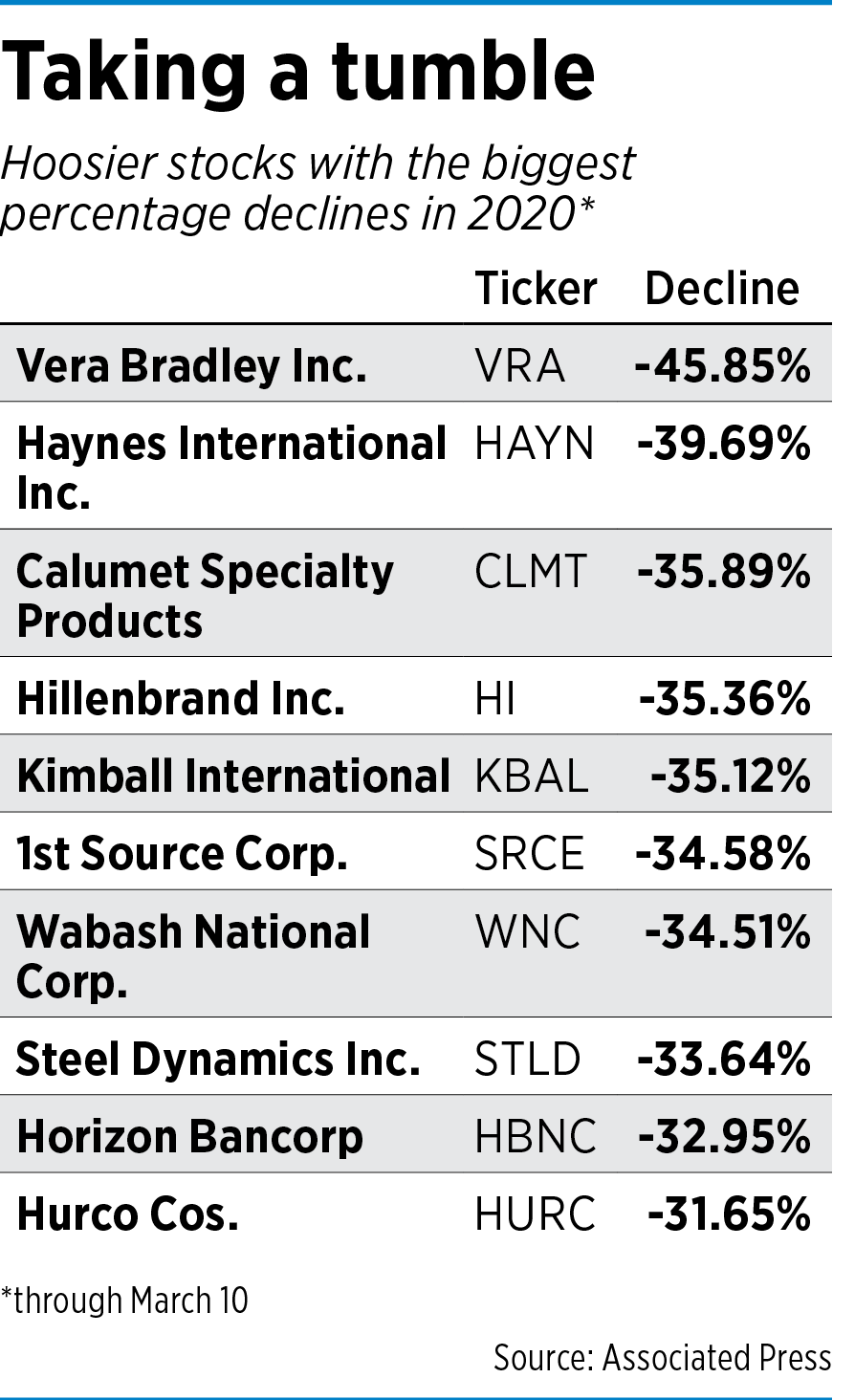 That episode serves as a stark reminder to investors that there’s little money to be made—and lots to be lost—by losing their cool when stocks go south, as they did to a historic magnitude over the past week.

The Dow Jones industrial average on Monday plunged nearly 2,014 points—its biggest point-drop ever. The nearly 8-percentage-point drop was the largest in more than 11 years.

Stocks erased more than half of those losses the following day but then plummeted the day after—continuing a stretch of spectacular volatility fueled by uncertainty over the economic implications of the global spread of the coronavirus, as well as fallout from an oil price war.

It might all sound reminiscent of the financial crisis of 2008-2009. But don’t confuse the two, said George Farra, a principal with Woodley Farra Manion Portfolio Management in Indianapolis.

He said that, before the coronavirus crisis, the economy had been growing at a moderate pace—not too fast and not too slow—and there was nothing akin to the housing bubble.

“We are not in a financial crisis; we are in a biological crisis,” Farra said.

That’s not to dismiss the significance of a biological crisis.

As IBJ investing columnist Mickey Kim noted last month, in past virus outbreaks—such as SARS, Ebola and Zika—markets snapped back within months.

However, this one feels different, said Mark Foster, chief investment officer for Kirr Marbach & Co. in Columbus, in part because it originated in China, affecting supply chains across the globe.

“You just don’t know the impact,” he said.

Yet market history would suggest that hitting the sell button—in effect, trying to time the market—is a losing bet.

“Selling near a bottom is one of the most destructive portfolio actions an investor can take, as they endure losses on the way down and miss gains on the way back up,” Woodley Farra Mannion wrote in its March 6 client newsletter.

The market’s decline has dragged down nearly all companies, with many dropping more than 30% since the start of the year.

Especially hard hit have been industries directly affected by the virus, such as airlines and cruise ship operators.

Also taking a pounding have been energy companies, which are bracing for a supply glut after the unraveling of an oil-supply pact between Saudi Arabia and Russia led both nations to vow to increase supply—despite weakening global demand.

Indiana’s publicly traded companies have fully participated in the selloff, with 22 of the 54 firms shedding at least 25% of their value since the start of the year.

Eight of the 30 Hoosier companies that have lost at least 20% of their value are banks, which are vulnerable to slower loan activity and higher credit losses in a weakening economy.

In addition, banks have long been pinched by thin net interest margins—the gap between what they charge borrowers and pay depositors. That gap, strained for years by the low-interest-rate environment, came under even greater pressure after the Federal Reserve slashed interest rates on March 3.

Suffering the second-biggest percentage plunge—40%—was Kokomo-based Haynes International Inc., a maker of alloys used in the aerospace industry. It’s taken a sales hit from the grounding of Boeing’s 737 Max, for which it supplies parts.

Many other Hoosier stocks fell for no discernable reason. 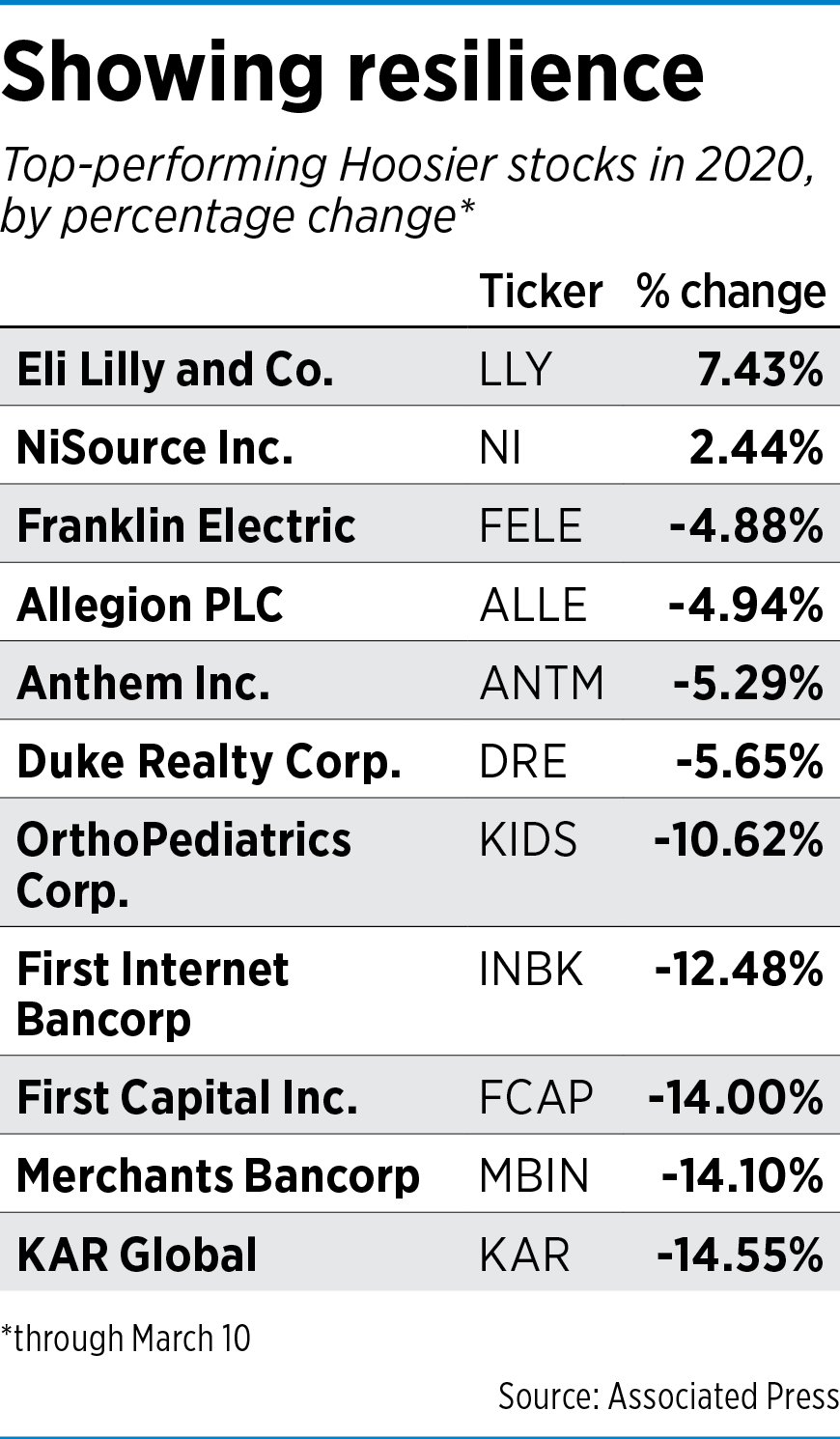 Yet despite investors’ bearishness, “I am not sure the typical company has been all that impacted so far,” Kirr Marbach’s Foster said.

“If you look at a lot of these companies, the underlying value of that business is not 25% or 30% different than it was three weeks ago. But in many cases, stocks have corrected that much or more. It is a matter of sifting through those where you don’t think the value has been permanently impaired.”

Farra has a similar mindset.

“Portfolio managers always have a list of stocks we would like to buy, but they’re too expensive or don’t fit the portfolio,” he said. “It is kind of like a wish list. Now we are looking at our wish list very hard because we have had every company pull back.”

One reason both men sense opportunity is the relative strength of the underlying economy.

“We’ve gone from having a fairly good economy to wondering whether all the external shocks will cause a recession. The market is adjusting very quickly to that,” Foster said.

On the other hand, he said, “central banks across the world are taking measures to provide stimulus. If you can contain the virus situation fairly quickly, I would think you could see a fairly quick snapback in economic activity.”

Farra said the economy also will get a boost from the recent plunge in mortgage rates, which has made houses more affordable and unleashed a wave of refinancings, and from declines in gasoline prices, which will free up cash for consumers to spend elsewhere.

“Those two are acting as automatic stabilizers for the economy,” he said. “I will be optimistic and say we will avoid a recession in 2020.”•