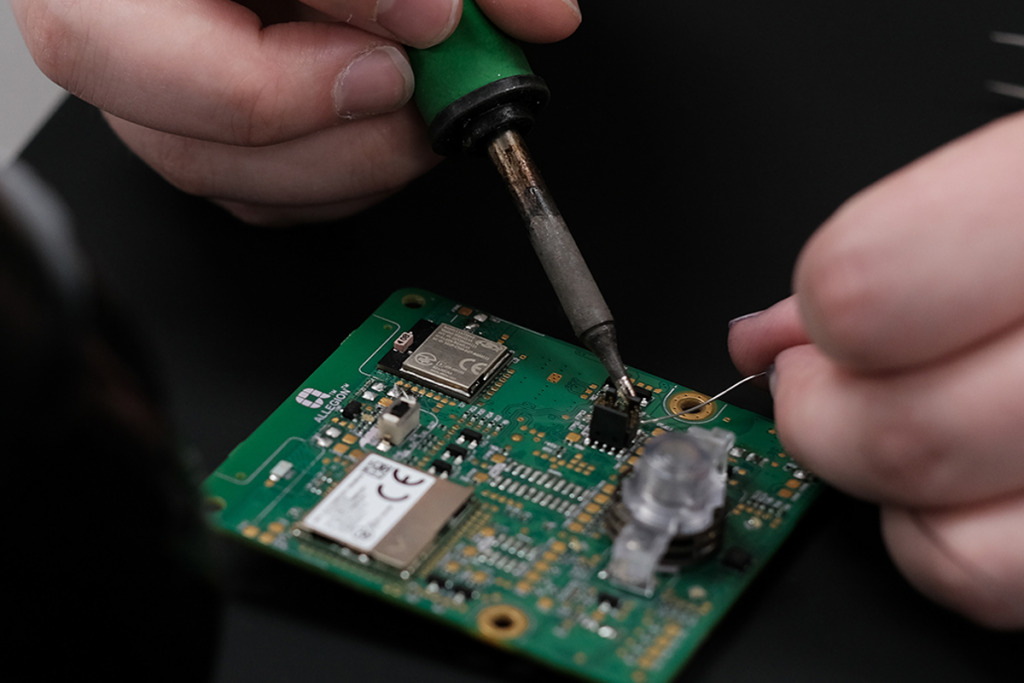 Allegion’s electronic locks and access-control products depend on semiconductor-built circuit boards, like the one being worked on here. A global semiconductor shortage has forced Allegion to sharpen its supply-needs forecasting. (IBJ photo/Eric Learned)

There’s nothing like a few billion dollars of investment and some big jobs announcements to quell unease that had been rippling through Indiana’s economic development sector as states like Ohio, Michigan, Kentucky and Tennessee announced megadeal after megadeal over the past year.

First, Netherlands-based carmaker Stellantis NV announced last week that it has signed an agreement with South Korean renewable-battery company Samsung SDI to build a $2.5 billion electric-vehicle battery plant in Kokomo that is expected to open in 2025 and create up to 1,400 jobs.

A day later, Indianapolis-based Eli Lilly and Co. said it would spend $2.1 billion to build two manufacturing facilities that will anchor a new innovation district in Boone County—the first project that could take advantage of an economic development tool approved by the Legislature earlier this year.

But experts say Indiana can’t take its foot off the proverbial gas. The competition for big projects remains tight, and the same problems business leaders have said are hindering the state’s jobs efforts—the high cost of health care in Indiana, an undertrained workforce and rising energy costs—are still true.

Still, Indiana’s economic development leaders say they are moving in the right direction.

Last week’s announcements came in the lead-up to the four-day Indiana Global Economic Summit at the Indiana Convention Center, where some 800 business and community leaders from at least 30 nations gathered to talk about the future of the state and global economy.

At that event, Indiana Gov. Eric Holcomb signed a trade cooperation agreement with the United Kingdom that could prioritize the state for new projects and lead to more stateside jobs. He then announced a new task force focused on establishing a strong Indiana presence to address a national shortage of semiconductors—used in most modern technology.

And the state announced some smaller deals as well, including a $25 million IndyCar training, office and workshop facility that will be developed by England-based McLaren Racing.

In all, state economic officials say they’ve landed some $14 billion in developments just this year. Compare that to 2021, when the state’s economic development commitments reached just $8 billion all year.

“It’s a quality over quantity approach. We’re focusing on industries that will be here [the next] 20 to 50 years—it’s very much a generational approach that we’re looking at taking.”

The state has been willing to shell out the cash to make the deals happen. The Stellantis deal includes Indiana’s largest-ever incentive package—$186 million in tax breaks, training grants and infrastructure spending.

And the state has yet to finalize its incentive package for Lilly.

But big spending is expected. Last year, in retooling the state’s incentive options, the Legislature allocated $300 million in cash for incentives and authorized $300 million in tax incentives for all projects in a year. The legislation—which officially takes effect July 1—removes caps on individual credits in favor of an overall cap and more flexibility.

That legislation also authorized the innovation development districts, which will be created in cooperation with local governments. The goal is to create multi-project developments that generate tax revenue that is captured to help finance additional projects in the districts.

In Boone County, Lilly will anchor what the state is calling the LEAP Innovation and Research District. That could receive the state’s first development district designation under the new law, but officials have not made a final decision.

“I hope this is an indicator to all the public across the state that this is something that isn’t just a fly-by-night-type process,” Lebanon Mayor Matthew Gentry told IBJ. “This is a strategic, thoughtful, next-generation play to make Indiana and Lebanon stronger.”

“It’s just one of several arrows in the quiver that we have as we’re talking to companies, and it just gives us another lever to pull, depending on their industry-specific needs,” Rosenberg said. “I think we’ve really capitalized on all the work that’s going into the community to bring these industries here, knowing there will be a talent pipeline for them.”

Katie Culp, CEO of KSM Location Advisors, said the state’s success in landing Lilly as an anchor for the LEAP district could go a long way in drawing more users to rural Boone County.

“That first move being a name like Eli Lilly and Co. is going to immediately allay any concerns a company might have about new potential location in that space,” she said. “I think it will really have a second-mover effect, attracting companies to that location, because they have the mentality of, ‘Well, it’s good enough for Lilly.’”

More down the pike?

Rosenberg said the state wants to do more with the tools it has at its disposal, particularly coming out of the global summit, which he said spurred new conversations among would-be investors in the state. But it also wants more tools.

Holcomb said the IEDC plans to go back to the General Assembly in January to ask it to further bolster the state’s incentive toolbox.

For its part, Lilly wants to bring in suppliers that might establish a presence near the company’s new manufacturing facilities. That could mean tens of millions of dollars more for the state—and hundreds of jobs—in line with what the drugmaker is doing on its own site.

“These companies are making the investments—they’re making huge investments—and they’ll attract suppliers into the market, too, and that’s what’s really appealing to other big companies: They don’t have to create the ecosystem themselves, and they can tap into those suppliers as well,” Rosenberg said.

Indiana will rely on that organic growth approach to build up innovation districts across the state, he said.

Among the groups that could eye Indiana for future projects is SkyWater Technology Foundry, a Minneapolis-based company focused on semiconductor manufacturing that has already established a presence near the Naval Surface Warfare Center in Crane as part of a deal with the U.S. military.

Thomas Sonderman, president and CEO of SkyWater, attended the summit and participated in a panel about semiconductors. He said the company views Indiana as taking big steps to expand its commitment to the microchip space, both in terms of educational commitments and by offering incentives for would-be manufacturers.

“I see us looking at multiple different angles to expand” the partnership in Crane, he said. “There are a lot of states that are talking about semiconductors, and I can say that Indiana is putting words to action in a way that’s very compelling.”

He added that the state appears serious about its advanced manufacturing efforts and taking down bureaucratic roadblocks that could delay projects.

“I think Indiana has done a great job of removing a lot of the uncertainty, which makes it easier to make decisions when you want to move fast,” he said. “And that’s the one thing that I think everyone’s making clear is, we have to move fast [on semiconductors]. So, the groundwork laid by Indiana over the last 15 years I think will pay dividends as this renaissance occurs in semiconductor manufacturing.” 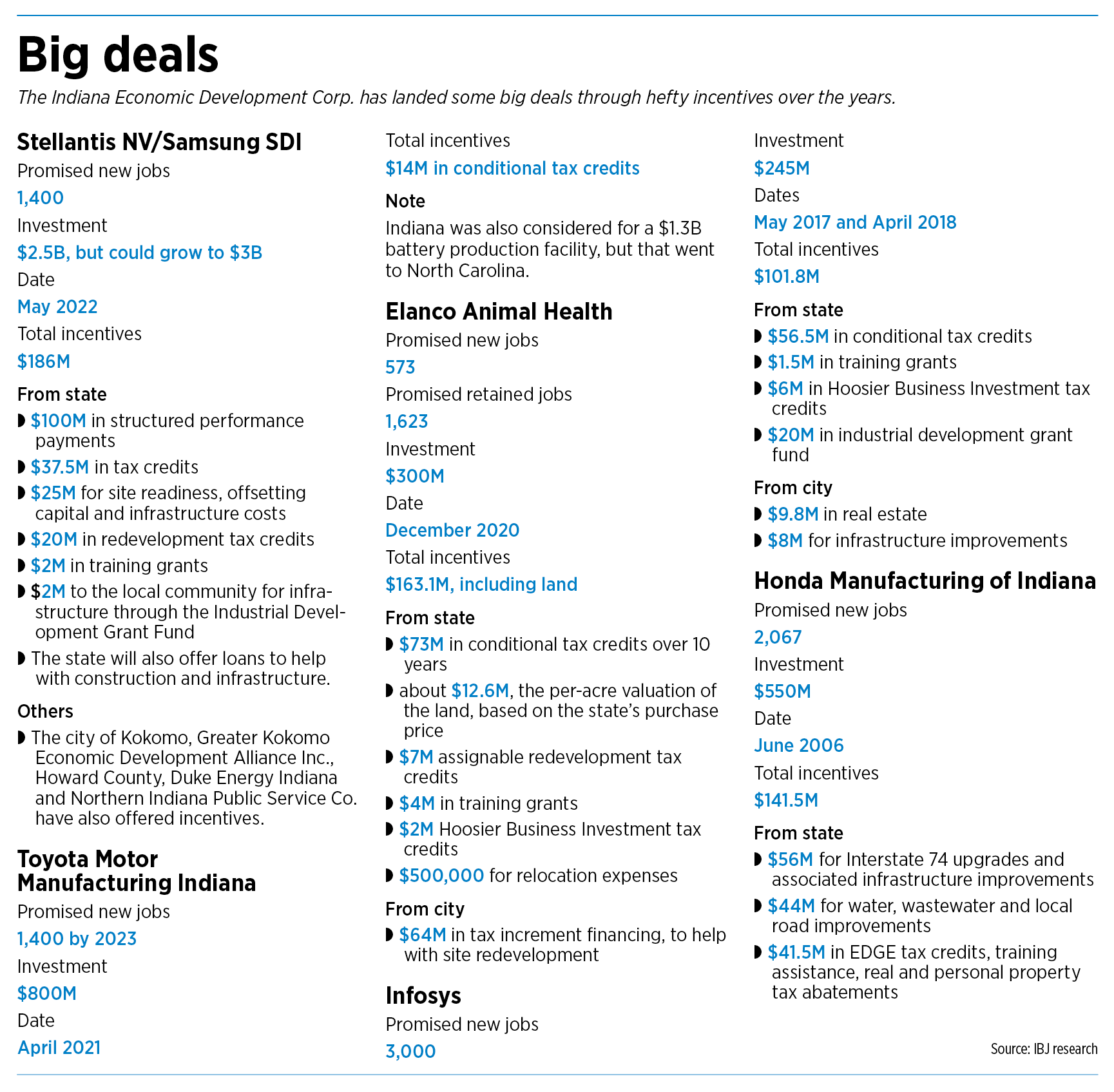 Likewise, Sen. Todd Young, R-Ind., said he sees his home state continuing to make strides in harnessing new technologies, as well as taking a leading role in developing the workforce of the future, on both the state and national levels.

For example, Purdue University on May 27 announced it would launch the nation’s first semiconductor degree program as part of its College of Engineering. On the same day, the state announced the creation of the Accelerating Microelectronics Production & Development task force, which is intended to strengthen Indiana’s role in semiconductor manufacturing through procurement of new projects and federal funding. (See page 17A for more information.)

“It’s obvious that our governor and our economic development leaders are pulling out every stop to ensure that Indiana is well-positioned to be a leader in emerging technologies and to ensure that we are poised for a high level of growth as we head more deeply into the 21st century,” Young said.

He is sponsoring legislation making its way through Congress that could infuse billions of dollars into new endeavors across all areas of technological manufacturing and research, including semiconductors and the creation of federally designated innovation hubs—about 10 across the United States.

He said Indiana could position itself to win one of those hubs if it continues exhibiting a commitment to semiconductors and high-tech manufacturing on products like electric vehicles, batteries and battery storage. With such a designation, Indiana companies would likely receive billions of dollars in government contracts.

“Our state’s economic development leaders could really position Indiana for success in competing for a federal tech hub designation,” he said. “Indiana could play a leading role in semiconductor engineering, design and manufacturing. Indiana will not play the only role, so it’s important that we identify those areas in which Indiana seeks to be a leader through working with our private-sector leaders and state leaders.”

Getting the rest right

Despite the success the state has touted over the past few weeks, some experts say much more must still be done to get Indiana on the same footing as surrounding states.

Ball State University economics professor Michael Hicks said Indiana is still playing from behind. He pointed to the state’s eagerness to hand out big incentives as a concern, although other states are making similar—if not even bigger—offers.

Hicks said he’s frustrated by the number and value of the tax breaks Indiana’s state and local governments hand out, given that the state climate is already among the best in the United States.

He specifically pointed to Stellantis’ deal, which he said offered incentives far higher than typical. “When you’re spending $130,000 per job, you’re signaling desperation,” Hicks said. “Indiana shouldn’t be desperate like that.”

He said the state doesn’t have the financial capacity to continue underwriting big deals like the one given to Stellantis, and the one likely to come for Lilly. He said, instead, the IEDC should focus on job training and new workforce programs.

And he worries that focusing on electric vehicle technology will “devastate the motor and auto parts industry” in the state, because those technologies rely more heavily on automation and require more highly skilled workers who are competing for fewer total jobs.

“So, it’s good that we’re getting those jobs, but it’s not a substitute for thinking more broadly about the overall [manufacturing] industry in Indiana.”

The IEDC’s Rosenberg, though, said the agency has no concerns about its decision to support the Stellantis project so heavily. Instead, the group sees the move as a hefty investment in the state’s future.

“The IEDC is not concerned about this setting a poor precedent for future projects—incentive offers are performance-based and are investments in Indiana’s future economy,” he said. “We are focused on quality over quantity, and we will continue competing to win for projects like these that align perfectly with our vision for Indiana’s future.”•

Correction: The print version of this story misattributed a quote from David Rosenberg, vice president of the IEDC, about having “multiple arrows in the quiver” for incentives to Lebanon Mayor Matthew Gentry.