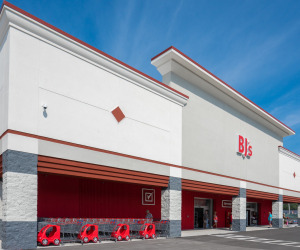 BJ’s Wholesale Club is pursuing plans to build a store in Noblesville that would be the warehouse-shopping chain’s first location in Indiana.

The company has submitted construction plans for a 105,000-square-foot building, plus a parking area and gas station, on undeveloped property at 13210 Tegler Drive, just north of Hamilton Town Center.

According to Noblesville Mayor’s Office Communications Director Emily Gaylord, those plans are currently being revised based on comments received during a May 20 meeting of the city’s Technical Advisory Committee.

BJ’s did not respond to email and phone messages from IBJ seeking information about the project.

Based in the Boston area, BJ’s is the third-largest warehouse club chain in the country. It opened its first location in 1984 and now operates 221 warehouse-style stores in 17 states, mostly in the eastern United States. The company went public in 2018. It reported sales of $3.78 billion in the first quarter.

The stores sell groceries, electronics, apparel and other items, offering a mix of brand-name and private-label items in a no-frills environment. To help keep its prices low, BJ’s deliberately limits the variety of items it offers. The average BJ’s store carries about 7,200 different stock keeping units, or SKUs. In comparison, the average supermarket carries about 40,000 SKUs and a supercenter might carry more than 100,000 SKUs.

Stores can range in size from 63,000 to 163,000 square feet, depending on the population of the surrounding area and the available real estate.

BJ’s top competitors are Sam’s Club and Costco. Sam’s Club has three local stores: 7235 E. 96th St. and 5805 Rockville Road in Indianapolis, and 1101 Windhorst Way in Greenwood. Costco also has three area locations: 6110 E. 86th St. in Castleton, 9010 Michigan Road on the northwest side, and 4628 E. County Line Road on the south side. It’s building a fourth location in Avon.

Indianapolis has a historical connection to BJ’s. The late John Geisse, a retail legend who founded Target and the now-defunct Venture Stores, founded The Wholesale Club of Indianapolis in 1982. The store inspired Walmart to open its Sam’s Club division in 1983. Former executives of The Wholesale Club were involved in the start of BJ’s in 1984.

Geisse, who is buried at Crown Hill Cemetery, built The Wholesale Club into 27 stores in the Midwest before selling the chain to Walmart in 1991 for about $175 million.