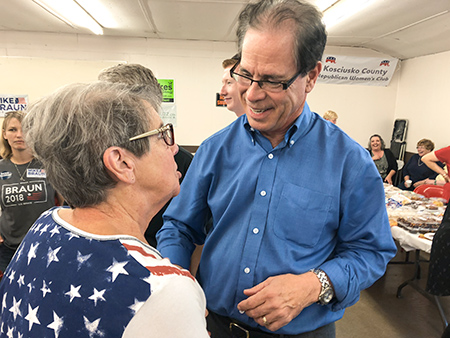 The value of U.S. Sen. Mike Braun’s total assets appears to have dropped last year, according to his latest personal finance disclosure.

Braun’s total assets are worth roughly $12 million to $49 million—compared with the $36 million to $96 million the Jasper Republican reported last year.

Reports from senators were due May 15 to the U.S. Senate Ethics Committee, but Braun requested and was granted two extensions. He filed his report for the 2018 calendar year on Tuesday. Lawmakers report their assets in broad value categories.

The decrease in total asset value mostly comes from a drop in his private stock in Meyer Distributing, the company he founded. Last year, Braun reported the stock was worth between $25 million and $50 million, but now he lists it as between $1 million to $5 million.

Part of that decrease could be attributed to Braun reducing his involvement with the company. His financial disclosure no longer listed him as an officer for Meyer Distributing or Meyer Logistics. U.S. Senate ethics rules prohibit him from serving in office and continuing to be CEO of Meyer Distributing.

“Individual questions about why the value of some of his holdings changed from 2017 and 2018 to 2019 reflects either changes in the financial market or his decision to sell or adjust certain holdings,” Braun’s chief of staff Josh Kelley said in a statement.

Part of the decrease is because Braun no longer receives a paycheck from the state of Indiana—because he was not a state lawmaker for any part of 2018—but the income from Meyer Distributing and Finishing Touches also both decreased.

Braun’s biggest asset is the property he owns with his wife, Maureen. They own and rent multiple properties that are valued between $8.46 million and $38 million, according to the disclosure.

The highest-valued single property is an undisclosed amount of timberland in Jasper worth $5 million to $25 million.

The properties also includes the land and building for Maureen Braun’s home furnishings store in Jasper, Finishing Touches, which has a value of $250,001 to $500,000.

Braun has less debt in his name than he did in the report filed last year.

Another mortgage and other lines of credit from the 2017 disclosure are no longer listed.

He also lists his wife as receiving a salary of more than $1,000 from both Paoli law firm Tucker and Tucker P.C. and Bloomington Shuttle Service.

Young also reported taking a trip from Washington, D.C., to Sea Island, Georgia, that was paid for by the American Enterprise Institute, a conservative think tank. The cost of the trip is not disclosed.