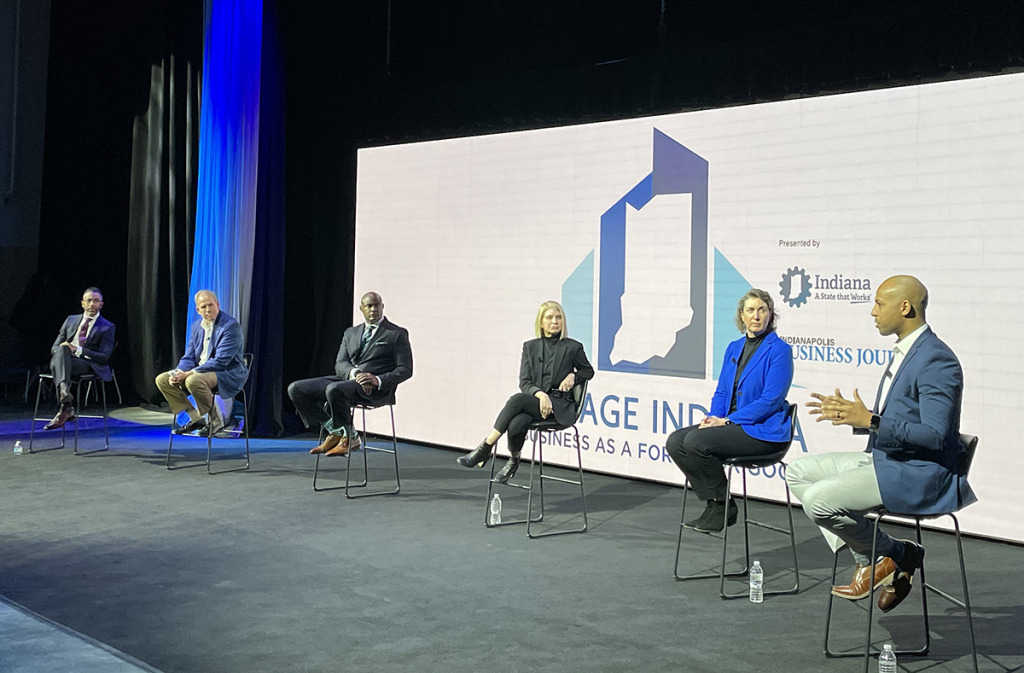 Eli Lilly & Co. Chairman and CEO Dave Ricks says his perspective on how businesses can be a force for good has changed this year.

During IBJ’s Engage Indiana 2020 virtual event Thursday morning, Ricks said he always believed enhancing diversity and inclusion was important, but this year showed him how serious a problem racial injustice is and fueled his motivation to do more to address it.

In June, in the wake of protests and riots over the death of George Floyd in Minneapolis, Eli Lilly and the Lilly Foundation pledged $25 million and 25,000 employee volunteer hours to address racial injustice and the impact it has on communities.

Eli Lilly is also one of several companies that established the Indy Racial Equity Pledge in October. The pledge aims to drive measurable progress in advancing racial equity, particularly in the areas of health, prosperity, education and criminal justice, for Black people in central Indiana.

Ricks said he believes businesses can—and should—set the tone in the community.

“Will we solve racial injustice in central Indiana in the next five years?” Ricks said. “No, I don’t think so, but we can make a meaningful difference, and that’s what we aim to do.”

A panel discussion during the annual event, which is co-hosted by IBJ and the Indiana Economic Development Corp., echoed the sentiment. (See video below)

Mel Raines, executive vice president of corporate communications, community engagement and facility operations for Pacers Sports & Entertainment, said the events in the summer shook the organization to its core.

“We have the power to really help change and lead in this, and we’re taking that seriously,” Raines said.

Pacers Sports & Entertainment was also a founding member of the racial equity pledge.

Raines said the company is looking at hosting more events on racial justice and equality at Bankers Life Fieldhouse, diversifying its suppliers, working to improve relationships between Black communities and law enforcement and dedicating its philanthropic dollars to racial justice efforts.

“I think we have a lot of work to do, but I think we’re certainly headed in the right direction,” Raines said.

BCforward CEO and President Justin Christian said diverse teams within companies are important because they bring a variety of perspectives that could be helpful when designing products or services.

“Diverse teams might be able to address those types of issues before that technology is rolled out to the public,” Christian said.

Patachou Inc. founder and President Martha Hoover encouraged for-profit businesses and not-for-profits to suss out the root cause of a problem, rather than applying a Band-Aid to an issue.

For example, the Patachou Foundation provides meals to children in need, but the organization is also working with Indianapolis Public Schools to offer paid internships for students to learn about the hospitality industry.

Joe White, senior vice president of school support for The Mind Trust, said business leaders should focus on authentic engagement with the community instead of only throwing money at an issue.

White said the city has a significant problem with education in the Black community: Only 6% of Black students in IPS schools have math and reading skills at grade level.

“We’re nowhere near where we need to be,” White said.

Harrison said he’s optimistic that real change will occur because of the number of organizations already taking action.

“We’re just getting started, but we hope to make some real inroads,” Harrison said. “We’re very excited. I think the lasting effort … will be sustainable because of the number of businesses and the energy.”

Also at the Engage Indiana event, IBJ honored Teresa Lubbers, commissioner of the Indiana Commission for Higher Education, with the annual Michael A. Carroll Award.

Lubbers, who served as a state senator from 1993 to 2009, is known for being a community leader and advocate for higher education reform. In the late 1980s, Lubbers co-founded with businesswoman Judy Singleton the Richard G. Lugar Excellence in Public Service Series, which works to prepare Republican women for elected and appointed government positions. More than 500 women have graduated from the program since the selection of the first class in 1990.

The Michael A. Carroll Award is given annually to a man or woman who has demonstrated the former deputy mayor’s qualities of determination, humility and service. Carroll was among six people killed when two small planes collided over southern Marion County on Sept. 11, 1992.