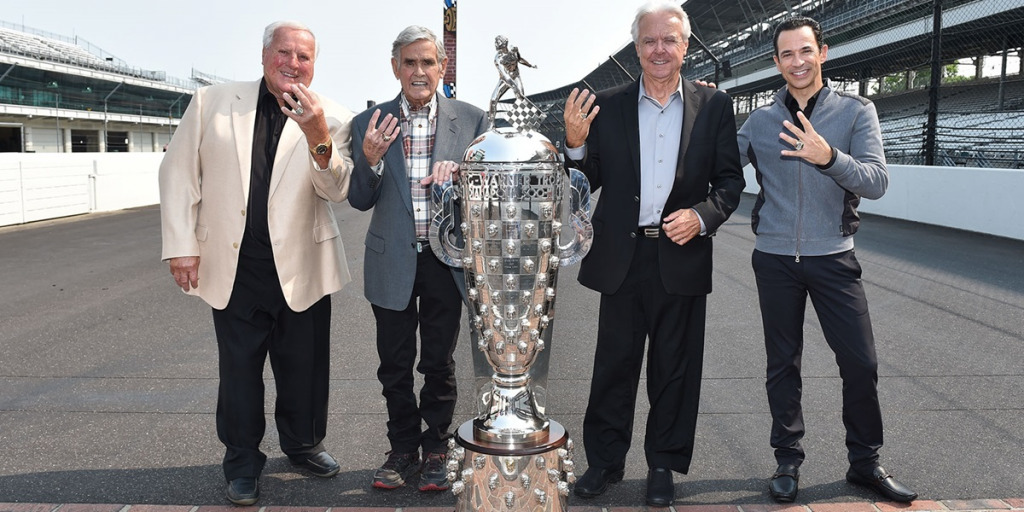 Helio Castroneves is taking his sweet time getting his mind around the spoils of winning his fourth Indianapolis 500.

Such as pouring red-hot liquid bronze into a mold for two bricks chiseled with his name, one of which will be placed on hallowed ground: the Yard of Bricks start/finish line of Indianapolis Motor Speedway. Or the chance to talk and laugh with A.J. Foyt, Al Unser and Rick Mears, the only other drivers to win the Indianapolis 500 four times.

For Castroneves, that carried special meaning beyond the brotherhood of racing.

The Brazilian driver’s fourth Indy 500 victory two months ago took 12 years to achieve, and the reality of being mentioned alongside the drivers he idolizes still has him pinching himself.

“Every time I’m with them, it blows my mind away,” said Castroneves, 46. “They helped me to set goals and I really pushed for it, and (Tuesday) I joined their club. I asked them if there is any membership fee or something like that. They said they will (add one) if I win five.”

It had been 30 years since the club added a member and that was Mears. He, Foyt and Unser happily welcomed Castroneves into the fold and The Associated Press was present for the event this week at the famed speedway.

The foursome chatted at a table in the pagoda before they flashed their Indy 500 rings and smiled during a group photo with the imposing Borg-Warner Trophy on the Brickyard.

Roger Penske, the motorsports titan who earned nearly half his record 18 Indy 500 wins with Unser, Mears and Castroneves in particular, also praised Castroneves even though win No. 4 came with Meyer Shank Racing a year after a long tenure with Team Penske.

“He’s part of the family,” the Captain said via an online feed. “To see him win his fourth race, it was tremendous. … I couldn’t be prouder.”

Foyt, Mears and Unser reflected on their Indy conquests over dinner Monday night before Castroneves arrived. They continued reminiscing at the table, emphasizing that while they sometimes made it look easy during their careers it was never that way.

“Some days the race track smiles on you and some days, you got it the other way,” said Unser, 82. “It’s not always that you’re going to think you’re going to win because your chances are very slim. There’s 32 other guys who want it as bad as you do.”

Having good cars certainly helped, but their wins all involved overcoming daunting challenges and a bit of luck.

Foyt was the first to four, winning in 1961, ‘64, ’67 and ’77, building his own chassis for several of those victories. Unser (1970, ’71, ‘78 and ’87) initially wasn’t on Penske’s Indy roster for the last one but took over for injured Danny Ongais — his replacement — and drove a March-Cosworth show car pulled from a Pennsylvania hotel lobby. Mario Andretti exited late and Roberto Guerrero’s car stalled in the pits, allowing “Big Al” to take over and lead the final 17 laps to tie Foyt.

Mears won in 1979, ‘84, ’88 and ’91, with that final victory requiring passing Michael Andretti late on the outside after being passed on the previous lap on a restart before pulling away in a backup car.

Castroneves seemed on a fast track to four with Indy wins in 2001, ‘02 and ’09, though his second win over Paul Tracy involved controversy and a lengthy postrace review. Overcoming his long gap between his third and fourth Indy wins demonstrated a doggedness that impressed Mears.

“I know when I won the fourth to get up here with two of my heroes, even though the number was the same, I was still not in their category,” said Mears, 69, Castroneves’ former mentor at Penske.

“So, to be able to be with them, it was incredible. And I’m pretty sure Helio feels very similar in that way. He’s worked hard for it and he did a hell of a job getting that fourth.”

Of course, Mears also warned his former protege that if he won a fifth Indy, he’d also be lonely as the only member of that club.

“The fee will triple if you win five,” Mears said.

Foyt, 86, suggested that today’s tech-laden open-wheeled machines could eventually produce a six- or seven-time winner. The need for an engineer to start the engine brought a colorful response from the no-nonsense Texan, who also noted that winning a 500 even once brings notoriety.

“Anybody that can win the race, it’s a great victory,” he said, “because the world knows if you won the Indy 500, it’s like the Kentucky Derby. You can have a bad horse, but if he won the Derby, the whole world knows it.”

Winning four Indys is a completely different realm and Castroneves is letting every moment sink in.

Though he kept his feet on the ground instead of climbing the fence as he did in May, Castroneves was over the moon with the accolades. He coaxed his elite brethren into putting their winners’ bling together with his for photos before grinning widely with Mears, Foyt and Unser on the track.

Pouring his own gilded bricks is just one of a series of unique honors Castroneves figures to receive for an accomplishment that doesn’t appear to be matched anytime soon.

“It makes me more appreciative for what I’ve done,” he said.