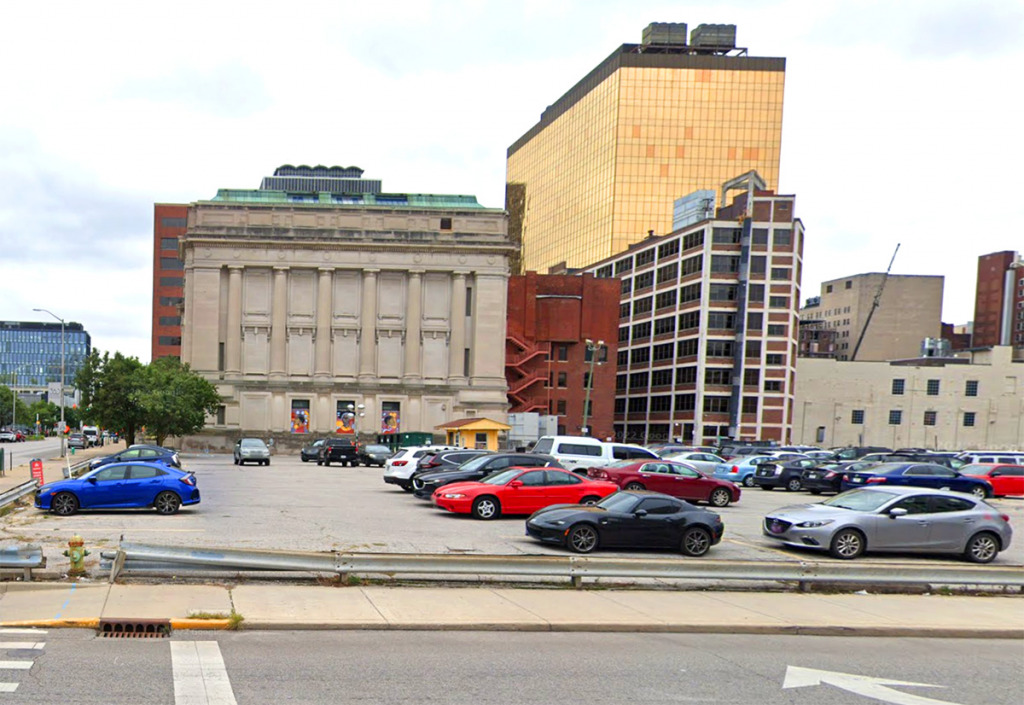 City officials on Friday issued a request for proposals to redevelop a parking lot just north of Old City Hall, potentially leading to new uses for the 112-year-old limestone edifice.

The Department of Metropolitan Development said it’s accepting bids through Dec. 2 for the 0.65-acre parcel at 222 N. Alabama St., at the southwest corner of the street’s intersection with New York Street.

While the focus of the RFP is on the surface parking lot, the city indicated it is open to proposals that incorporate a non-government use of the Old City Hall building—an unused piece of real estate that has challenged city officials for nearly a decade.

The site is just south of the Massachusetts Avenue cultural district and situated in the northwest corner of the Market East corridor in which numerous other redevelopment efforts are taking place. City officials think the parking lot site could act as a bridge between the two downtown neighborhoods.

Scarlett Andrews, director of the city’s Department of Metropolitan Development, said the focus of the RFP is new development. The city is asking for an offer on the property of at least $2.6 million.

“We’re thinking about what the impact of [infill development] is not just on this site, but the ripple effect it could have on surrounding development,” she said. “We’re considering what that can mean for street activity and creating a more vibrant downtown overall with more density and fewer dead zones. It will also have a positive effect on public safety and walkability downtown.”

Andrews said the RFP isn’t encouraging that the site remain as parking, but she doesn’t expect developers to be knocked for including it as long as there’s not an effort to include excessive amounts of parking. Whatever the proposal is, the design should be pedestrian-focused, she said.

The bid process, she said, is likely to garner interest from local and regional developers with interest in building a high-rise structure with either an apartment (aka “multifamily”) or hotel component—or both.

“We don’t specify [in the RFP] that it has to be multifamily, and we’re not really weighting multifamily higher than any other potential use,” she said. “But multifamily certainly could work on the site. We know that there’s still a demand for it, and the site is really attractive for high-rise density, either hotel or multifamily. Honestly, I would love to see a proposal that integrates multiple uses like that. It’s not unheard of to have a hotel and multifamily on the same site.”

Previous efforts to jumpstart development atOld City Hall and the parking lot included a hotel proposal: the 21c development announced in 2015, before the project was scrapped due to financing problems. Another RFP was issued for both the parking lot and the city hall building in 2017 and received nearly one dozen responses, but the effort ultimately petered out.

Andrews said the neglected condition of Old City Hall—and its Classical Revival design—is likely to mean most developers won’t include a use for the building in their proposals. The request for bids indicates any ideas for the former city hall should account for the historic nature of the building.

An extensive, 196-page analysis released in September 2021 found that it would take an investment between $36 million to $55 million to convert the Old City Hall building into a “grey box”—a real estate industry term used to describe a building that’s largely move-in ready but requires some tenant improvements like flooring and painting.

The analysis indicated that it would cost about $4.2 million to address a laundry list of deferred maintenance issues like facade repairs, roof upgrades and mechanical system replacements.

The parking lot is adjacent to a pair of surface parking lots along New York Street, which Andrews acknowledged some developers may try to incorporate into their proposals. However, those ideas would have to address site control issues as part of their pitches.

Such challenges aren’t unusual. In the Sherman Park RFP, issued in January, a few non-city-owned parcels were incorporated into the general site plan. Similarly, Flaherty & Collins in its response on the City Market request for proposals took into account parcels—including the Old City Hall site—for which it didn’t have direct control as part of a broader look at ways to invest downtown.

The project could be partially subsidized or incentivized by the city using tools like developer-backed tax-increment financing, New Markets tax credits, affordable housing incentives, abatements or payment in lieu of taxes. An amount would be determined through negotiations between the selected developer and city officials.

The Department of Metropolitan Development is accepting questions about the bid process through 5 p.m. on November 11.