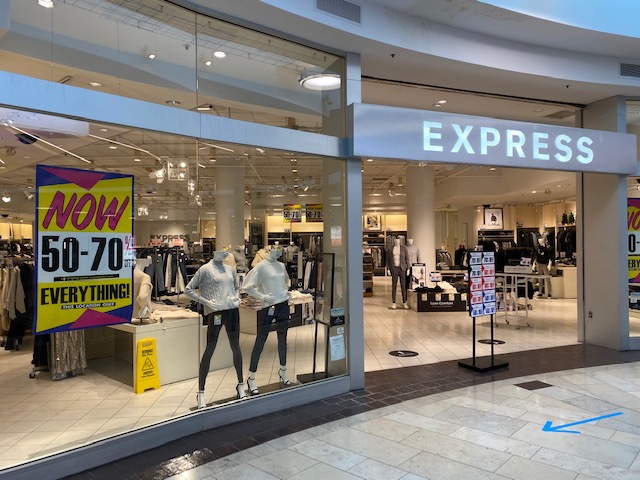 One of Circle Centre’s original tenants is clearing out merchandise and preparing to leave the downtown shopping center.

Express, a national fashion retailer that was on the downtown shopping center’s original tenant roster when it opened in 1995, is closing the third-floor store, employees confirmed Tuesday.

A store-closing sale touting discounts of 50% to 70% off is in progress.

The closure will leave four other Express stores in the Indianapolis area: at Castleton Square, Greenwood Park Mall, Clay Terrace in Carmel and Hamilton Town Center in Noblesville.

Express Inc. announced in January that it planned to close about 100 of its 600 stores nationally as part of a restructuring plan.

The retailer that caters to younger shoppers also said that it would lay off 10% of the staff at its Columbus, Ohio, headquarters and its New York City design studio. And that was before the pandemic.

Since then, the store has announced another 10% reduction in corporate staff and “additional liquidity measures” to save $550 million in savings, including $440 million in 2020.

The chain said it closed nine stores in 2019 and planned to close another 31 stores this year and 35 more by the end of next year.

Express went public in 2010. Limited Brands sold its remaining ownership interest in the chain in 2011.

Express sales and profit growth have slid over the past three years. The company announced last week that it suffered a $90 million loss in the fiscal third quarter after losing just $3.1 million in the same quarter of 2019.

Express officials attributed the loss to “continued steep declines in wear-to-work and occasion-based categories” of fashions.