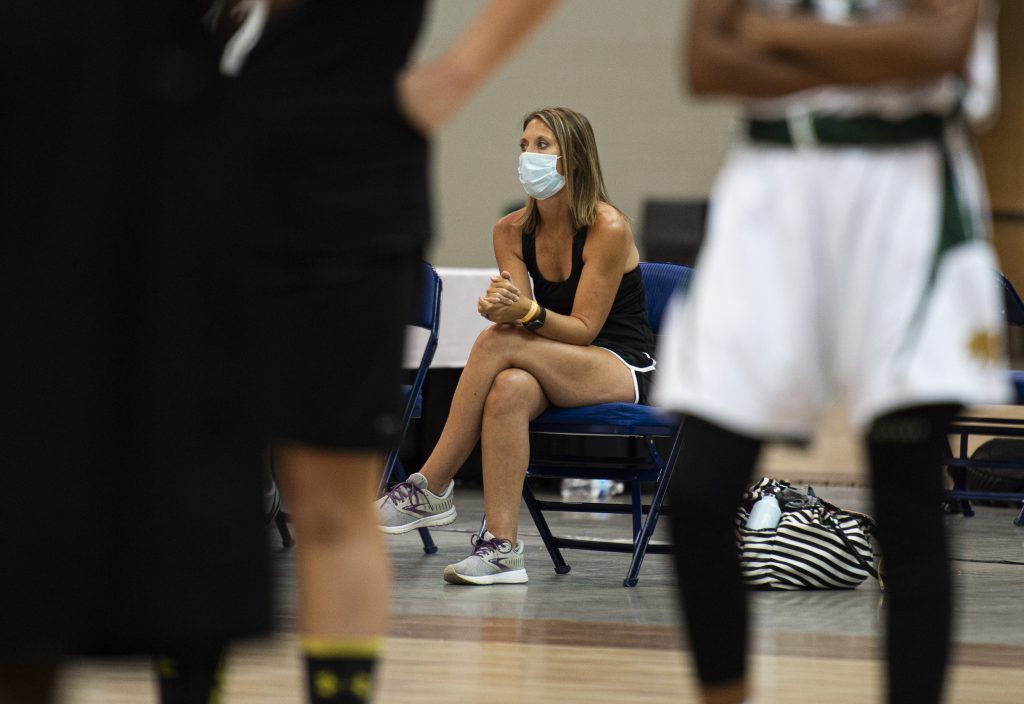 The Indiana Convention Center this week began welcoming back visitors after being closed for more than 100 days, making it one of the first major convention facilities in the country to host a large group amid the coronavirus pandemic.

The facility is co-hosting part of the Nike Tournament of Champions, a 300-team girls basketball event that’s expected to bring up to 9,000 people to Indianapolis through Sunday, injecting an estimated $8.9 million into the local economy. The first wave of teams played games Monday through Wednesday, with the second wave playing Friday through Sunday.

The event is operating under stringent guidelines, as organizers have worked closely with the city of Indianapolis and Marion County Public Health Department over the past few months to ensure it could proceed regardless of where Indiana landed in its phased reopening plan.

“We wanted to provide a venue for the girls to compete while keeping in mind the current climate with COVID-19 and enforcing restrictions in order to keep people safe,” said Amanda Ewing, the tournament’s director of event operations.

Those restrictions—actively enforced by event personnel and convention center security and staff—include a face mask requirement, social distancing protocols, an attendance limit (including being closed to the public), hand-sanitizing stations, signage and health checks for participating teams.

The effort to hold part of the tournament in Indianapolis began three months ago, after Ewing and event organizers determined the event—typically a 700-team basketball tournament at Chicago’s McCormick Place convention center that draws 30,000 people—could not happen as planned because of reopening restrictions in Illinois.

Instead, the event was moved to Indianapolis, Atlanta and Des Moines, Iowa.

“This is all about having a place to play for people who are ready to play while keeping everybody safe,” Ewing said.

In Indianapolis, organizers are leasing the entire convention center—about 566,000 square feet—through Sunday, putting down 22 courts across the facility’s 11 exhibit halls. Each hall has a maximum capacity of 250 people. In Chicago, the Tournament of Champions usually operates 78 courts across nearly 1 million square feet, drawing in public spectators.

(The Tournament of Champions is not the only girls basketball tournament in central Indiana this week. An entirely separate event also is being played at Westfield’s Grand Park.)

Ewing said she believes the tournament in Indianapolis was the first major event to occur at a U.S. convention center since March. The Des Moines portion of the tourney begins Thursday at the Iowa Events Center. Games at the Georgia World Congress Center in Atlanta begin July 23.

“I’ve had people reach out to me from all over the country and in other parts of the world wanting to know what we’re doing and how we’re doing it,” she said. “I think a lot of people don’t understand the impact of (the convention) business on local economies, both with tax revenue and with jobs.”

Visit Indy confirmed the Indiana Convention Center is one of first venues to host a big event during the pandemic.

“This is our bounce back, our first group that we’ve welcomed back inside the walls of the Indiana Convention Center since mid-March,” said Chris Gahl, vice president of Visit Indy. “We’re really pleased” to have the facility reopened.

Indianapolis has lost at least $300 million from events that have been called off because of the pandemic, with the possibility that losses could mount in the months ahead due to continued uncertainty.

But putting Indianapolis at the forefront of the nation’s reopening could help the city land new events, insiders say. Visit Indy has received more than one dozen leads since March—the Tournament of Champions was among them—for events occurring yet this year looking for new venues.

Andy Mallon, executive director of the Capital Improvement Board of Marion County, which operates the convention center, said co-hosting the Nike tournament is a step in the right direction for the city.

“We’re going to continue to improve, but this is how the new normal starts in our lives, in my opinion,” he said. “It means a lot to have folks in the building, as it proves that we can do it and we can do it safely and within the parameters set by local government.”

The tournament is also expected to be a boost for downtown hoteliers, which have battled single-digit and low double-digit hotel occupancy figures since mid-March. Most teams participating in the tournament are staying at downtown hotels.

“We know that COVID exists—we’re fully aware of that and we want to keep people safe,” Ewing said. “But we also want to help kick-start our industry in general, and help provide an example of how to keep people safe and still conduct business.”