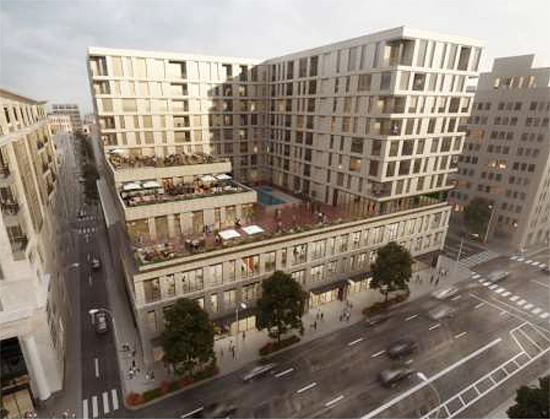 The project would be on the northeast corner of Pennsylvania and Vermont streets. (Rendering courtesy of the city of Indianapolis)

An East Coast developer’s efforts to build a mid-rise apartment building downtown across from the Indiana War Memorial won approval from city development officials this week, following months of conversations between the developer and representatives of a neighboring building.

The proposed 11-story project at 421 N. Pennsylvania St. has undergone extensive changes since it was revealed this spring.

The initial plan from Boston developer Charles Street Investment Partners LLC called for 165 apartments, 157 parking spaces and 2,000 square feet of commercial space on the site of the former Essex Hotel, which has been a parking lot for nearly the past 25 years. As a seven-story mixed-use building, the 39,300-square-foot development carried an estimated price tag of $15 million.

Revised plans for the building have overhauled its layout and increased its height. They call for 209 apartments and 214 parking spaces, while retaining the 2,000-square-foot retail element. Updated square footage and cost estimates for the whole projects were not immediately available. The project architect is Seattle-based NBBJ.

Some of the modifications resulted from extensive discussions between the developer and local attorney Peter Cleveland, a representative for the owners and occupants of The Residences at 429 condominiums. The condos sit immediately north of the project site.

Cleveland, who works in an office on the first floor of the building, said he worked with the developers to find something “that works well for all involved.” He said he believes the revised plans fit the bill.

He said residents of the condos—formerly home to Indianapolis Colts quarterback Andrew Luck—are generally satisfied with where things now stand, and have lent their support to Charles Street’s effort to win approval and begin work on the project.

Cleveland said the building’s original design didn’t fit in well with the surrounding area. Although the new building is taller, its aesthetics work within the corridor. The towering Indiana War Memorial, with an imposing set of steps at its base, is across Pennsylvania Street from the site. 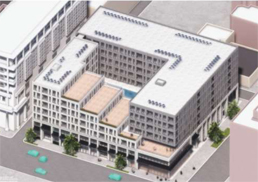 Plans from July showed a five-level terraced front that rose to the north. (Image courtesy city of indianapolis)

In the original plans, the base of the Charles Street building was two stories tall, with a five-story L-shaped tower on top of the base on its south and east sides. In the revised plans, the L-shape concept remains, although the base is three stories tall and the tower is eight stories.

The biggest change is on the northwest corner of the building. Earlier plans featured a terraced front facing Pennsylvania Street, with its five levels rising higher to the north in the direction of 429 Pennsylvania St., thus blocking some southern views from the condo building. The new design uses two terraces and instead orients them to rise toward the east, opening some of the space between the two buildings.

“It’s a balancing act,” Cleveland said. “I think we’ve struck the right balance with this solution."

The original plan for the building called for masonry brick, metal paneling, phenolic wood and glass. The new design appears to utilize many of those elements.

The listed representative for Charles Street, Indianapolis-based attorney Joseph Calderon of Barnes & Thornburg, did not return a call requesting comment on the project by Tuesday morning.

The nearly one-acre parcel has been under contract by Charles Street since at least June, with the firm in the process of buying the property from Cincinnati-based Chavez Properties, a Parking Company of America affiliate.

The property has long been used as a 165-space parking lot by Chavez, although it has gone through multiple legal battles through the years.

Chavez bought and demolished the Essex in 1994 with plans to redevelop the site to bring it in line with a city zoning rule prohibiting surface lots in areas adjacent to the Indiana War Memorial.

Since the demolition, the property has been granted multiple variances, reprieves and appeals that have generally allowed it to maintain operation as a surface parking lot. There were plans in the early 2000s to develop the property into a high-rise condo complex, but that deal fell through in 2004.