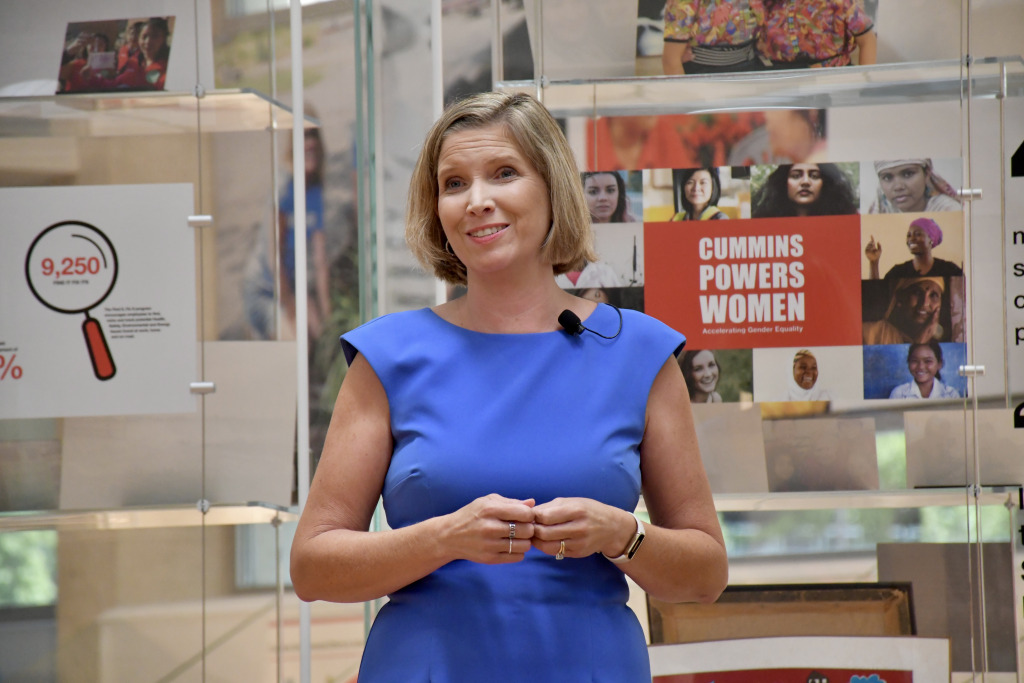 The incoming CEO of Cummins Inc. says addressing climate change will help fuel the Indiana-based engine maker’s success and growth as a company in the years to come.

Jennifer Rumsey was named the company’s CEO on Thursday, becoming the first woman to lead the company in its 103-year history and succeeding Tom Linebarger, who will step down Aug. 1 but remain chairman of the company’s board of directors.

Rumsey, who previously served as chief operating officer of the $28 billion engine manufacturer, will also continue as company president.

The company is familiar territory for Rumsey, who grew up admiring the engineers who are prolific in her hometown of Columbus, where Cummins’ headquarters and factories dominate the landscape.

Speaking at the Cummins Corporate Office Building in downtown Columbus on Thursday, Rumsey laid out her plans to chart the company’s future as it works to address climate change while keeping its legacy diesel business profitable.

Rather than viewing environmental concerns as an impediment to the company’s success, she sees decarbonization as a “growth opportunity” for her industry.

“We are making investments in our entire business, and that does include investments in diesel engines,” Rumsey said. “We have fuel-agnostic platforms that we’re developing that will lead the market and provide both the highest efficiency and reduced CO2 from diesel, as well as also enable our customers to start moving to alternate fuels, including natural gas and hydrogen.”

Though famous for its diesel engines, Cummins has invested hundreds of millions of dollars in hydrogen technology over the past several years, even as the viability of that technology on a massive scale remains uncertain.

Linebarger, who worked with Rumsey to develop the company’s carbon reduction strategy known as “Destination Zero,” said engine production remains vital to the American economy, and the company’s future will likely involve some combination of traditional diesel engines and newer, greener technologies.

“We can pine away for a future in 2035 where there’s charging stations everywhere, or just get on with the ones we have,” Linebarger said. “So our idea is to do both: lower the carbon in the ones we have now, and then make sure there are zero-carbon solutions out there.”

Rumsey joined Cummins in 2000 after working for a fuel cell tech start-up in Cambridge, Massachusetts. Since that time, the company has reduced CO2 emissions from its diesel engines by 20 percent, she said.

Destination Zero calls for an additional 30 percent carbon reduction of Cummins’ products by 2030, with the goal of reaching net-zero carbon emissions by 2050. Rumsey said the strategy is aligned with the Paris Climate Accords, an international treaty on climate change adopted in 2015.

“Our entire company is a part of destination zero, and decarbonization is a growth opportunity for Cummins,” she said.

When Rumsey talks about protecting the planet for future generations, she’s thinking about her two daughters who will have to live in that world.