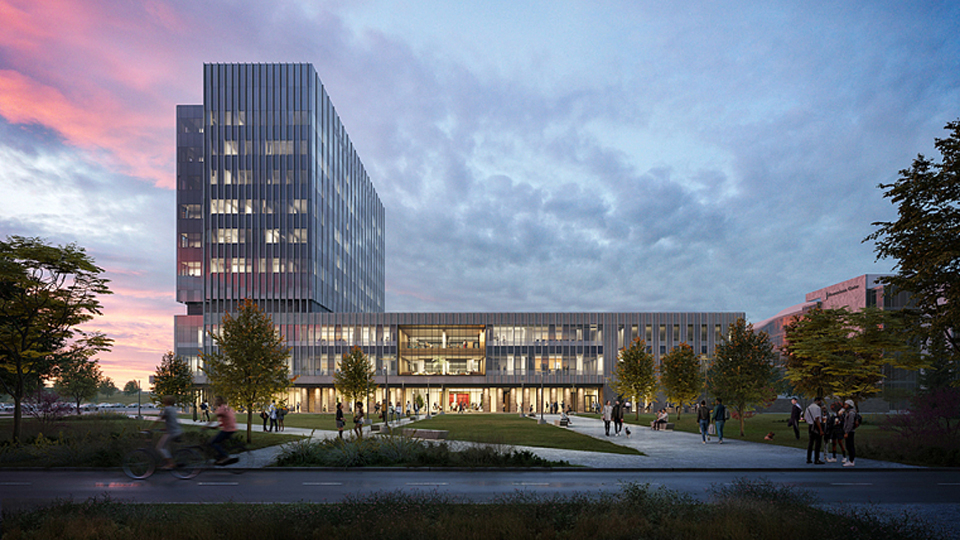 IU’s Medical Education Building will be 11 stories, with about 326,200 gross square feet. (rendering provided by IU Capital Planning and Facilities)

Indiana University’s board of trustees has approved the architectural design of the university’s new planned School of Medicine Medical Education Building in Indianapolis, the school announced Wednesday.

IU said the 11-story, 325,000-square-foot facility will be used to address instructional and research needs of programs in the university’s school of medicine.

The site for the $245 million building is west of Senate Avenue and just south of the IU Neurosciences Research Building and the IU Health Neuroscience Center on 16th Street. The school is currently housed in Fairbanks Hall at 340 W. 10th St.

The design features a three-story base structure with an eight-story tower. IU said the base structure will be used primarily for medical education. It will also include support spaces and shell space for a future research, as well as academic learning spaces, classrooms and a medical library.

IU said the architecture “expresses the unique character of Indiana University with its use of Indiana limestone and precast concrete accents.”

The eight-story office and research tower will include three floors of faculty offices and three floors of shell space for biomedical research, research support and offices. The building will also feature two floors that will be used for the building’s mechanical services.

The building will be co-located with the Indianapolis Academic Health Center, part of a $1.6 billion development downtown by IU Health.

The design was developed by Browning Day of Indianapolis and Perkins & Will of Chicago.