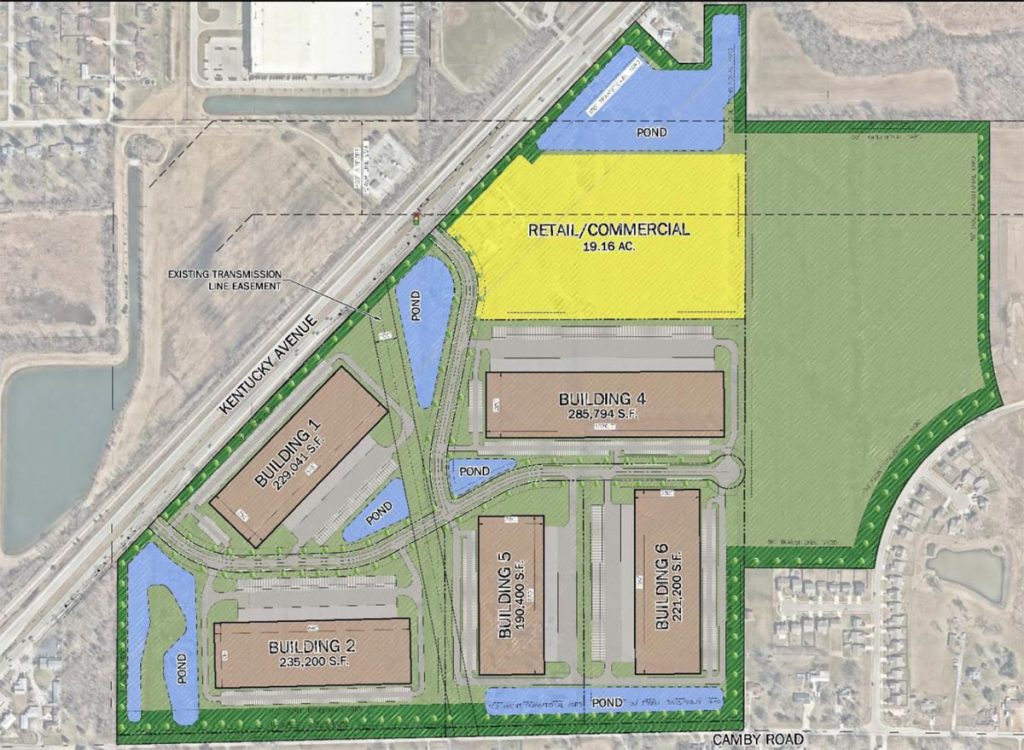 A site exhibit from Hillwood's zoning request. (Image courtesy of the city of Indianapolis)

Illinois-based Hillwood Enterprises LP hopes to build on about 173 acres of mostly agricultural land northeast of the intersection of Kentucky Avenue and Camby Road.

According to filings with the City of Indianapolis Department of Metropolitan Development, the project is expected to include five industrial buildings used for warehousing and distribution, ranging in size from 190,000 to 285,000 square feet.

The project would also feature about 19 acres of commercial or retail development on the property’s north side, with potential uses including lodging, occupational training and heavy general retail, according to filings.

It’s unknown how much would be spent on the project. Hillwood did not respond to IBJ’s request for comment.

If approved, development would likely require new infrastructure, although easements for utilities are already present on the property.

Hillwood is asking the city to rezone the land from various commercial and dwelling uses to the I-2 industrial designation, and then provide a variance for vocational, technical or industrial training uses; lodging; and heavy general retail.

But Department of Metropolitan Development staff is recommending the request be denied because it conflicts with the Decatur Township Comprehensive Land Use Plan adopted in 2018.

That plan recommended the bulk of the land be used for easily walkable, mixed-use village developments with a wide range of small businesses, housing types and public facilities.

The Urban Land Institute also has conducted a study of the site in recent years, in which it recommended most of the land be used for office flex space or light industrial and a park, among other options.

Hillwood’s request was denied by the Metropolitan Development Commission Hearing Examiner on Feb. 13. The full commission will hear the matter on March 4.