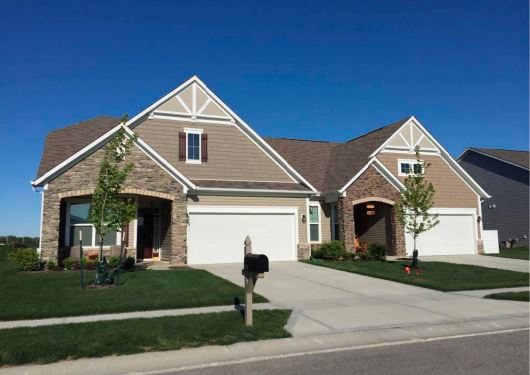 The Retreat at Morse development would include 94 attached single-family villas similar to those built at Miller's Walk in Noblesville. (Image courtesy Apollo Developers LLC)

Indianapolis-based Apollo Developers LLC is planning a residential development near Morse Reservoir that would include more than 90 attached single-family houses, according to documents filed with the city of Noblesville.

Plans call for the Retreat at Morse development to be developed on about 27.5 acres of land on the north side of East 196th Street, west of the intersection with Hague Road. It would be less than a half-mile east of Morse Park & Beach and situated behind existing homes.

The development is expected to include 94 attached single-family villas that would be built by the Indianapolis office of Atlanta-based Beazer Homes and be priced at an average of $400,000.

Andy Wert, a land-use professional with Noblesville-based law firm Church Church Hittle & Antrim, told the Noblesville City Council on Tuesday night that the homes would be similar those constructed by Beazer at Miller Walk between State Road 37 and Union Chapel Road.

Amenities at the Retreat at Morse would include a pickleball court, walking trail, water features and connectivity to Morse Park & Beach.

Apollo Developers and the Gordon family, which owns the land, have requested that the land be rezoned to a planned development district.

Wert told the council the land is currently outside Noblesville’s city limits and the developer will submit an annexation request if rezoning is approved.

Apollo is owned by Ed Hamilton and Neil Goradia. The company has focused in recent years on residential subdivision development in Hamilton County.

Apollo is also planning the Midland South development in Westfield, which will have 49 townhouses along the Midland Trace Trail and across from Grand Junction Plaza.