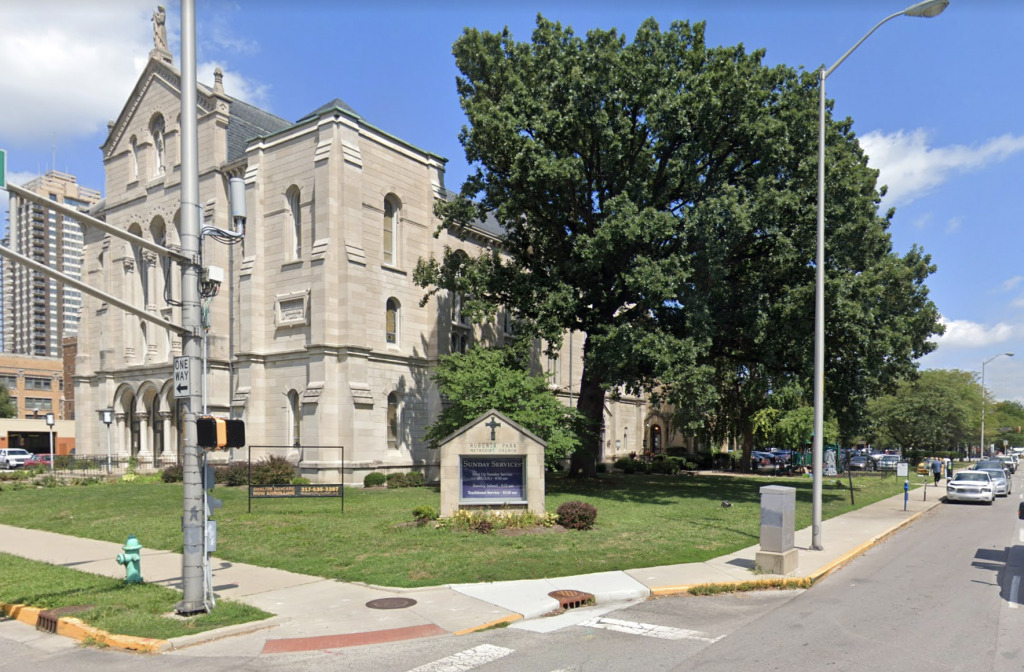 A downtown church has paused plans to build a mixed-use structure at the northwest corner of Vermont and Alabama streets as its primary tenant reevaluates participating in the project.

Roberts Park United Methodist Church, 401 N. Delaware St., has planned for more than a year to develop a five-story building with a day-care facility, parking, a health clinic and office space atop the adjacent surface parking lot directly east of the church.

The day-care facility at the building would replace the one now housed inside the church. The parking lot would be of particular interest to prospective tenants because it touches on the Massachusetts Avenue commercial and cultural corridor, which runs diagonally through the Vermont/Alabama intersection.

“In recent years, we have fielded an increasing number of inquiries about the prospect for selling and/or otherwise developing something on that site,” Clayton Miller, an Indianapolis attorney who is the church’s building committee chair, told IBJ.

“(We thought) if we could figure out a way to have a development on that site—which not only generated income for church purposes, but also allowed us to build out a state of the art day care—that was an enticing proposition,” he said.

Preliminary plans for the building include an undisclosed health care user as its anchor tenant—perhaps as a clinic or walk-in provider of some kind.

The project would also include extensive space for parking, although Miller was unable to provide an exact figure. The current surface lot has space for about 65 cars, and Miller said the new structure would be able to accommodate more.

The Indianapolis office of Los Angeles-based brokerage CBRE began marketing the building’s top floor in November 2019, with a listing for about 28,000 square feet of office space.

But the project is now in a holding pattern while the prospective health care tenant, which Miller declined to identify, decides whether it wants to move forward with a lease for space on the first floor. The decision to pull back on the project came shortly after the coronavirus pandemic first hit Indiana in March.

“The prospective health care tenant is reevaluating its investments in light of COVID,” he said. “It also is experiencing just a change in its financial situation because of [the virus].”

Miller declined to say how much the church planned to invest in the development, but said most of it would be financed. He said without a master tenant in place, it’s unlikely financing could be secured.

He said the church is still committed to putting a new structure on the lot, even if the original plan must be revisited or adjusted.

“We have pulled back to reassess, but I think, certainly, there remains an interest in seeing the property utilized as more than just a surface parking lot—and by that I mean with some kind of a building on the site,” he said. “The church remains open to identifying an appropriate master tenant—ideally, but not necessarily as a requirement, connected to a health care facility.”

Cornerstone Cos., an Indianapolis health care real estate development firm, has been an owner’s representative for the project since its inception. And local architecture firm Browning Day created initial designs for the building, although those were not immediately available.

CBRE broker John Vandenbark, the listed agent for the property, referred all questions to the church. A representative for Cornerstone didn’t respond to a request for comment.