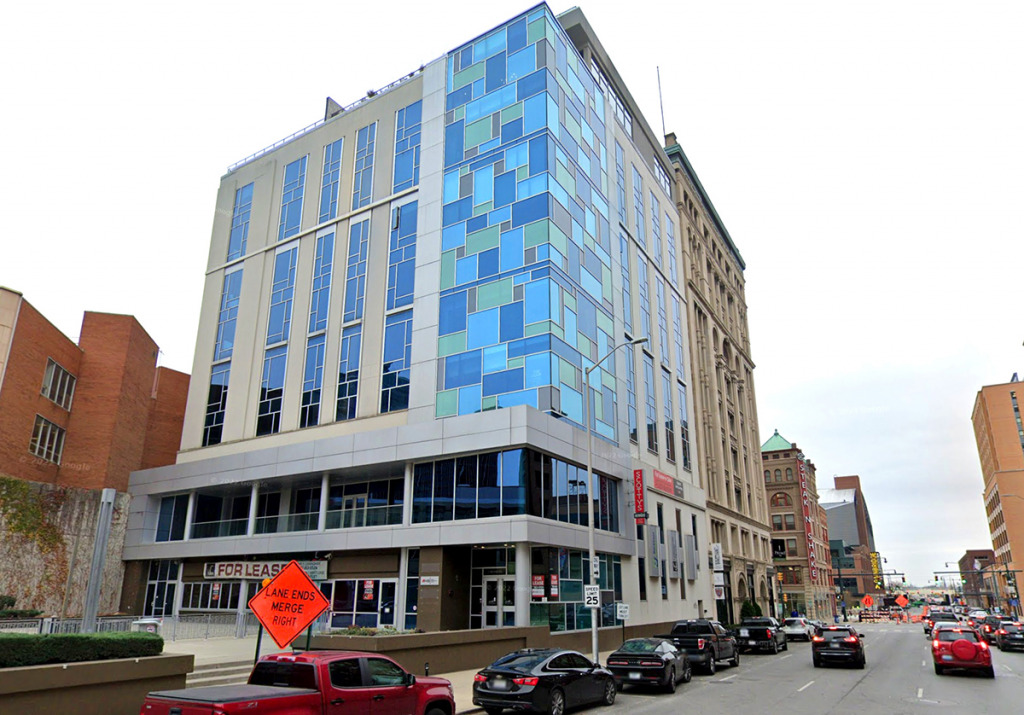 A downtown building that was once home to a Scotty’s Brewhouse restaurant and several office users has been sold to a group of local investors.

Allen Plaza, a nine-story building at 1 Virginia Ave. was sold by Jefferson Plaza LLC, an entity of Allen Property Group. It was purchased for an undisclosed price by One Virginia LLC on Jan. 13.

Constructed in 1948, the building wraps around three sides of the Majestic Building at the corner of Pennsylvania and Maryland streets and has an adjacent 8,500-square-foot outdoor plaza on the north side fronted by Virginia Avenue.

The property has more than 20 individually owned condominiums that were not included in the sale.

Developer J. Greg Allen acquired the building, formerly known as Jefferson Plaza, out of foreclosure in February 2005 and spent about $14 million to renovate the building and install a modern glass facade. Scotty’s occupied the ground floor from 2009 until closing after the chain declared bankruptcy in December 2018.

The building’s 58,800 square feet of office and retail space is now mostly vacant, following exits in recent years by HomeAdvisor, third-party logistics company Backhaul Direct and the corporate headquarters for local restaurant chain Noble Roman’s Pizza. Allen Commercial Group, an affiliate of the former owner, is expected to vacate the property in the coming months.

“This is a great property with a lot of untapped potential,” said Indianapolis broker Rob Coombes, a minority shareholder in the holding company that’s buying the building. “It’s not as big as [the downtown towers], but it’s large enough to be a headquarters of a company that wants to make a statement about their commitment to Indianapolis.”

Coombes, a broker at Shook Realty Group, said since the ownership group is still being finalized, he was not yet authorized to disclose its members. However, he described the group as “all local real estate professionals and enthusiasts, and all people who very much believe in downtown Indianapolis.”

He pointed to projects like the renovations to Gainbridge Fieldhouse (and the nearby plaza now under construction), the redevelopment of Pan Am Plaza, plans for the Elevator Hill campus on the near-east side, and Indy Eleven owner Ersal Ozdemir’s project on the Diamond Chain site as contributing factors to the ownership group’s plans to invest in the building.

Coombes has been tapped to find new tenants for the building, now known as One Virginia, including the nearly 9,500-square-foot restaurant space on the first floor.

A portion of the outdoor plaza is designated for exclusive use by a restaurant tenant. The building also has 49,500 square feet of office space available on four floors.

“The benefit of the building being vacant right now is that several of the spaces are move-in ready. Likewise, we’re able to be extremely flexible on demising the space and the layout to best suit our end-users,” Coombes said, adding that if a single company opts not to use the entire building, the leasing team could find other users that would complement a primary tenant.

“It’s a great building in a prime location that is poised for a tenant or a combination of tenants that can really contribute to downtown Indianapolis,” he said.

The ownership group has hired ALO Property Group to manage the building. The manager is expected to work directly with the property’s condominium owners association on upkeep of the property. Coombes said the building will be renovated “from the inside out,” including office space, the plaza and streetscape. He said a future major tenant would likely be able to have some of the exterior improvements tailored to their brand.