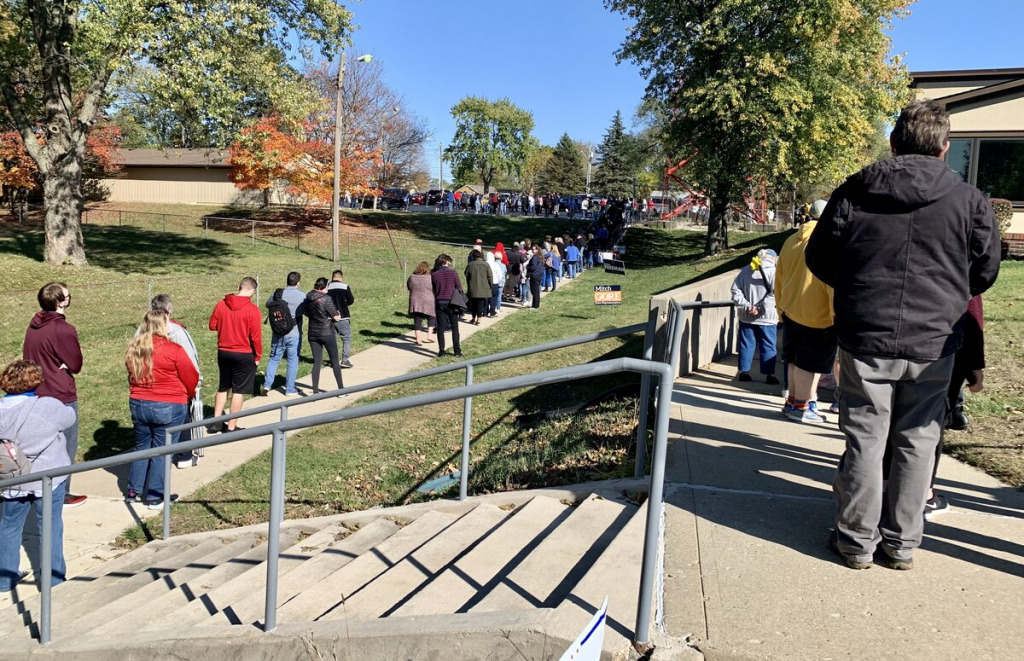 Thousands of voters cast ballots last weekend at Marion County voting centers, including this one at the Perry Township Government Center. Some voters in Perry Township waited more than four hours to vote. (IBJ photo/Lesley Weidenbener)

Early voting in Marion County has nearly tripled the numbers seen at this point during the 2016 presidential election as thousands of voters have submitted ballots by mail and thousands of others have waited for hours in line to cast a ballot—a frustration that voters say they aren’t seeing in other counties.

Turnout skyrocketed over the weekend, as five additional in-person early voting centers opened in Marion County. Nearly 27,000 voters in Marion County have cast ballots in person since Saturday. Prior to Saturday, early voting was only available at the Indianapolis City-County Building.

During the weekend, some voters waited nearly eight hours to cast a ballot. On Saturday, 8,858 Marion County residents voted in-person and on Sunday, 8,291 individuals voted in person.

Monday saw even higher turnout, with 9,566 voters casting a ballot in person. And on Tuesday morning, a three-hour long wait time was reported at St. Luke’s United Methodist Church.

A total of 55,030 voters had cast ballots in person as of the end of the day Monday.

The long wait times have sparked frustration among Marion County voters, especially as voters in neighboring Hamilton County report waiting only minutes to cast a ballot.

Hamilton County Election Administrator Beth Sheller told IBJ on Tuesday that the average wait time has been about 30 minutes.

But eight in-person early voting locations are available in Hamilton County, compared to six in Marion County—even though Marion County has significantly more voters, with more than 650,000 registered individuals.

“The math doesn’t add up, except when you factor in Marion County is a Democratic county,” Bell said.

The fight over the number of early voting locations in Indianapolis has been ongoing for years, and the available satellite locations this year were not offered in the past two presidential election years.

From 2009 until 2018, Marion County only had one early voting location—the Indianapolis City-County Building. Last year, for the November municipal election, the county opened a total of five early voting centers.

“It’s so frustrating,” Sweeney Bell said. “If we could change it, we would.”

But Jennifer Ping, the Republican member of the Marion County Election Board, said the Marion County Clerk’s Office proposed the early vote center plan that was approved by the board, and she knows that recruiting poll workers has been an issue that has limited how many locations can be properly staffed.

“I’m not opposed to more polling locations at all,” Ping said. “I think we need to look at that in the future.”

Ping said the turnout has been unprecedented, which means it would have been difficult to anticipate.

“It’s almost impossible to plan for the unknown,” Ping said. “You just have to plan on what you’ve known before.”

On Election Day this year, 187 vote centers will be available in Marion County. A registered voter can cast a ballot at any of these locations—a change that was made in 2019.

This is substantially more than the 22 vote centers that were open for the primary election on June 2. At the time, local election officials said they struggled to recruit enough poll workers to open more locations.

But 187 vote centers is still less than the 270 vote centers that were available in Marion County in past years.

Russell Hollis, deputy director of the Marion County Clerk’s Office, said he believes the number of vote centers for Election Day will be enough because so many voters are casting ballots early.