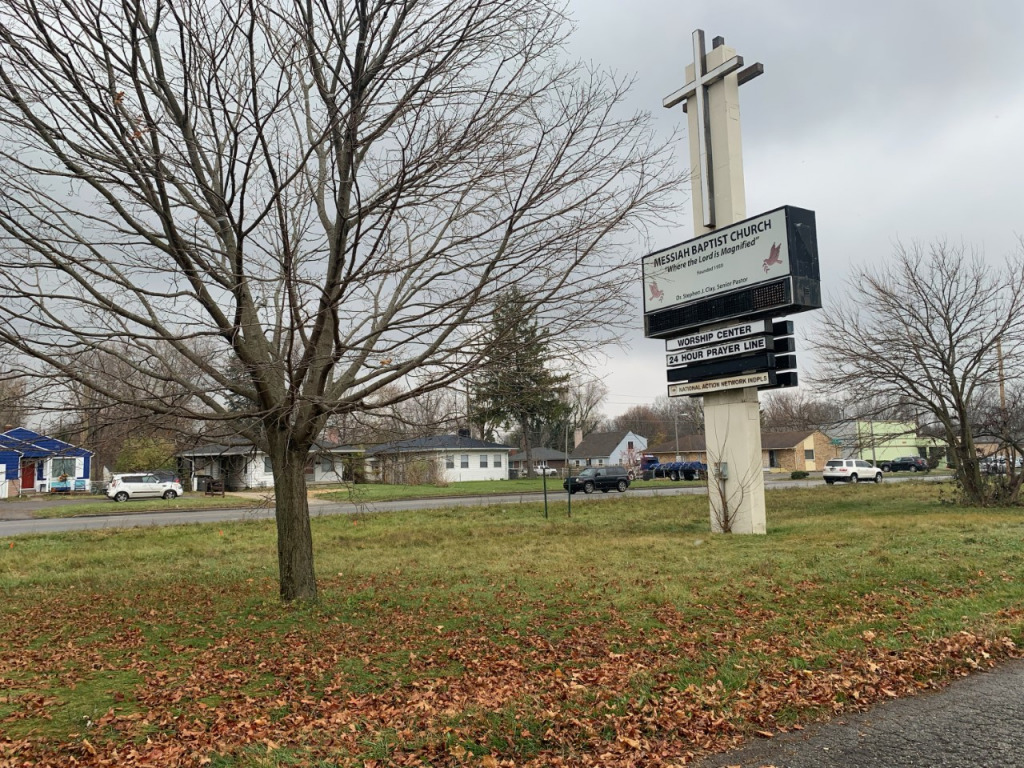 Plans call for the former property of Messiah Missionary Baptist Church to be used for affordable houses an apartments. (IBJ photo: Taylor Wooten)

An area designated by the city as the “East 38th Street Corridor” has been chosen as a Lift Indy neighborhood, making it eligible for a $3.5 million investment from the city of Indianapolis over the next three years.

City-County Councilor Keith Graves said the investment was much needed.

“This $3.5 million commitment from Mayor Hogsett for the 38th Street Corridor is a significant investment in an area that has been underfunded and overlooked for way too many years,” Graves said.

The city will spend $2 million on housing and homeownership to promote equitable, affordable development in the corridor.

To promote homeownership, the United Northeast Development Corp. and the Indianapolis Neighborhood Housing Partnership will utilize the funds to develop five single-family homes on the northern portion of 5640 E. 38th St., the former property of Messiah Missionary Baptist Church. The properties will be required to be affordable for those making 80% or less of the area median income.

The IndyGo Purple Line, a bus rapid transit route slated to be completed by fall 2024, runs in front of the future site. The Housing Partnership purchased the property along the line for its equitable transit-oriented development program.

In addition, the Indianapolis Neighborhood Housing project will utilize the city funds to create 10 low-interest mortgage loans for homebuyers earning up to 80% of the area median income.

For renters, the Lift Indy partnership is expected to contribute some funds toward 305 affordable housing units in development on the corridor. These will include a 100-unit Low Income Housing Tax Credit, or LIHTC, apartment development on the former church property at 5640 E. 38th Street and a 205-unit Flaherty & Collins Properties LIHTC complex at the southwest corner of 38th Street and Arlington Avenue.

The Lift Indy grants will also support economic development initiatives. Equity1821, a Black-led loan fund, will receive $200,000 to dole out up to 10 loans to 38th Street Corridor small businesses or business owners. Another $50,000 will launch a Cook Medical and East 38th Street Coalition program teaching financial readiness and skills to entrepreneurs.

The area is a well-documented food desert, meaning that most residents live more than a mile from the nearest grocery store. Cook Medical is supporting a full-service grocery store on the site of its manufacturing facility, dubbed the Indy Fresh Market, and the city will provide $50,000 to support the food access efforts of the market and the United Northeast Development Corp.

Along with the Cook Medical facility, the Indy Fresh Market, and the Purple Line, the area will also include an Eskenazi Health primary care clinic at 6002 E. 38th St., slated to be completed in 2024. The Indy Fresh Market, now under construction, is scheduled to open in 2023.