A new player has joined some west Indianapolis residents in opposing a proposed wastewater treatment plant, but the plant appears to be on a path to approval.

The Hoosier Environmental Council is now supporting the West Indianapolis Neighborhood Congress in its fight against the wastewater treatment facility the Ben Davis Conservancy District wants to build at 900 S. Tibbs Ave.

The conservancy district—a little-known political subdivision controlling the area’s pipes—wants to build a plant within WINC’s boundaries that would not serve the neighborhood’s residents.

Members of WINC have been vocal opponents of the development, and Citizens Energy Group offered to purchase the conservancy district partially as a means to stop the controversial project. But if the Indiana Department of Environmental Management approves the pending permit, the plant can move forward.

For the conservancy district, the matter is financial. The group’s leaders and some constituents say having their own water treatment plant would mean lower rates than what they pay Citizens Energy Group to treat the wastewater. But for the western Indianapolis neighborhood that’s already home to Citizens’ nearby, large Belmont Advanced Wastewater Treatment Facility, it’s a matter of environmental justice.

“It’s just too much,” she told IBJ. “And the very fact that this [proposed] facility will not service the residents makes it a horrible proposition that the neighborhood is going to be squeezed between two wastewater facilities.”

The EPA’s environmental justice screening and mapping tool ranks the area—which is encompassed by the CSX rail line, the White River, Raymond Street and Holt Road—in the 99th percentile for the state in wastewater discharge toxicity.

The proposed wastewater treatment plant would release treated water into Neeld Ditch, which is on a floodplain. Brooks said there is concern that nearby residents could “have to deal with sewage water.”

Some early documents from IDEM and the conservancy district point toward using Eagle Creek as a discharge location, but that option was dismissed due to higher infrastructure costs.

The district’s three-member board dismissed environmental concerns relating to the plant, arguing that Citizens’ combined sewer system is more prone to overflowing into streams. The usage of a smaller, separate sewer system could have benefits, the district said.

“While it has come to our attention that some citizens are opposed to the proposed WWTF citing environmental concerns, we believe that the proposed state of the art WWTF would benefit Indiana waterways,” the statement said.

IDEM has already issued a draft permit and a tentative determination to approve a new discharge into the receiving stream, said IDEM Public Information Officer Barry Sneed. For the permit to be denied, IDEM would have to receive new information proving the requirements for the permit aren’t being met.

The wastewater plant won’t have negative impacts if it is complying with the permit, Sneed told IBJ in an email. But Brooks is concerned the plant will cause problems regardless.

“We know that there’s going to be some issues over time,” she said. “Whether it be flooding, be it some malfunction at the facility, be it some releases that have to happen.”

The public-comment period on the draft permit closed Aug. 29, and opponents are asking IDEM to hold a public hearing.

As of Aug. 18, IDEM had received 19 letters regarding the permit. Both sides encouraged residents to weigh in.

IDEM permit specifications would limit the amount of suspended solids, ammonia, phosphorus, E. coli bacteria and other substances that wastewater at the plant could contain. Some restrictions match the limits of the Belmont plant, but the smaller Ben Davis Conservancy District plant would have lower limits for suspended solids than the Belmont facility.

The time it takes IDEM to approve or deny the permit will depend on how long it takes to get answers to questions raised during the public-comment period, Sneed said. 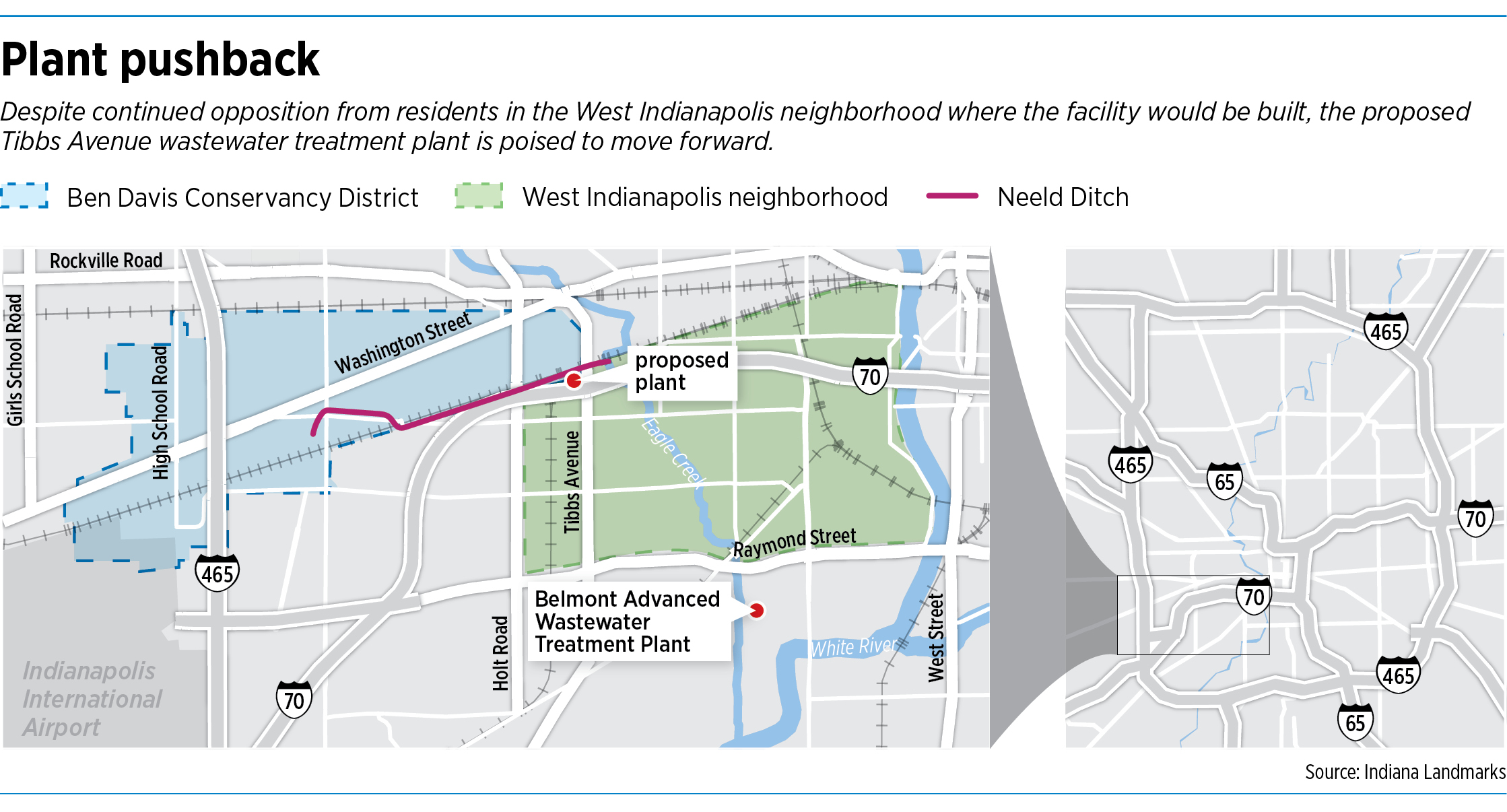 Citizens’ offer had two options: either $10 million outright, or $15 million in credit to former district customers at an estimated $22.50 per month over 15 years. The offer was declined by the district at a public meeting May 12.

Jessica Saenz, a fifth-generation resident of the West Indianapolis neighborhood and vice president of WINC, said it felt like residents in her neighborhood were ignored in the deliberations.

“Kind of the way that we see it is, we don’t want anybody to have higher rates than what they can afford,” Saenz told IBJ. “And we don’t want a sewage plant in our neighborhood. However that happens is not as important to us.”

The deal would have given conservancy district customers a lower rate while preventing the sewer plant project, Saenz said.

“That doesn’t even really sound right as it’s coming out of my mouth, because we don’t need another plant, anyway,” she said. Conservancy district residents are “already hooked to Citizens.”

The Belmont plant has a capacity of up to 300 million gallons per day and operates at about 105 million currently, Dan Considine, spokesperson for Citizens, previously told IBJ. The new plant would treat an average of 4 million gallons of wastewater a day, with a peak flow of 12 million gallons.

According to meeting documents, the conservancy board rejected Citizens’ offer because it thought it was too low. The board also disliked that the company was increasing rates and that customers wouldn’t be shareholders the way they are in the conservancy district. 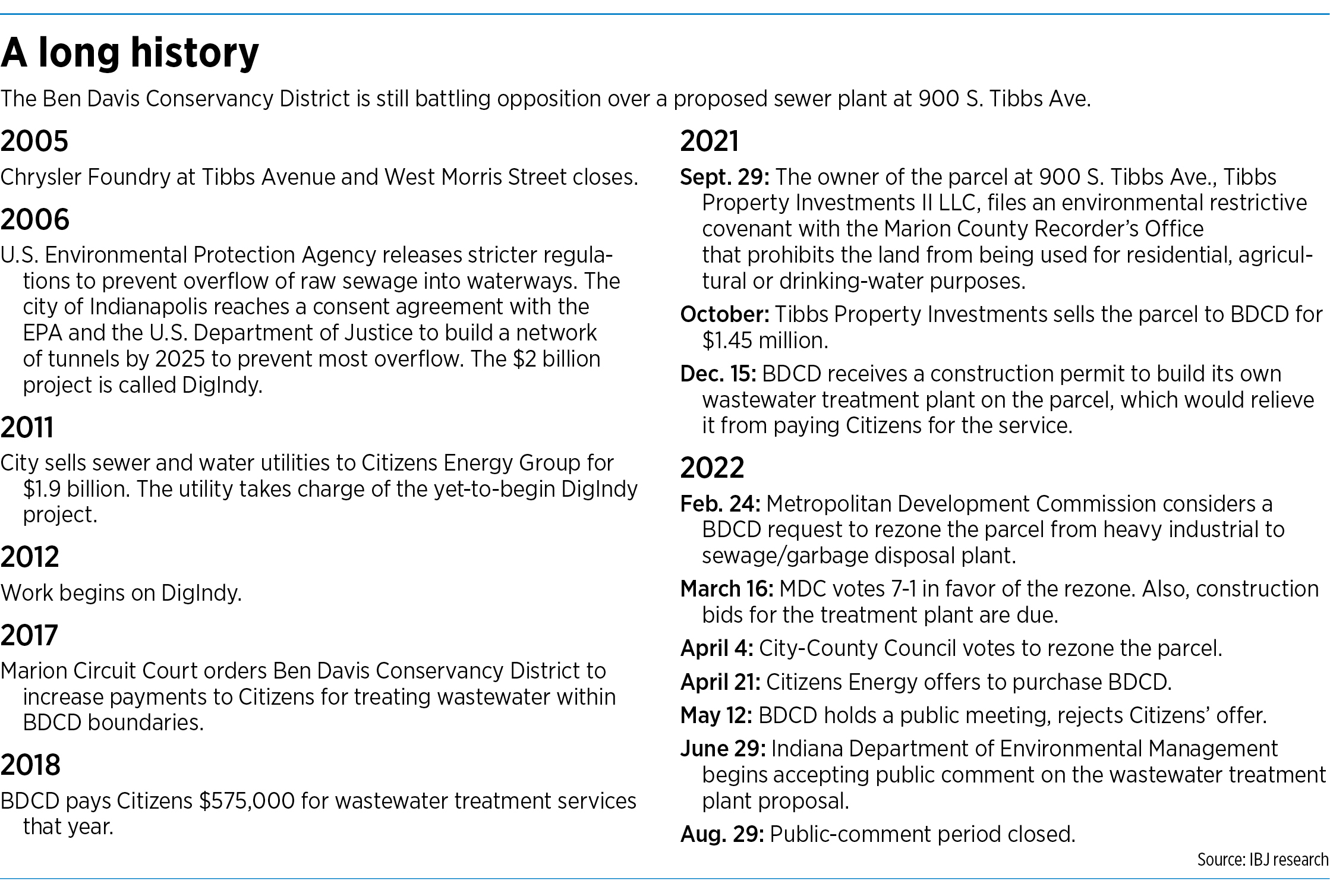 Both sides are pointing to rising costs, but they can’t seem to agree on the numbers.

To comply with a 2006 EPA consent decree that aims to reduce the amount of untreated sewer overflow into Indianapolis’ waterways, Citizens is in the process of building a 28-mile, 18-foot-diameter tunnel project, Dig Indy.

It will cost $2 billion and be completed by 2025. As of July, 17 of the project’s 28 miles had been completed; four of its six tunnels are up and running.

Citizens inherited the DigIndy project from the city of Indianapolis when it bought the city’s sewer and water utilities in 2011. The utility warned at the time that the project’s cost would necessitate rate hikes. Those hikes are the reason the conservancy wants to build its own wastewater treatment plant.

In a study commissioned by the conservancy, Citizens’ average monthly rates per household in 2026 will be $69.73, while rates with the conservancy’s own wastewater treatment plant would be $53.56.

The study said the district has 5,600 customers and that the wastewater treatment plant would be completed in 2024.

Considine said in an email to IBJ that Citizens disagrees with the conservancy district’s rate projections with a new plant.

In deliberating the offer at the May meeting of the three-member BDCD board, Hess said the Citizens purchase offer far undervalued the district and didn’t include enough information.

Critics have said the low rates projected by the conservancy district aren’t realistic.

On March 25, the district petitioned Marion Circuit Court, which has jurisdiction over it, to allow the district to increase its sale of construction bonds from $20 million to $24 million.

The district said all bids for construction exceeded the budgeted $20 million.

The district also asked for permission to double its sale of bonds for land, court documents show, from $1 million to $2 million, to purchase the $1.45 million parcel for the treatment plant from Tibbs Property Investments II LLC.

“History shows you that, over time, people are going to pay more. This is what happens, right?” Brooks said. “So, they can say, ‘Oh, well, you know, the rates are only gonna be $15.’ But five years from now, it’ll be $30, because that’s a small facility. So, with Citizens, they’re able to have revenues from their various sources. So, they can end up subsidizing it.”

The conservancy district has estimated its annual expenses for the plant at $2 million, according to documents provided to IDEM. District members’ monthly sewage rates per residential unit are currently $32, but the district can charge a household more depending on discharge volume and strength, the 2022 rate resolution says.

At a March 23 meeting, Steve Brock of financial advisory firm Therber Brock & Associates LLC said the monthly user fee will be $42 in 2023 and $52 in 2027. Brock represents the BDCD.•