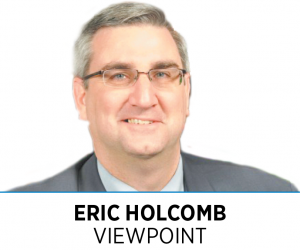 As the world watches Vladimir Putin relentlessly attack Ukraine—killing children and civilians, bombing a maternity ward, firing on a nuclear energy plant, and bombarding Mariupol and other cities—Hoosiers are sending prayers. Those include mine. But our Hoosier humanitarian efforts will extend far beyond the ongoing prayers and community vigils.

I’m traveling this week in Slovakia, and part of my mission is to visit a refugee camp with Maj. Gen. R. Dale Lyles, adjutant general of the Indiana National Guard, to learn firsthand what Hoosiers can do to help. In the meantime, I met with Ukrainian Ambassador Oksana Markarova, and she requested:

◗ humanitarian aid and supplies, such as gas and oil and first aid kits.

◗ a statement of support of Ukraine and condemnation of Russia.

◗ ceasing of Indiana investments in Russian stocks or bonds.

I shared with her that Indiana is unequivocally standing with, by and for a free Ukraine and would address each of her requests. We have already taken these steps:

◗ proceeded with divesting of more than $147 million in state government investments that have Russian interest.

◗ supported the Indiana Gaming Commission in its suspension of leagues with Russian and Belarussian ties from the approved events for sports wagering.

◗ offered to temporarily or permanently house screened and processed Ukrainian refugees should the U.S. government need a safe haven for them.

◗ asked all Hoosiers doing business in Russia to consider the moral ramifications during such a volatile time.

Indiana companies have stepped up. Eli Lilly and Co. has moved a million doses of insulin into Poland, ready to make its way into Ukraine, and halted exports of non-essential medicines to Russia. Franciscan Health hospitals have collected and sent more than 100,000 pounds of medical supplies, and Cummins indefinitely suspended the company’s commercial operations in Russia.

Our efforts alone won’t be enough, but we will contribute. Indeed, the world must be clear in words and even more so in actions. America must be a full partner in the European Union mission to impose economic and individual sanctions against Putin’s killing machine. In my opinion, Russia’s “most favored nation” status was forfeited when it invaded Ukraine and threatened nuclear and chemical war. Only four nations occupy official state-sponsored terrorism status—North Korea, Syria, Iran and Cuba. After weeks of targeting civilians, Russia should make it five.

In Putin’s last days, he must know the free world will continue to answer Ukrainian President Volodymyr Zelenskyy’s call for more humanitarian and political support. The free world must do whatever it takes for however long it takes.

And Putin must know that, for many of the same reasons the Soviet empire collapsed before, it will again, and this time on his greedy watch. He must know, this time, the world will not nod “yes” to his engulf-and-devour mentality but will applaud those courageous souls in Moscow who have taken to the streets in protest.

The good people of Russia must know that we don’t seek war but demand peace. The world must know that this is a time of choosing. Stand for the free democratic nation of Ukraine or stand against those of us who do.

If they don’t, Eastern European maps will be redrawn once again. Gone will be the days that allowed the trip like the one my grandfather took nearly 50 years ago when he visited Moscow on business and believed the Russian government loved their children, too.•

Holcomb, Republican, is the governor of Indiana.