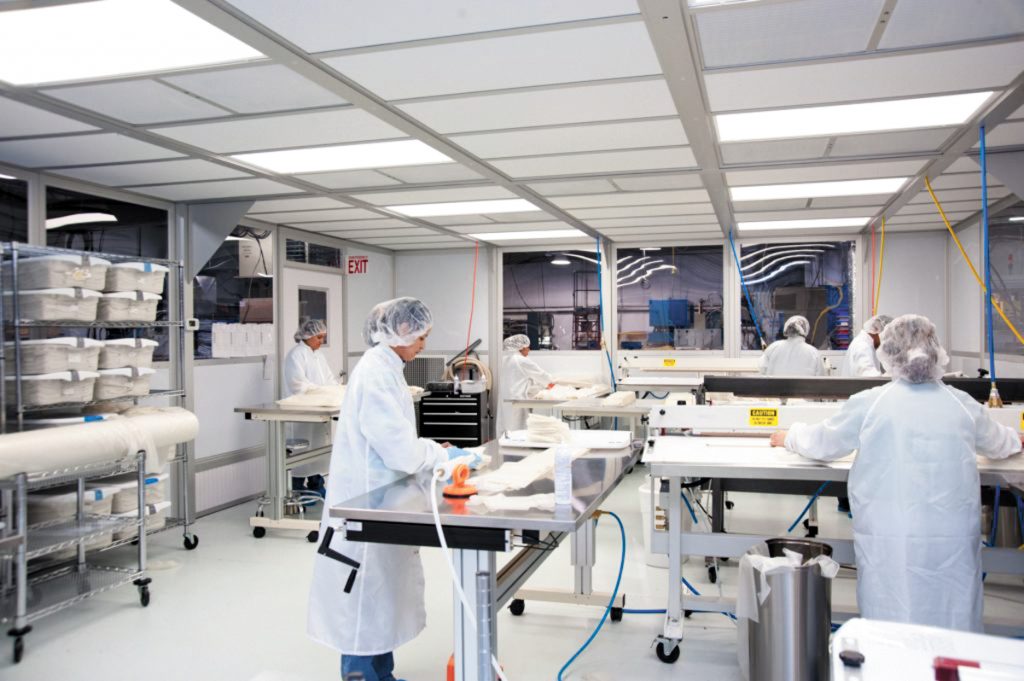 From production routines and work schedules to health screenings and visitor policies, Hoosier manufacturers say COVID-19 has forced them to rethink how they operate—and some of these changes might remain even after the pandemic recedes.

In trying to keep the coronavirus at bay, manufacturers face challenges not found in other work environments. Production employees can’t make engines or shampoo from home, for instance, and production schedules typically dictate that workers take breaks at set times.

Within this framework, employers are coming up with different ways to observe recommended social-distancing and germ-control guidelines.

“There is a lot more thought on, ‘OK, this area’s clean. How do we keep it clean?’” said Genesis CEO Tom Ryder.

Genesis has 72 employees and makes a variety of thin-film plastic products, ranging from plastic face shields and bags for medical fluids to lumbar bladders for automobile seats.

“We are running 100%,” Ryder said of his firm, which never suspended production. “We actually are even running overtime to try to keep up with demand.”

Mandatory daily temperature checks and cloth-mask usage are part of the new routine. “Everybody’s temperature is taken on the way in to work, and anybody who shows signs of this illness at work are sent home,” Ryder said.

In work areas where social distancing is impossible, the company has installed plastic partitions to protect workers.

Each workstation is supplied with sanitizing supplies and, when possible, the facility is propping open doors so employees don’t have to touch them.

“A lot of these things will stay incorporated for the long term,” Ryder said.

In Shelbyville, automotive supplier PK USA has been on a temporary shutdown since mid-March because its automotive customers have halted production at their own facilities. That means all but about 50 of the plant’s 550 employees are on layoff.

Following a deep cleaning of the entire facility, a core group of employees has been getting the plant ready for reopening as its customers begin to come back online. That’s expected to happen in early- to mid-May.

“The automakers have indicated that it will be a carefully planned production startup, and from all indications it will be a slow startup,” said Bill Kent, PK USA’s vice president of corporate relations.

First, Kent said, PK USA will bring back its leadership team to “go through the orientation for the new normal, which focuses on safety.” After that, employees will come in for their own orientation.

Employees will be adjusting to new work shifts and break times, along with random temperature checks. To avoid spreading germs, employees who used to clock in with a thumbprint reader now swipe an employee badge.

Employees who must work less than 6 feet apart from each other will be provided face shields, Kent said, and all employees are encouraged to wear either their own or company-provided face masks.

Kent called the changes “the new way of doing business” for the foreseeable future.

Andrew Penca, a supply chain leader for the engine business of Columbus-based Cummins Inc., said workers will need to get used to new processes.

“This is going to continue to be variable and uncertain, I think, for an extended period of time,” Penca said. “I suspect there will be things that will just become the new norm.”

Cummins started doing its COVID-19 planning months ago—the company has operations worldwide, including in Wuhan, China, the city where the pandemic is believed to have originated.

“We’ve been at this since early January,” Penca said. “When things started to heat up in China was when we started to dive into the work.”

Some Cummins factories never ceased production, but those in southern Indiana are on shutdown because of decreased customer demand. The company plans to resume production at those facilities May 4.

“If I go to India and I’m going to have lunch in the canteen, I’m going to be socially distant from them just as I would in southern Indiana.”

Cummins is using its in-house engineering brainpower to develop the plans, but the way social distancing is achieved will vary by location.

Before each facility reopens, industrial and manufacturing engineers study production areas to see what needs to change.

At one facility, for instance, “there were well over 150 workstations where social distancing was violated,” Penca said. “In a matter of a week they figured out how to get it down to six, and soon we’ll get it down to zero.”

In some cases, Penca said, a facility might slow down a production line so that a smaller number of employees can handle the workload.

At one plant in the United Kingdom, employees created a custom tool—a type of grabber that extends one’s arm reach—so that a two-person task could be accomplished while maintaining social distancing.

Indianapolis-based Mansfield-King, a contract manufacturer of hair care, skin care and beauty products, had a few advantages in its COVID-19 planning.

Most obviously, the company makes soap and hand sanitizer—so it has no shortage of hygiene products for its own employees’ use.

The company also had an emergency action plan that covered a variety of contingencies, and it’s been able to draw from that planning for COVID-19.

Now that it’s wrestling with the pandemic, the company is tailoring those plans as needed. For instance, it’s added a full-time nurse to take employees’ temperatures, and it’s allowing employees to self-quarantine as needed while receiving full pay.

“None of this is rocket science,” said Charles Haywood, the company’s president and owner.

“They were donating their own stores of equipment [to health care workers] and now they are lacking,” he said.

Overall, however, Burton said he believes manufacturers are well-equipped to implement COVID-19 procedures because of the federal safety standards they already must follow.

“Manufacturing is uniquely qualified in times like this because of the safety culture that has been ingrained into our industry over a number of decades,” Burton said.

But not every employer is taking the proper precautions against COVID-19, said Brett Voorhies, president of Indiana State AFL-CIO.

Voorhies said he has heard from many workers who are concerned that their workplace is not enforcing social distancing, not offering personal protective equipment or not doing temperature checks.

Voorhies said his wife works at a warehouse and is wearing a homemade mask at work. “I’ll guarantee you it’s widespread,” he said.

Voorhies said most of the complaints he’s gotten concern non-unionized workplaces. “I think a lot of our union shops are going by the rules,” he said.•