Saturday’s opening day of the first All IN Music & Arts Festival coincides with the 58th anniversary of the Beatles’ historic visit to the Indiana State Fair.

The organizers of All IN didn’t build their event on a blueprint of how the Beatles spent Sept. 3, 1964, in Indianapolis, but the new festival is using one of the venues that hosted a performance by the Fab Four: Indiana Farmers Coliseum.

After headlining an afternoon show at the coliseum, the Beatles played an evening show at the Hoosier Lottery Grandstand.

Steve Sybesma, one of four founding partners of All IN, was a teenager when he caught the night show for free by peeking through a fence near the grandstand.

Dave Lucas, another founding partner of All IN, organized the first concert of his career at the Coliseum: an Issac Hayes show on Nov. 23, 1971.

One of the biggest shows in Sunshine Promotions history featured John Mellencamp playing for 50,000 attendees in 1988 at the infield of the Indiana State Fairgrounds racetrack.

Sybesma views the fairgrounds as a logical site for a music festival, and he’s eager to create more concert history with All IN.

“I’m surprised someone hasn’t done it already, because it’s just a great facility—centrally located—and we can grow the festival there,” he said.

All IN’s biggest names—Cage the Elephant, Daryl Hall & John Oates and John Fogerty—will perform on a stage built on the fairgrounds’ Main Street outside the coliseum on Saturday and Sunday. Death Cab for Cutie and Dawes are two bands slated to play the coliseum.

On Wednesday afternoon, the festival scrapped plans to use the grandstand as the site for the event’s main stage.

“After walking the grounds and visualizing the all-new festival experience, festival creators and their operations team have decided to update the footprint and bring more music along Main Street, by moving the [grandstand stage] to a new location along the main drag of the state fairgrounds,” organizers said in a statement. “This upgrade will improve the event flow and guest experience.”

The grandstand and coliseum are familiar settings, but not obvious ones.

No concerts have been presented at the grandstand since a stage-rigging collapse caused seven deaths and 58 injuries at the 2011 Indiana State Fair.

And the coliseum is an indoor venue, an exceedingly rare format in the realm of summer concert festivals.

After a gust of wind toppled audio speakers, a video screen, metal scaffolding and a roof tarp in the time between the performances of supporting act Sara Bareilles and headlining country-pop duo Sugarland at the 2011 fair, the Indiana State Fair Commission stopped presenting fair concerts at the grandstand.

The fair continues to use the venue for events such as marching band and cheerleading competitions, rodeos, harness racing and demolition derbies.

Concerts during the fair are now presented at the Hoosier Lottery Free Stage, where Chaka Khan, Kansas and Pat Benatar & Neil Giraldo were high-profile performers this year.

Anna Whelchel, the state fair commission’s chief marketing and sales officer, said the All IN festival is a rental event among more than 400 similar attractions each year at the fairgrounds. It is not organized by the commission.

“The Indiana State Fair Commission has no current plans at this time to bring state fair event concerts back to the grandstand location, as our Hoosier Lottery Free Stage has proven to be an attractive location for fair guests,” Whelchel said in a statement.

Before All IN decided to not use the grandstand, Sybesma noted that the concrete slab used as the stage during past grandstand concerts no longer exists at the site. He also said 2011’s tragedy didn’t affect planning for All IN.

“It wasn’t a hurdle,” Sybesma said. “It was mentioned, but [the Indiana State Fair Commission] has done a lot of events there since then. They completely removed the old stage, and we’re bringing in a festival stage. It’s just like putting a stage out in the middle of a field.”

Although attendees have the option of camping overnight at All IN, the festival might be the least rustic of any multi-day, multi-stage event in the United States.

An abundance of permanent bathrooms are available to attendees, and the coliseum includes thousands of fixed seats.

The coliseum’s capacity for basketball games is 6,800. The All IN organizers have said they will sell no more than 12,500 tickets for each day of the festival.

As an indoor arena, the coliseum is unlike anything found at Coachella, Lollapalooza or Bonnaroo, popular summer festivals in other parts of the country.

Paul Peck, one of All IN’s founding partners who worked on early editions of Bonnaroo in rural Tennessee, said the coliseum’s contained environment is a plus.

“Everyone thinks about these music events as being all outdoor stages,” Peck said. “But we have this indoor, true rock arena environment where we can do cool stuff with lights and people can get out of the sun. It’s going to be a signature part of this festival.”

Sybesma and Peck were co-founders of Florida’s Okeechobee Music & Arts Festival, which debuted in 2016. They exited their roles at that festival after the first year.

“Steve and I have had these experiences producing events where we’re literally building something in the middle of nowhere, and we’re asking people to travel three hours and live there and camp out,” Peck said.

The fourth All IN founding partner is Indianapolis native Kevin Browning, who co-manages Umphrey’s McGee, a popular jam band founded in South Bend.

On the topic of Indiana musicians, one All IN stage will be devoted to Hoosier talent. The Indiana Stage will be near the east end of the fairgrounds’ Main Street.

Doug Henthorn, who released an album titled “Three” in May, will perform Saturday at the Indiana Stage after Daryl Hall & John Oates wrap up their appearance.

“I would like to think there’s going to be a lot of foot traffic and a lot of people meandering around,” Henthorn said. “Hopefully, some people who aren’t familiar with me will become familiar.”

When the bygone event Rib America Fest was presented at Military Park in White River State Park, Henthorn’s old band, Healing Sixes, was a fixture of the food-and-music festival.

Henthorn said he’s looking forward to All IN as a setting where no one is expecting a performance filled with cover songs.

“I’m always excited when there’s any kind of opportunity where I can play original music,” he said. 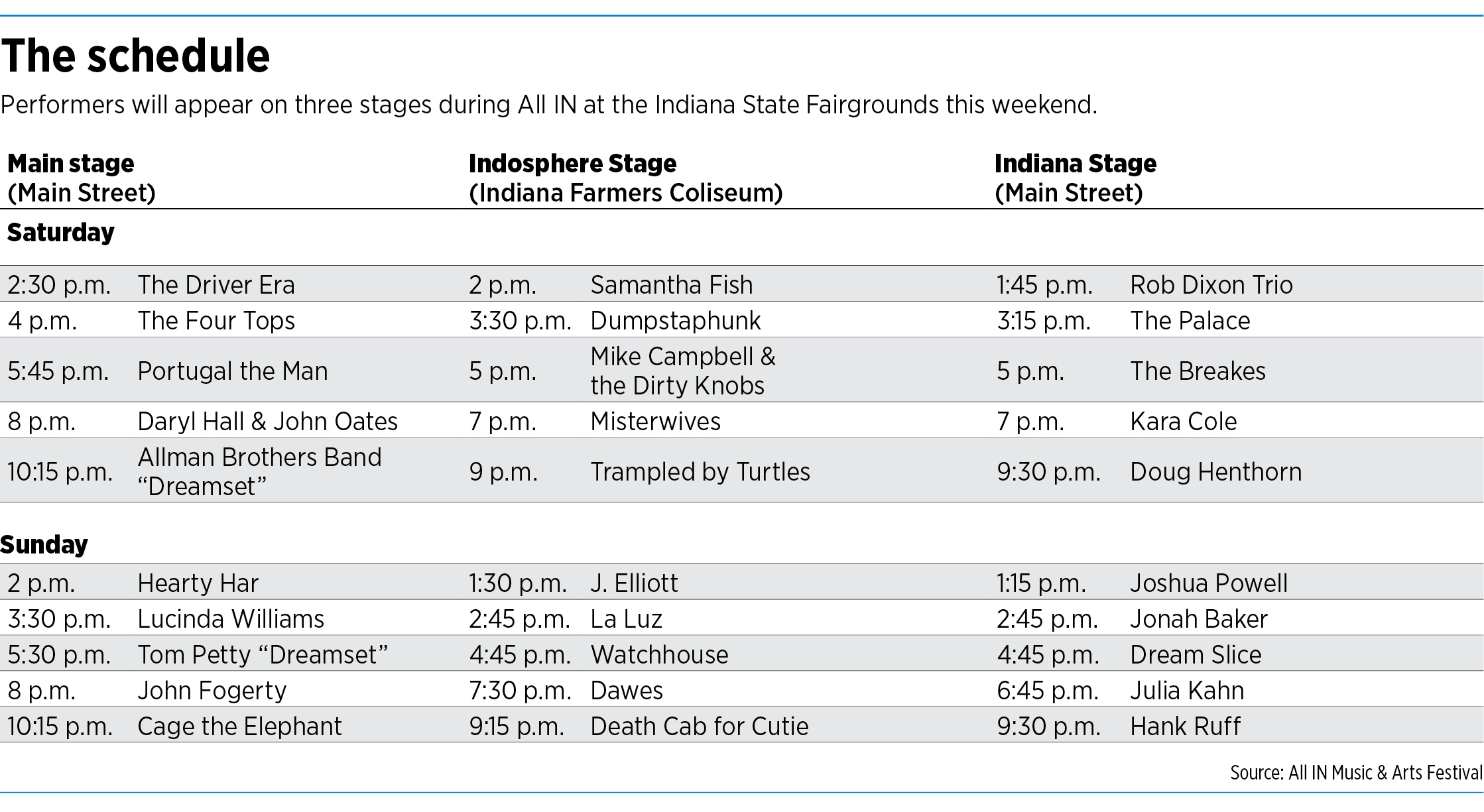 Twenty summers ago, Peck helped launch Bonnaroo, and he organized the first all-star “SuperJam” at the famed festival.

For All IN, Connecticut native Peck devised “Dreamsets,” in which musicians from different bands, genres and eras come together for one-night-only collaborations.

◗ Chuck Leavell, keyboard player who tours with the Rolling Stones. He also toured with the Allman Brothers Band and played keyboards on the 1973 studio recording of “Ramblin’ Man.”

◗ Samantha Fish, vocalist-guitarist who’s also playing her own All IN set Saturday.

◗ Dawes, a band that’s playing its own All IN set Sunday.

◗ Matt Shultz, vocalist who also will appear with his band, Cage the Elephant, on Sunday.

◗ John Oates, who’s sticking around All IN for an extra day.

◗ Jenny Lewis, solo artist who shared a bill with Ani DiFranco Aug. 5 at Rock the Ruins in Holliday Park.

◗ Ivan Neville, vocalist-keyboard player who also will appear with his band, Dumpstaphunk, on Saturday.

At the 2013 edition of Bonnaroo, Oates and My Morning Jacket vocalist-guitarist Jim James led a “SuperJam” focused on songs originally recorded by John Lennon and Sly & the Family Stone. (Carl Broemel, an Indianapolis native who plays guitar in My Morning Jacket, participated in the show.)

“It’s what you go to festivals for,” Peck said. “You get to these experiences where you say, ‘I didn’t expect this to happen.’”•