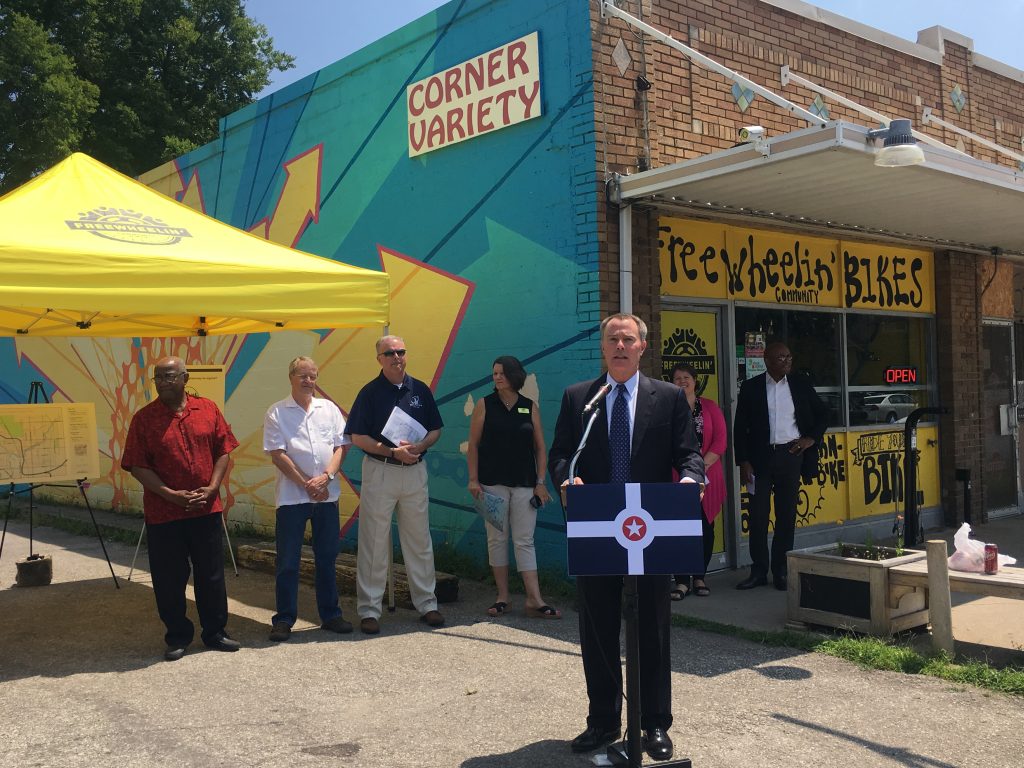 Mayor Joe Hogsett and the Department of Public Works on Thursday announced a plan to spend about $450,000 that has been collected by scooter companies since last year on the improvements. The companies are responsible for contributing $1 per scooter per day to a multimodal infrastructure fund. The goal is to create more so-called “neighborways” in Indianapolis.

Neighborways are low-volume streets that are optimized for bicycle travel through pavement markings, signage, intersection-crossing treatments and other traffic-calming methods.

“This expansion allows more residents who want or need to travel by bike to do so,” Hogsett said in a written statement, “which means a healthier lifestyle, less pollution, and fewer cars on overstressed roads. Expanding bike connectivity is a win for us all.”

The neighborways will connect dedicated bike lanes and trails. There will be signage directing bicyclists and others to travel on roads with low vehicular traffic where they can more safely connect to the next bike lane or trail. Roads will receive warning markings or signs to alert drivers that they’re sharing the road with bikes.

“It’s to fill in the gap,” said DPW director Dan Parker. “We’ve got to connect them together.”

An unspecified amount from the fund will be spent to help expand Freewheelin’ Community Bikes, Bike Indianapolis and Biker Boyz & Girlz Shop, three groups that provide bicycles and bike education to children and young adults.

The proposal was cheered by attendees at the mayor’s event, including Alison Cole of Freewheelin’ Community Bikes, who said the neighborways would provide the “missing link to a bike network we want our kids to be able to enjoy.”

However, the proposal received some initial criticism online from the bicyclist community. At least three Twitter users said they were “underwhelmed” with the plan.

“I am dearly hoping the scooter revenue is not simply going to sharrows (shared-lane markings) in lieu of dedicated infrastructure,” posted Indianapolis bicyclist Jeffery Tompkins. “If Indy is honest about encouraging bicycling and other micro-mobility options, then it requires more than sharrows. Hopefully, there is more to come in way of details.”

“The city has more than enough [right of way] on most streets for some real bike infrastructure, but we might have to relinquish some asphalt,” Kastner posted.  “This, unfortunately, is not that.”