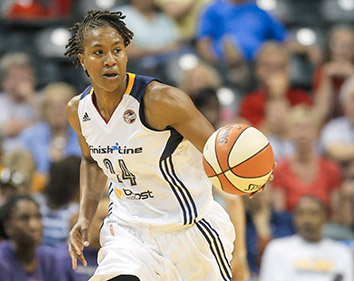 Tamika Catchings, a 10-time WNBA All-Star for the Indiana Fever and four-time Olympic gold medalist, will be enshrined in the Naismith Memorial Basketball Hall of Fame’s Class of 2020 after being elected in her first year of eligibility.

Catchings, 40, enters the Hall with an impressive roster of NBA stars who also recently retired, including Tim Duncan, Kevin Garnett and the late Kobe Bryant. The three NBA players have a combined 11 championships and 48 All-Star seasons between them, and all were first-time finalists this year for the Hall.

“I am incredibly honored to be included in this year’s Naismith Hall of Fame, and God only knows the dreams I had as a little girl to be able to follow in my father’s footsteps. I am so thankful to stand alongside so many amazing men and women that have come before me,” Catchings said.

The inductees were announced noon Saturday on ESPN. The Basketball Hall of Fame typically reveals its annual selections at college basketball’s Final Four, but the NCAA men’s basketball championship has been canceled this year due to the global coronavirus pandemic.

Catchings spent her entire 15-year professional career with the Indiana Fever and led the team to its lone title in 2012. She retired after the 2016 season. In her career, she averaged 16.1 points, 7.3 rebounds, 3.3 assists and 2.4 steals per game.

Catchings led Tennessee to an NCAA championship in 1998. She also was a five-time winner of the WNBA defensive player of the year award.

Catchings, 40, currently is the Fever’s vice president of basketball operations and general manager. The franchise is managed by Indianapolis-based Pacers Sports & Entertainment.

“Tamika is a Hall of Famer in every sense of the word, someone whose success on the court and generosity off it have made her such an important figure in our sport. She is what young players aspire to be,” said Herb Simon, CEO of PS&E.

The Basketball Hall of Fame has a three-year waiting period from the end of a player’s career for induction consideration.

The induction ceremony in Springfield, Massachusetts is still set to take place on Aug. 29. If the coronavirus pandemic forces that to be delayed, there is an alternate plan for a ceremony to happen in October.