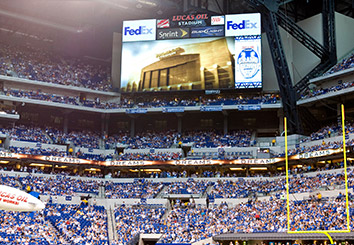 Forbes estimates the Dallas Cowboys are the NFL’s most valuable franchise, with a value of $5.7 billion, the 14th consecutive year they’ve held that distinction.

The Indianapolis Colts are ranked 2oth on this year’s Forbes list out of 32 NFL teams, with a value of $2.85 billion, up 8% from a year ago. The magazine said the Colts have operating income of $67 million.

According to Forbes, the Jerry Jones-owned Cowboys are the most valuable sports franchise in the world.

After the Cowboys, the six-time Super Bowl champion New England Patriots are second in the league, at $4.4 billion, followed by the New York Giants at $4.3 billion, the Los Angeles Rams at $4 billion and the San Francisco 49ers at $3.8 billion.

The teams with the biggest jumps from last year include the Jets, Eagles and Seahawks, all at 11%.

The bottom three teams are the Detroit Lions ($2.1 billion) at No. 30, followed by the Buffalo Bills ($2.05 billion) and the Cincinnati Bengals, who finished last in the standings at 2-14 in 2019 and are worth $2 billion. They are also the only franchise without any increase from last year.

On average, each team in the NFL is worth $3.05 billion, an increase of 7% from last year. And four teams (Cowboys, Giants, Patriots and Rams) are worth at least $4 billion.

The Super Bowl champion Kansas City Chiefs are No. 23 at $2.5 billion, an increase of 9% from last year.