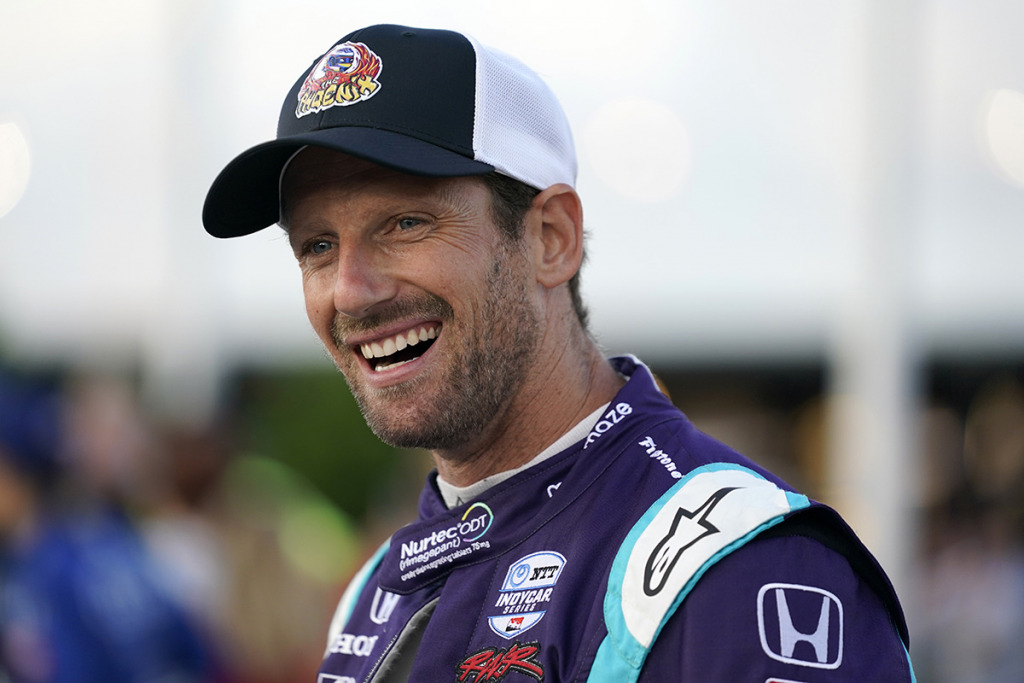 Romain Grosjean (51) smiles before the start an IndyCar auto race at World Wide Technology Raceway on Saturday, Aug. 21, 2021, in Madison, Ill. Grosjean will move to Andretti Autosport next season and drive the full 17-race schedule, including the Indianapolis 500. (AP Photo/Jeff Roberson, File)

The love affair between Romain Grosjean and IndyCar will continue for another two years. The Frenchman will move to Andretti Autosport in 2022 under a two-year contract announced Friday that includes the Indianapolis 500.

Grosjean did not commit to ovals when he left Formula One to drive for Dale Coyne Racing in IndyCar. He suffered serious burns in a season-ending F1 crash last November and didn’t want to put his family through watching him race the most dangerous discipline in IndyCar.

But this first season has been so wonderful to Grosjean, who spent a month traveling the country in a motorhome with his wife and three children, that his family is now fully committed. They will move to Miami next year for a French school he found for his children, a short flight to his new Indianapolis-based race team and a direct flight for his wife to commute to her job in Paris.

“Is it for two years? Is it for five years? Is it forever? I have no idea,” Grosjean said. “But we’re coming and we’re ready to discover something new for the family and that’s a super exciting new chapter in our life. We asked the kids what they are going to miss in Switzerland and they said, ‘Nothing.'”

Grosjean will drive the No. 28 sponsored by DHL and replace Ryan Hunter-Reay, the former IndyCar Series champion and Indianapolis 500 winner who was not retained after 12 seasons with Andretti. The move had been expected since July when Grosjean first showed interest in testing an oval; the hiring wasn’t confirmed until Friday at the Grand Prix of Long Beach, the final event of the year.

Grosjean, who tried his first oval in August by racing at Gateway outside St. Louis, will make his Indianapolis Motor Speedway oval debut during the Oct. 8 test day.

Grosjean’s nine-year F1 career was coming to an end before his crash in Bahrain last November. He missed the final two races of the F1 season after walking through the fiery wreckage but was already well on his way to exploring opportunities in IndyCar before the crash.

When he got a plan in place with Coyne, the team owner wanted him in the U.S. in January for his first test — impossible because Grosjean’s hands were still healing.

“He gave me the opportunity of coming in IndyCar and race without even knowing if my left hand was able to hold a steering wheel or not. He gave me the chance and said ‘Let’s try,'” Grosjean said.

He said Coyne didn’t panic when Grosjean couldn’t drive in January and although he admitted it was a “tough” call to inform Coyne he was moving on.

“I think for everyone that wants to start in IndyCar, it’s just a perfect place because the team is a big family. You feel good. The boys will give you everything you need to have a good car,” he said. “You probably don’t feel the pressure you can feel in a top team because the top team you probably need to deliver, whereas with Dale Coyne you go with the flow.”

Indeed, Grosjean scored his first career pole in his third race, the road course at Indianapolis, where he finished second.

He’s since added podiums in his return to Indianapolis and last week at Laguna Seca, where the crowd during the celebration gave him a standing ovation that nearly brought Grosjean to tears.

It has marked a renewal for Grosjean, who has nicknamed himself “The Phoenix” because he walked out of the fire in Bahrain and not only survived but has settled into a far more enjoyable second career.

He simply loves driving an Indy car and the atmosphere of the series.

“It’s the freedom of driving the car the way you like to drive it,” Grosjean said. “The ability to enjoy every single lap that we do, enjoy the fact that you can be competitive in any team, makes it that with the atmosphere in the paddock, obviously with the support of the fans, been just the whole package that I’ve enjoyed a lot.”

Grosjean will land with one of top teams following its split with Hunter-Reay, who won both the IndyCar championship and the Indy 500 driving for Andretti. The American turns 41 in December and last won a race in 2019.

Andretti said Friday that Hunter-Reay knew at the start of this season that it would be his final year with the organization. Hunter-Reay is 16th in the standings without a podium finish and only four laps led, but has been lauded by his Andretti teammates.

“Ryan is someone, he doesn’t complain about things often, right? When he does bring something to the table in terms of constructive criticism or areas something needs to improve, because he doesn’t cry wolf very often, it’s very direct and people listen, people take notice,” Alexander Rossi said. “I think that for 15-plus years that has had a huge influence on the team.

“In terms of being a team leader outside the track, things not necessarily having to do with making a car go fast, I think he kind of led by example from that standpoint,” Rossi continued. “It’s been a big privilege to work with him.”

Andretti still has former Indy 500 winner Rossi under contract, as well as Colton Herta, the winner last week in Laguna Seca. James Hinchcliffe is expected to be replaced by an Indy Lights driver next season.

Team owner Michael Andretti on Friday was focused on the addition of Grosjean, who will bring his Indianapolis-based engineer with him from Dale Coyne Racing. Olivier Boisson, like Grosjean, is French.

“Even when the teams where he was not in a competitive situation, I could always see that he was giving it 110%. No matter what the situation was, and that’s my type of driver,” said Michael Andretti. “I was very anxious to see how he would adapt with the (Indy) cars and he did exactly what I thought he would do.”

This will be the 12th season of partnership between Andretti and DHL, which will have a new driver in its yellow No. 28 for the first time in 11 years.