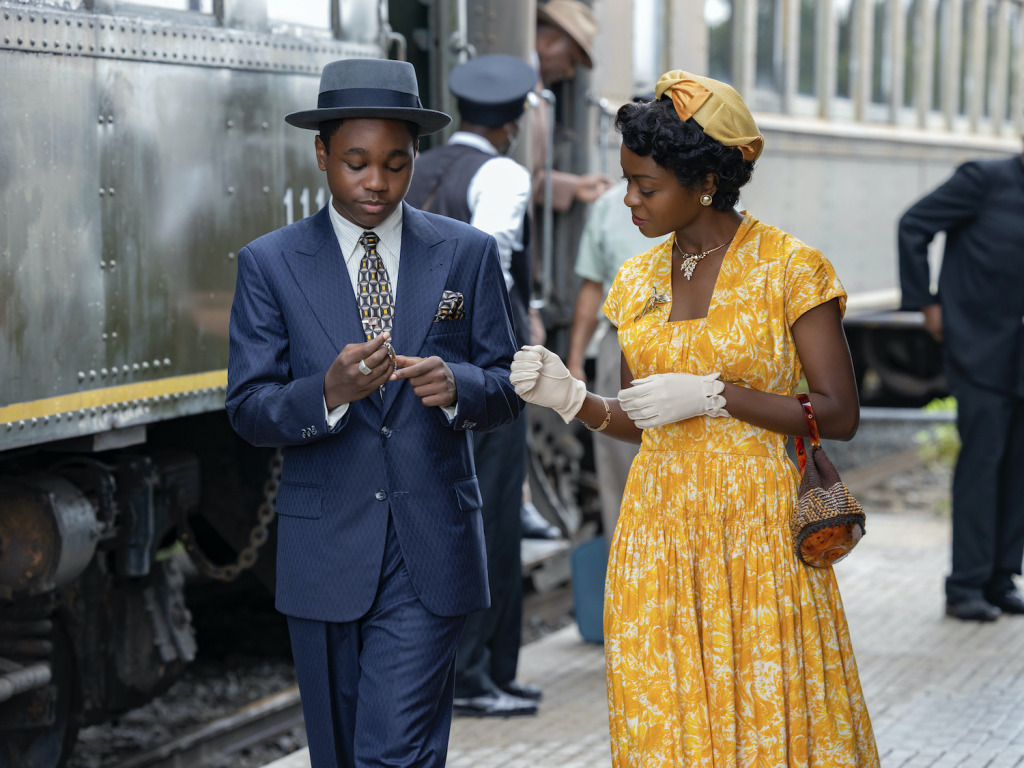 Jalyn Hall, left, portrays Emmett Till and Danielle Deadwyler portrays Mamie Till Mobley in “Till,” a film that will be presented Oct. 10 at Glendale Landmark Theater 10. (Photo provided by Orion Pictures)

With a recent track record of presenting movies that go on to collect trophies at the Academy Awards and other Hollywood ceremonies, organizers of the Indianapolis-based Heartland International Film Festival knew they had a shot to land “The Whale” for this year’s event.

Starring Indianapolis native Brendan Fraser in the role of a father attempting to mend a relationship with his 17-year-old daughter, “The Whale” premiered Sept. 4 at the Venice International Film Festival. The movie directed by Darren Aronofsky (whose credits include “Black Swan” and “The Wrestler”) will be released Dec. 9 in the United States.

Greg Sorvig, artistic director for Heartland Film, said Fraser is a lock to receive an Oscar nomination in the category of best actor.

“A comeback film role is one thing, but a starring role in an Aronofsky film sounded extremely compelling,” Sorvig said. “We were able to see the film early and were deeply moved by the performance and film, and knew that this film and its closing scene were meant to be the closing film and scene of the 31st Heartland International Film Festival.”

Heartland succeeded in scheduling a festival screening of “The Whale.” On Oct. 16, more than 500 movie fans will pack Newfields’ Toby Theater for a sold-out presentation of the film.

The Heartland festival, scheduled Oct. 6-16, continues to build its reputation for locking in screenings with studios looking to generate buzz for prestige titles before official release dates and awards season ramps up from November until March.

In addition to “The Whale,” this year’s festival will present the documentary “Louis Armstrong’s Black & Blues” and historical drama “Till.” Sally Hawkins stars in “The Lost King,” while Harry Styles stars in “My Policeman.”

If you’re interested in how nominations for the Academy Awards might shape up, the place to go for predictions is entertainment website goldderby.com. Remarkably, four of the top 10 movies Gold Derby likes for Best Picture consideration will be presented at Heartland: “The Whale,” “Women Talking,” “The Banshees of Inisherin” and “Empire of Light.”

For much of Heartland’s history, a wholesome image was associated with the festival, undoubtedly forged when 1992’s inaugural event showcased a restored version of “Snow White and the Seven Dwarfs.” And Heartland continues to give out Truly Moving Picture Awards to “impactful films that do more than entertain.”

Sorvig mentioned the 2015 opening-night presentation of “Room” as a turning point for Heartland as a festival where movies play while on course for industry acclaim. A few months later, “Room” star Brie Larson won the best actress Oscar.

“It’s almost a snowball effect,” Sorvig said. “After you get one or two titles, you can use those as leverage to move forward.”

Sorvig said attending larger festivals is one way to build relationships with studios.

“When you meet somebody in person, it’s a little bit different, especially throughout the pandemic,” he said. “It’s almost like you get to meet people all over again, and I relish that opportunity.”

Before the biggest films come to Heartland, the movies typically have premiered at top-tier festivals such as Venice, Cannes or Toronto.

“Not a lot of programmers go to Telluride, which is right before Toronto,” Sorvig said. “I feel like Telluride is a lot more intimate and it almost has a Midwest regional film festival vibe, but with big stars and studio representatives just walking around.”

“Michael Ault, our president, has been supportive of that relationship,” Sorvig said. “It’s not unusual for programmers to dip their toes in a couple of different festivals or events.”

Meanwhile, Heartland has a formal connection with the Academy Awards. The organization’s Indy Shorts International Film Festival is a qualifying festival for the Oscars in the categories of live action, documentary and animated films that run no longer than 40 minutes.

Beyond the full-length features being considered for Oscar accolades, this year’s Heartland festival will feature dozens of independent movies.

Heartland also is gathering momentum as a place where industry deals are made. In 2020 and 2021, MTV Documentary Films acquired Heartland films “76 Days” and “Art & Krimes by Krimes,” respectively.

“Indie filmmakers take great pride in their stories being featured alongside the likes of ‘The Whale,’ ‘Empire of Light’ and other huge studio tent poles with buzz,” Sorvig said. “We want to be a resource to filmmakers at any level, and that also includes networking and a chance at finding distribution for their titles.”