Commissioners must approve exterior elements of the revamp, because the fieldhouse is located in downtown’s historic Wholesale District. And among their most pointed critiques were concerns about how the more contemporary design of a plaza and mezzanine area planned north of the arena’s footprint failed to mesh with the old-school fieldhouse vibe and the rest of the district.

They also shared concerns about how well the design of the plaza area engages passersby.

The feedback was offered during a presentation to the commission by a representative of Populous, the architecture firm hired for the project. The formal approval process is expected to unfold in  coming months before renovations begin next year.

The presentation, given by project architect Adam Stover, rehashed some details previously reported by the IBJ, including plans to demolish a parking garage to make way for a new plaza area.

The renovations will create a new Hall of Fame area in a mezzanine level above the outdoor plaza planned north of the fieldhouse proper.

The plaza will include a 12-foot-deep sunken area near its center. The sunken area will feature oversized steps, where people will be able to sit, along with an ADA-compliant ramp. The space is expected to house a basketball court during the summer months and an ice rink in the winter.

(See preliminary renderings for the whole project below) 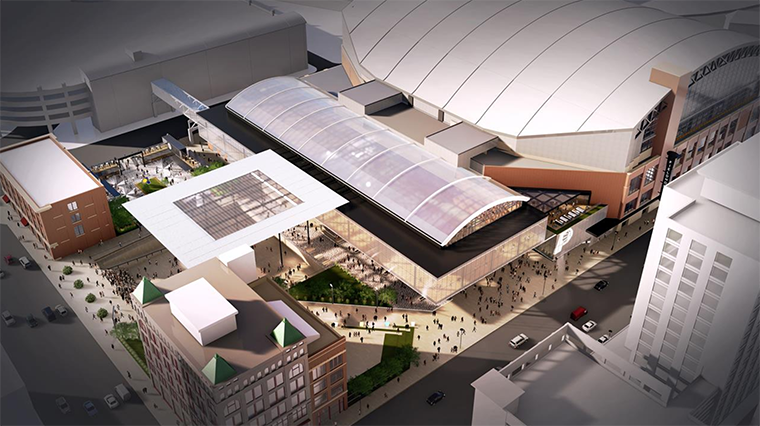 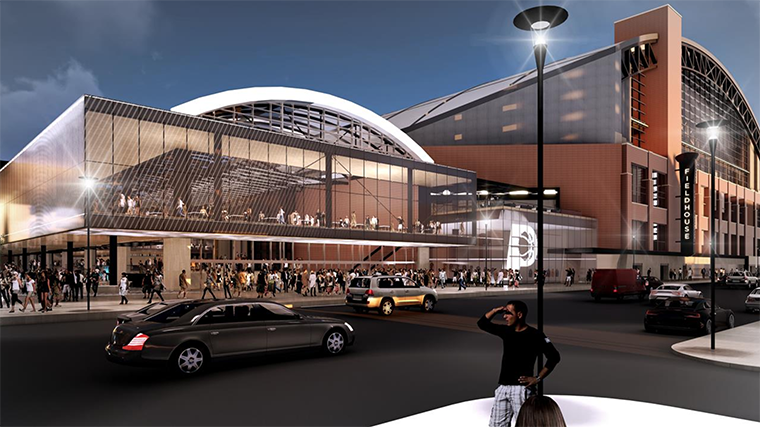 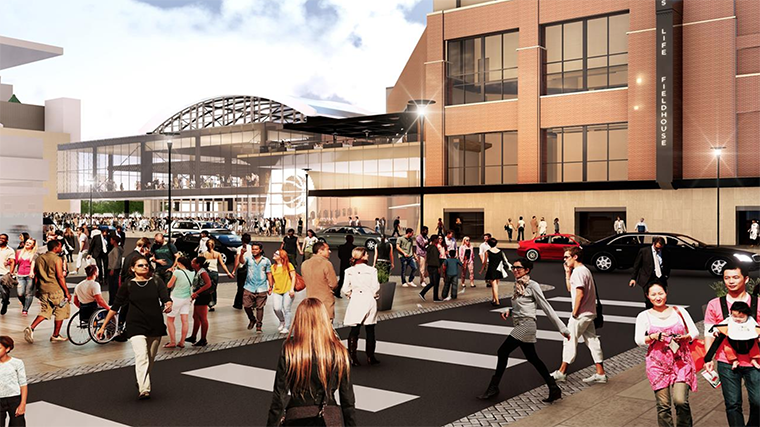 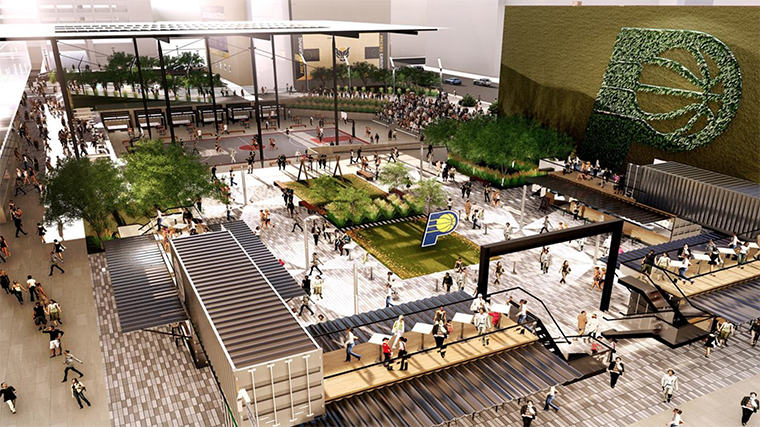 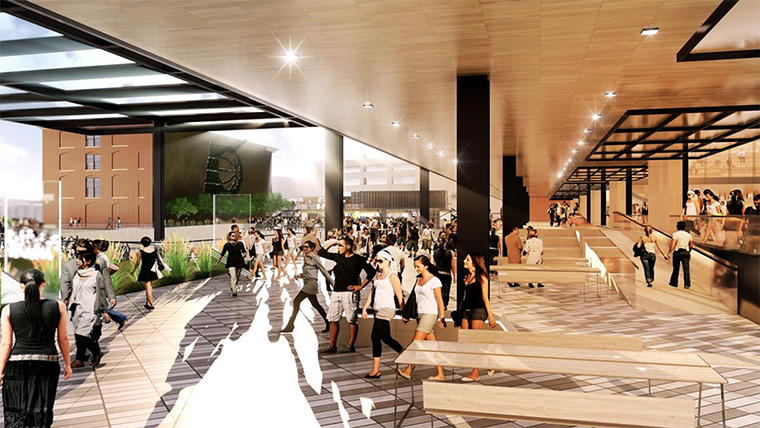 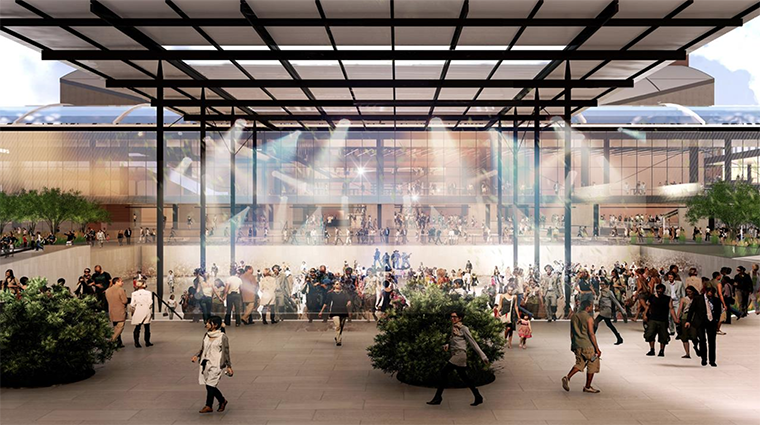 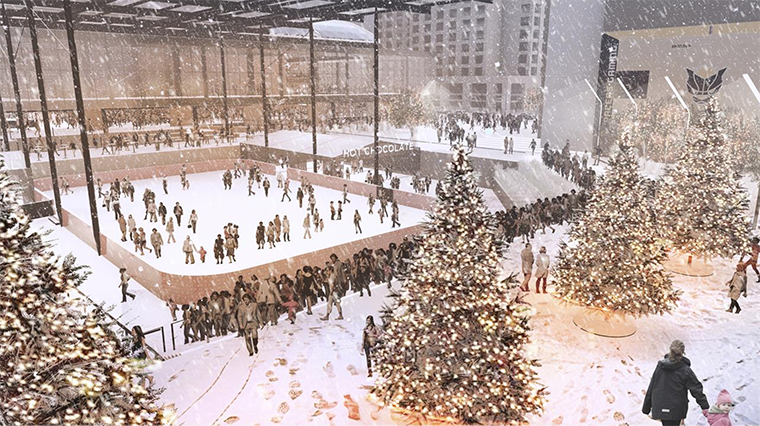 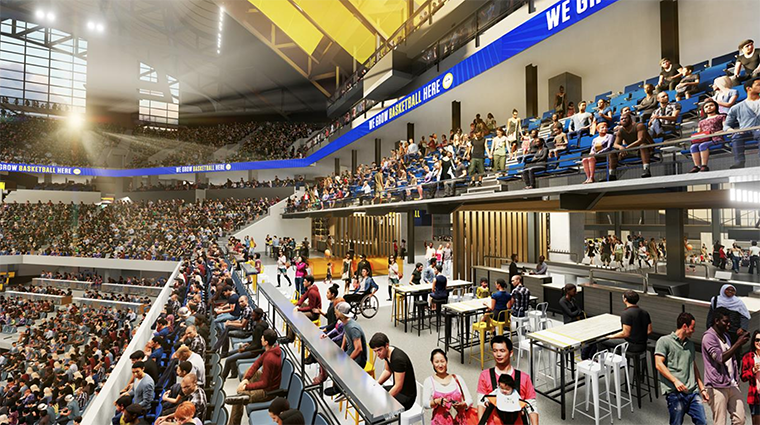 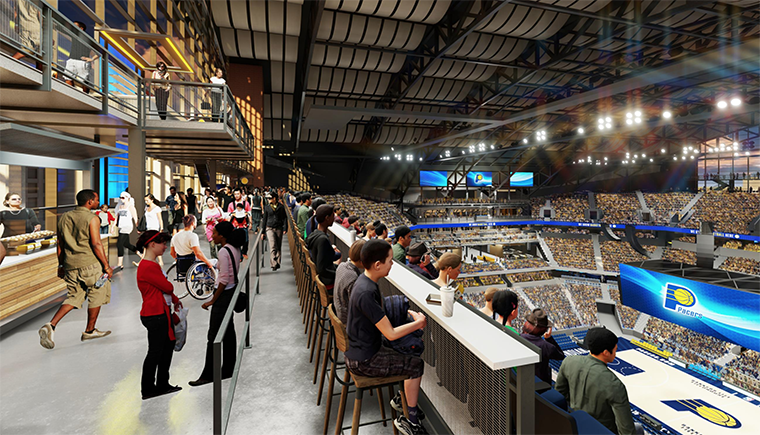 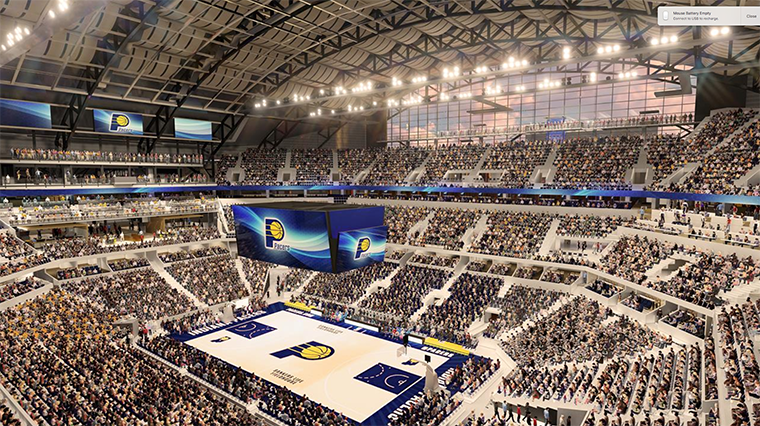 Renovations to the 20-year-old arena are part of a sweeping deal between Pacers Sports & Entertainment and the Capital Improvement Board to keep the franchise in Indianapolis for at least 25 years. PS&E also manages the 18,500-seat venue for the city year-round.

The CIB, which owns the fieldhouse, has agreed to contribute $800 million for fieldhouse upgrades and subsidy payments to PS&E. It will pay for a bulk of improvements to the fieldhouse—about $270 million—while the city is expected to kick in $25 million and PS&E contributes $65 million.

The presentation to the IHPC gave Populous, the CIB and the Pacers an opportunity to take the feedback and fine-tune their proposals before formal hearings on the project.

While most of the commission members said they were pleased with the plans presented—although details for part of the plaza area were withheld because they’re being modified—many offered questions and challenges to Populous they hoped would be addressed in later designs.

Commission president Bill Browne, founder of Ratio Architects, was required to recuse himself from the matter due to the firm’s proximity to the fieldhouse. It sits about 200 feet away at 101 S. Pennsylvania St.

In order to build the plaza, the Pacers will have to demolish a 770-space parking garage fronting Maryland Street. Plans call for razing the parking garage after the fieldhouse hosts the NBA All-Star Game in 2021.

Board member Sally Cook said while she liked the concept of the plaza to replace the garage, she was concerned about its practicality.

“I like the idea of getting rid of a parking garage in favor of a more welcoming, activated space, but I’m wondering if you’re going to encounter opposition from people who park there,” she said.

The structure, while not generally full during the workday, is often at capacity during Pacers home games. Local office brokers have previously told IBJ that losing the garage “will be an issue” moving forward, particularly given a tight market for downtown parking.

Cook asked Stover and the design team to be prepared to provide data about the garage’s regular usage when they returned for a formal hearing.

The proposed roof for the plaza is expected to be about 33 feet from ground level—45 feet from the sunken portion of the pavilion—and will include a mix of opaque and transparent materials.

But the canopy will also sit far back from the new frontage created along Maryland Street with the demolition of the parking garage. The location of the massive awning raised the eyebrows of some commission members.

Board vice president Bruce Stauffer said he didn’t understand the location of the canopy, particularly given the size of the overall project, which is about 1.5 acres.

Stauffer challenged the design team to consider moving the canopy closer to the roadway, or adding other elements that help draw people in.

Board treasurer Alex White also said he felt the design of the project would be improved by moving or extending the canopy toward Maryland Street.

“I feel like the opportunity here—particularly with this being a CIB project—is to really think broader, stronger about your notion of the landscape and the overall quality of the (project),” he said.

White and Stauffer weren’t the only ones who raised questions about the possibilities of improved street activation.

Joann Green said she would like to see more trees, or a pseudo extension of the Cultural Trail, run along Pennsylvania Street, west of the plaza area.

She said adding trees would be beneficial to those walking by to give it a more welcoming feel and a “more pedestrian, soft experience,” while also encouraging sustainable environments. However, she noted planned heated sidewalks and other utilities could stymie those efforts.

White added the combination of lack of streetscaping and the proposed mezzanine area is more geared toward the Pacers than toward fans, and challenged Populous to explore more effective ways to engage fans beyond a cut-through going from Delaware to Pennsylvania Streets.

James Kienle also said he would like to see more “definition along the street edge” that helps attract visitors and passersby.

Kienle and others also suggested the Pacers avoid using the plaza area as an opportunity to add permanent digital signage—something Stover indicated the franchise is not considering for the area at this point.

“I think it would mess up the integrity of the overall concept and design,” Kienle said, adding he does not believe digital signage would enhance the experience for people using the plaza.

He asked for more detailed information about how digital billboards and other signage elements would be utilized at the plaza in any future presentations.

Stauffer said he would like to see updates to the design to better incorporate the planned retail store and terrace level into the rest of the concept, indicating he believes the current design is slightly confusing.

White said he felt the architecture, still in its early stages, “seems super cheap right now,” indicating he believed some of the arena’s character was lost to the design.

“It seems the architecture you’re proposing really does little to harmonize or feed off of that,” he said. “(I know) you’re trying to be more distinct, but I just feel like there’s a rhythm and a structure to the Bankers Life architecture … and I didn’t get a great sense of it here.”

Another board member, Kevin Charles Murray, plainly stated he didn’t like the concept—particularly since the proposed design moves away from the aesthetic found in downtown’s Wholesale District to a more modern appearance. He said the new design felt like the building “could be located anywhere.”

“(It’s) really unfortunate,” he said. “For me it’s too contemporary and out of place, but that’s just my opinion.”

Most of the board members, however, praised Populous for its work, including Stauffer, Green, Susan Williams and Anne Lear.

“I found this to be a very exciting concept, though I realize we are losing the old, historic fieldhouse feel for that (part) of the building,” Williams told Stover. “(But) I liked what you did to … bring it up to modern, contemporary standards. I’ll be anxious to see that all fleshed out.”

Lear called the design “pretty innovative,” and pointed to the transparency elements tied to the new facade—and the plaza—as a good way to pique the interest of passersby.

“It’s pretty attractive when you see things going on inside,” she said.

A formal hearing for approvals for the project has not yet been set by the commission.